NASA’s HyspIRI Sees the Forest for the Trees and More

To Robert Green, light contains more than meets the eye: it contains fingerprints of materials that can be detected by sensors that capture the unique set of reflected wavelengths. Scientists have used the technique, called imaging spectroscopy, to learn about water on the moon, minerals on Mars and the composition of exoplanets. Green’s favorite place to apply the technique, however, is right here on the chemically rich Earth, which is just what he and colleagues achieved this spring during NASA’s Hyperspectral Infrared Imager (HyspIRI) airborne campaign.

“We have ideas about what makes up Earth’s ecosystems and how they function,” said Green, of NASA’s Jet Propulsion Laboratory in Pasadena, Calif., who is principal investigator of the campaign’s Airborne Visible/Infrared Imaging Spectrometer (AVIRIS) instrument. “But a comprehensive understanding requires us to directly measure these things and how they change over landscapes and from season to season.” END_OF_DOCUMENT_TOKEN_TO_BE_REPLACED

END_OF_DOCUMENT_TOKEN_TO_BE_REPLACED

PROVIDENCE, R.I. [Brown University] — Just 20 years ago, the soils of the Amazon basin were thought unsuitable for large-scale agriculture, but then industrial agriculture — and the ability to fertilize on a massive scale — came to the Amazon. What were once the poorest soils in the world now produce crops at a rate that rivals that of global breadbaskets. Soils no longer seem to be the driver — or the limiter — of agricultural productivity. But a new Brown University-led study of three soybean growing regions, including Brazil, finds that soils have taken on a new role: mediating the environmental consequences of modern farming. END_OF_DOCUMENT_TOKEN_TO_BE_REPLACED

END_OF_DOCUMENT_TOKEN_TO_BE_REPLACED

Too many nutrients can cause extensive loss of marshes

Salt marshes have been disintegrating and dying over the past two decades along the U.S. Eastern Seaboard and other highly developed coastlines without anyone fully understanding why.

This week in the journal Nature, scientist Linda Deegan of the Marine Biological Laboratory (MBL) in Woods Hole, Mass., and colleagues report that nutrients–such as nitrogen and phosphorus from septic and sewer systems and lawn fertilizers–can cause salt marsh loss.

“Salt marshes are a critical interface between the land and sea,” Deegan says. “They provide habitat for fish, birds and shellfish, protect coastal cities from storms and take nutrients out of the water from upland areas, which protect coastal bays from over-pollution.” END_OF_DOCUMENT_TOKEN_TO_BE_REPLACED

END_OF_DOCUMENT_TOKEN_TO_BE_REPLACED

Going with the Flow

Scientists are releasing hundreds of floating GPS devices into the Gulf of Mexico this week near the Deepwater Horizon site to study the role of ocean currents in oil spills. The experiment is the largest in scale of its kind, deploying 300 satellite-tracked, untethered buoys, called drifters, over the course of two and a half weeks.

“We’re trying to use the drifters as a simulation of an oil spill,” said Dennis Kirwan, Mary A.S. Lighthipe Professor of Marine Studies in the University of Delaware’s College of Earth, Ocean, and Environment. “This is a big event in oceanography.” END_OF_DOCUMENT_TOKEN_TO_BE_REPLACED

END_OF_DOCUMENT_TOKEN_TO_BE_REPLACED

Water in a Changing World

Six years and about 4,000 water samples later, an outdoor experimental watershed laboratory established by University of Delaware faculty members Shreeram Inamdar and Delphis Levia at Fair Hill, Md., is now producing valuable data and novel insights into how water and chemicals move through the forest canopy, soils and watersheds, and how future climate change may impact or alter such responses.

Inamdar, associate professor in the Department of Plant and Soil Sciences, has investigated the role of soils, streams, and watersheds in leaching water and nutrients, while Levia, professor in the Department of Geography, has studied the interactions of atmosphere and the forest canopy in leaching water and nutrients. Together, they have provided a complete picture of watershed hydrology and biogeochemistry. END_OF_DOCUMENT_TOKEN_TO_BE_REPLACED

END_OF_DOCUMENT_TOKEN_TO_BE_REPLACED

COLUMBUS, Ohio – Scientists have designed a screening tool that provides a fast, easy and relatively inexpensive way to predict levels of a specific toxin in lakes that are prone to blue-green algal blooms.

Blue-green algae is not your average pond scum – rather than consisting of plant-like organisms, blue-green algae actually are cyanobacteria, and some species are linked to the production and release of the toxin microcystin into the water. Human exposure to the toxin through drinking or recreational water contact can threaten public health by causing liver damage, neurological problems and gastrointestinal illness in humans. END_OF_DOCUMENT_TOKEN_TO_BE_REPLACED

END_OF_DOCUMENT_TOKEN_TO_BE_REPLACED 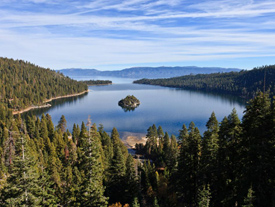 Lake Tahoe, seen here from Emerald Bay, was one of the primary validation sites for the global lake study. The lake, which straddles the borders of California and Nevada, is the largest alpine lake in North America. Image credit: NASA-JPL

WASHINGTON – In the first comprehensive global survey of temperature trends in major lakes, researchers have determined that Earth’s largest lakes have warmed during the past 25 years in response to climate change.

END_OF_DOCUMENT_TOKEN_TO_BE_REPLACED

The Potomac River in Washington, D.C. is showing multiple benefits from restoration efforts, newly published research suggests. Reduced nutrients and improved water clarity have increased the abundance and diversity of submerged aquatic vegetation (SAV) in the Potomac, according to direct measurements taken during the 18-year field study.