Water in a Changing World

Six years and about 4,000 water samples later, an outdoor experimental watershed laboratory established by University of Delaware faculty members Shreeram Inamdar and Delphis Levia at Fair Hill, Md., is now producing valuable data and novel insights into how water and chemicals move through the forest canopy, soils and watersheds, and how future climate change may impact or alter such responses.

Inamdar, associate professor in the Department of Plant and Soil Sciences, has investigated the role of soils, streams, and watersheds in leaching water and nutrients, while Levia, professor in the Department of Geography, has studied the interactions of atmosphere and the forest canopy in leaching water and nutrients. Together, they have provided a complete picture of watershed hydrology and biogeochemistry.

The two were awarded a National Science Foundation (NSF) grant in 2008 to study the mechanisms behind the leaching and exports of carbon and nitrogen from watersheds and how these chemicals evolve as they change in space — traveling through the forest canopy, soils, and stream drainage network — and as they change in time through the different seasons. 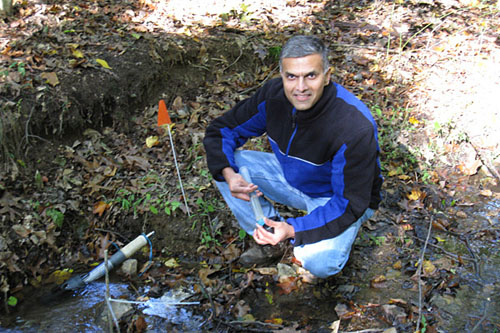 Both carbon and nitrogen are important elements of natural ecosystems but in excess can cause problems. Excess dissolved organic carbon in runoff and drinking water supplies can result in the production of cancer-causing byproducts when the water is chlorinated for disinfection. Elevated nitrogen concentrations, such as nitrate, ammonium and the organic forms, can result in degradation of water quality and the production of algal blooms in stream, ponds, and lakes and large water bodies like the Chesapeake Bay, making them unfit for swimming, fishing and other recreational activities.

To characterize the movement of water and chemicals in the watershed, Inamdar and Levia implemented an intensive network of multiple, state-of-the-art, automated instruments, sensors and sampling devices that record rainfall and weather data, streamflow runoff, groundwater elevations, soil moisture and water quality. These sensors have been recording data at a frequency of 5 to 30 minutes for the past six years.

Automated water samplers trigger whenever needed, even in the middle of the night, in response to rain events or extremely large events such as hurricanes Irene in 2011 and Nicole in 2010. Such intensive, high-frequency data, combined with laboratory analyses, have provided invaluable insights into watershed functioning and response.

For example, 30-minute groundwater level and stream runoff data has captured the daily fluctuations of water in summer in response to the evaporation from trees and soils, peaking during mid-day and reaching a minimum just before dawn.

Similarly, water samples collected during Hurricane Nicole, which occurred after an extended dry summer period, revealed very unusual patterns in carbon concentrations and quality in stream runoff, trends that were not seen during regular storms.

“What we found was a larger amount of bioavailable carbon coming out during extreme storms,” said Inamdar. “When I say bioavailable, that means the carbon can be easily consumed by aquatic organisms, so the more bioavailable carbon or nitrogen in your streams or water bodies, the greater the chances for algal growth.” 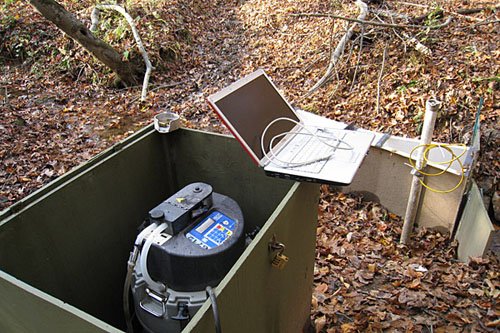 Inamdar went on to explain that the big storms, especially the ones that come after droughts, “flush out a lot of this material into the creeks and rivers which could eventually end up in the Chesapeake Bay or larger water bodies and cause potential problems.”

Climate change scenarios suggest that storms will become more intense with dry intervening periods similar to the conditions associated with the Hurricane Nicole event, and thus studying such extreme events provides a critical window into the future.

Sampling for multiple years has provided insights into how water chemistry changes with seasons. These measurements have allowed for the researchers to investigate how unique seasonal events – such as autumn leaf fall or spring emergence — alter water quality in the stream. These episodic events are also referred to as “hot moments” for their short time span, but disproportionate impact on water and ecological processes.

Inamdar cautioned that if climate change were to occur and alter the seasons, it could disrupt these processes. “With the autumn leaf fall and the spring leaf emergence, climate change is going to change the dynamics of how these ecological process effect the carbon and nitrogen cycling in watershed systems.”

The group not only looked at the amounts of carbon being put into watersheds, they also studied the carbon quality being put into the watersheds. “Is the carbon easily degradable? Is it bioavailable? We are making that level of distinction as well,” said Inamdar, noting that fresh leaves are extremely degradable while a substance like the tree bark and stems in the forest floor take a longer time to degrade.

For many undergraduate and graduate students, the outdoor watershed laboratory has served as an extremely valuable learning experience. A total of 12 graduate and undergraduate students have used the Fair Hill watershed site for their research. Six different courses from departments across the University have also used the watershed site for hands-on field visits to study the characteristics and functions of watersheds, soils, streams, and the forest canopy. 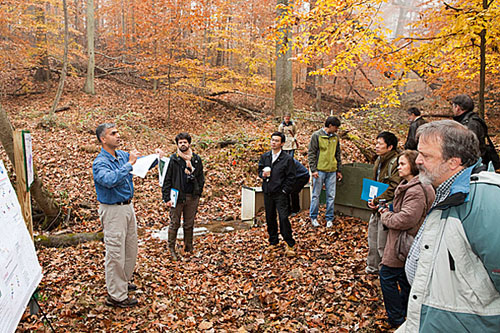 European and U.S. scientists and NSF program officers visited the Fair Hill site in November 2011 as a part of the International Critical Zone Observatory meeting, and Inamdar and Levia have also been successful in using the site as a recruitment tool for new students.

The study site is used for outreach activities with the Fair Hill Nature Center, a non-profit entity located near the study site, responsible for educating about 8,000 kindergarten through eighth grade students annually about responsible environmental stewardship. Levia has shared his knowledge of the meteorological station with the general public through the Nature Center and led field trips to highlight how water and soils can be studied in a natural setting.

The Fair Hill watershed site is now helping spawn new ideas and research partnerships. For example, Inamdar intends to study how invasive plants may be invading mid-Atlantic forested landscapes and how they may be altering the soil and water chemistry of these important ecosystems, while Levia plans to seek additional funding to establish a flux tower in the forest to study atmospheric-canopy gas exchange.