What life is like after retirement for labourers in Bangladesh – Part2

“Nothing is left there,” said 55-years old widow Fazilat Begum who lost everything in river erosion 15 years ago.

She pauses for breath and looks out onto the alley through the half-open door of her home, a room made of corrugated iron in a slum of Dhaka, the capital of Bangladesh.

“How can we return home,” said the mother of three who lost her husband more than 10 years ago. 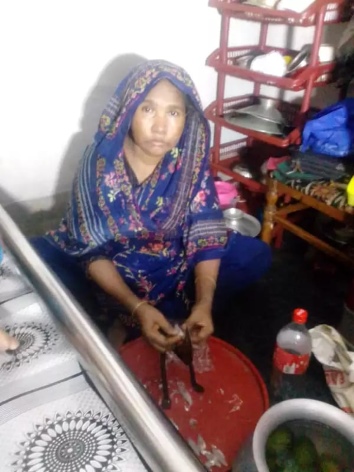 Yet, life was going on two acres of land but the mighty Meghna River gobbled up her house and croplands in Bhola, a district in south-western Bangladesh.

Every year in Bangladesh, thousands of hectares of lands are lost into the rivers that wind through the South Asian nation, destroying homes and pushing families away from their village homes.

The land erosion peaks during the June-to-October monsoon season, which brings torrential rains and swells the country’s rivers.

Erosion has long been a perennial problem of life in Bangladesh, which sits on an enormous river delta. Deforestation, extreme weather, strong currents, and siltation all contribute to erosion.

Today Fazilat shares her shed together with her 19 year’s old younger son who is working as an assistant to a mason. Her elder son and daughter got married and living separately. Fazilat gets no support from them as they themselves are struggling for survival.

After she saw the destruction of her houses and lands, she migrated to Dhaka and started to work in an apparel factory to survive. She’s just scraping by, earning around $35 a month.

After having worked in the factory, her salary increased by only $12 to reach $47 in around a decade.

“I worked in the garment factory for 10 years,” said Fazilat who is now working as a housemaid.

She has no choice but to become a housemaid after leaving work in the clothing industry, the mainstay of Bangladesh’s economy making about 85% of total exports.

“I didn’t have any savings when I left the factory work,” she said.

Fazilat was unaware of job benefits of long work in a company. 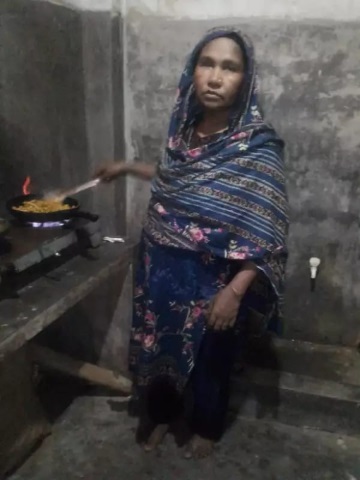 Most workers in Bangladesh are not aware of their retirement benefits like Fazilat Begum. Photo credit: Kayes Sohel

“Job benefits! I’ve never seen anybody get retirement benefits and allowances except two festival bonuses,” she said when asked about the benefits.

A worker getting older is often forced to get out of the factory as he or she fails to live up to the employer’s expectations.

Recalling some incidents she said, “Women were denied maternity leave.”

But maternity leave is guaranteed under the law. In many cases, women have to bargain with the management to get it before and after childbirth.

Many female RMG workers become socio-economically vulnerable once they retire from factories, as they get no retirement benefits and have no savings.

Out of the total workforce estimated at 6.35 crore, only 4% get pension or retirement benefits, according to Bangladesh Institute of Labour Studies (BILS). The rest 96% of the workforce, includes farmlands, apparel workers, other private-sector factory workers, and construction workers.

Non-payment of retirement benefits is a violation of the Bangladesh Labour Act 2006 that makes it mandatory for employers to pay gratuity to all workers.

The labour law also makes it mandatory to pay ‘gratuity’ equal to at least the last 30 days’ wage for each year of service to any worker with nine years’ service. In the absence of pension schemes, workers after retirement face financial stress as they become weak physically and mentally due to old age.

When the pandemic hit the country in March last year, she also lost her housemaid jobs as no employers allow any outsiders to enter their houses. Fazilat had to work at several households to make her month.

“Then I had no work during that time,” said Fazilat.

Some 49% of women in the country saw a cut in their earnings and 16.1% lost their jobs amid the Covid-19 pandemic, according to a survey of the South Asian Network on Economic Modelling conducted between January to February 2021. And only 7% of male earners suffered a decline in income during the pandemic.

“But I’m lucky this time as my younger son started to earn money,” said Fazilat.

*The investigative report is conducted by Kayes Sohel, a free-lance journalist based in Dhaka, Bangladesh.

What life is like after retirement for labourers in Bangladesh – Part1