Mobile call from one of Manik Mian’s fellows breaks his sleep everyday at 3:30 a.m., not the rising rays of the sun peeping through the window. He is 60.

Wriggling from his bed, he looks for a basket made with bamboo sticks kept at the corner of his tiny and gloomy room. This he does silently, as he does not want to disturb his wife who is sleeping beside him.

And the new day is quickly approaching. He stands to his feet, heads to the window to predict what the weather holds, knowing it affects the possibility of the day’s business.

Thanking Allah (God) for good weather or bad, he heads to join with his fellows for collecting vegetables from city’s Kawran Bazar—Bangladesh’s biggest wholesale market of daily essentials arrived at the dead of the night from other parts of the country.

He takes tea and biscuits as his breakfast to get ready for searching his bread. He packs essentials into his basket. He makes his way to the public places crowded with people to sell his items.

Items like lemon, coriander and other different vegetables are his business essentials. 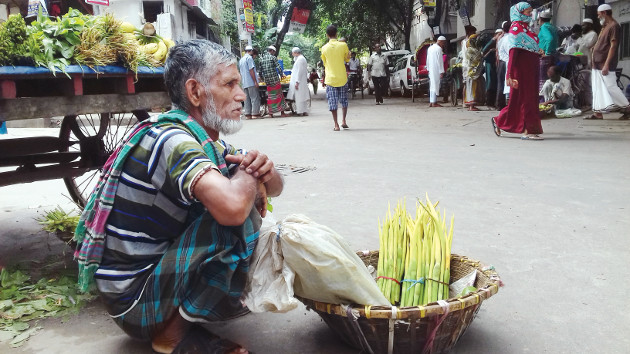 Upon arrival in a crowded place like early morning exercise spots and mosques, he starts to hawk for attracting customers as the first rays of the sun greet the day.

As crowd begins to fill the spot, he shouts, “Vegetables…here are fresh vegetables… Sir….”

Some hear and some are deaf to him.

This is the daily routine of Manik Mian, who for the past five years has been selling vegetables for eking out his living.

Hawking is one of the informal types of businesses that dominate on the streets and lanes of Dhaka city filled with hustle and bustle. 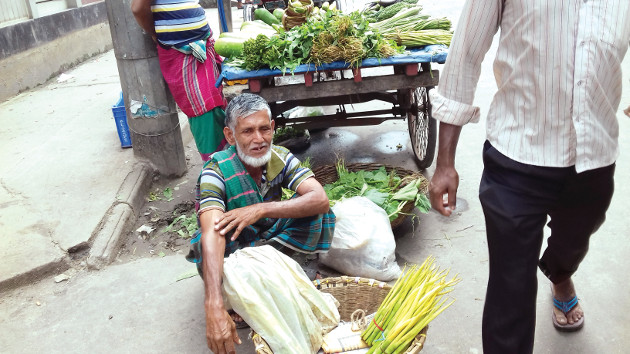 Manik who is married for 40 years said, “I have two sons. Elder son is 35 years old and younger is 30 years old”, although he said this but signs of pain could be read on his face!

When asked why he chooses such trade at this stage of his life as his two sons are now grown enough to look after him, “It’s my fate,” said Manik with a blank look on his face. His t-shirt is marked with strains of perspirations.

At this time, a customer came to him and asked about the quality of his items and how much they cost. “Taka 45……very fresh, Sir,” he said. But the customer wanted to pay him Tk. 35. He did not agree with the price as he said that it will count him losses.

Looking down to his business items, he said, “So, losses are haunting me all the time.” 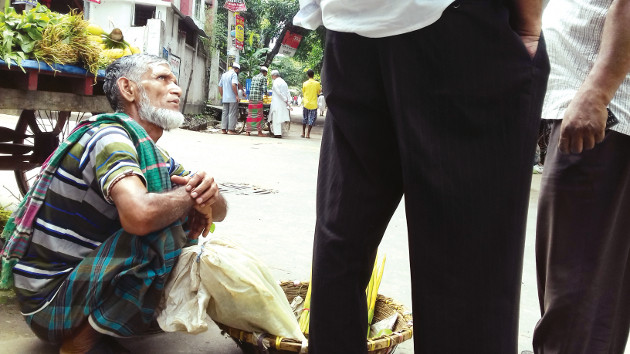 Manik who came from Barisal, the south-central part of the country and around 215 km away from Dhaka, continued, “My elder son is a garment worker who never comes to visit us. My younger son died of kidney disease six years ago. He would turn 30 today, if he were still alive!”

According to International Centre for Diarrhoeal Disease Research, Bangladesh (an international health research organization located in Dhaka), study published in 2014, showed that around 6.4 million or 4% people of Bangladesh get poorer every year due to excessive costs of healthcare.

Manik Mian is one of them.

To much of his utter dismay, most of the time he has to pay around Tk. 50 as extortion to law enforcing agencies and local ruling political activists even from his trivial earnings.

“Life is very hard,” said the old man describing that his income is not enough to make ends meet. “It becomes harder when I fail to go out due to bad weather or sickness or hartal (strike)” he said. 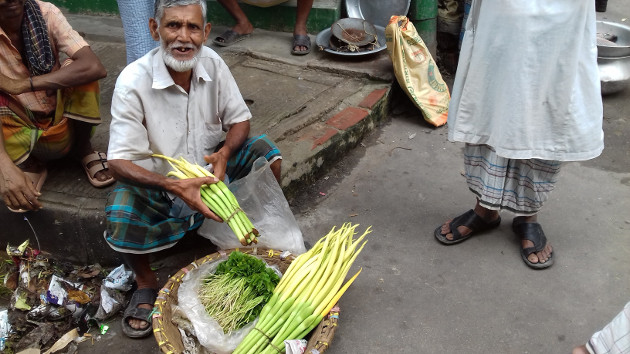 Manik explained what happens on the day when he fails to earn nothing. “I have to borrow from my fellow.”

He gets ready to go home with his unsold items while the sun is setting in the west. In a lucky day, all his items are sold out. 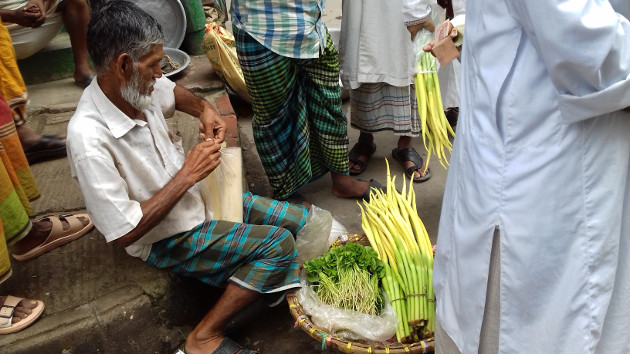 While sharing about his nights, he said, “When I get home from town, I get time with my wife and we talk about our life, destiny, hopes and despairs. It is the best time in the whole day!”

About his menu of dinner, he said, “Rice with a bit of smashed potato and some vegetables. Fish is added to the list, sometimes. Meat is out of my reach.”

“That’s my life,” said Manik while heading for home with the earnings from his merchandise at the end of the day.

*The report is conducted by Kayes Sohel, a free-lance journalist based in Dhaka. Dhaka is the heavily populated (about 15 Million) capital city of Bangladesh.