AUSTIN,
Texas — Slow slip earthquakes, a type of slow motion tremor, have
been detected at many of the world’s earthquake hotspots, including
those found around the Pacific Ring of Fire, but it is unclear how
they are connected to the damaging quakes that occur there.
Scientists at The University of Texas at Austin have now revealed the
earthquakes’ inner workings using seismic CT scans and
supercomputers to examine a region off the coast of New Zealand known
to produce them.

The insights will help scientists pinpoint why tectonic energy at subduction zones such as New Zealand’s Hikurangi subduction zone, a seismically active region where the Pacific tectonic plate dives — or subducts — beneath the country’s North Island, is sometimes released gently as slow slip, and other times as devastating, high-magnitude earthquakes.

The research was recently published in the journal Nature Geoscience as part of a special edition focused on subduction zones. 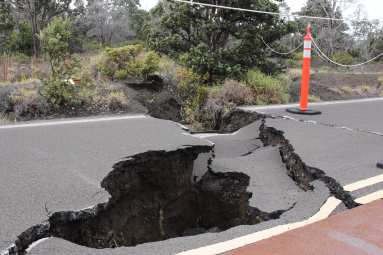 “Subduction zones are the biggest earthquake and tsunami factories on the planet,” said co-author Laura Wallace, a research scientist at UT Austin’s Institute for Geophysics (UTIG) and GNS Science in New Zealand. “With more research like this, we can really begin to understand the origin of different types of [earthquake] behavior at subduction zones.”

The study’s lead author, Adrien Arnulf, a UTIG research scientist, said that this line of research is important because understanding where and when a large subduction zone earthquake could strike can happen only by first solving the mystery of slow slip.

“If you ignore slow slip, you will miscalculate how much energy is stored and released as tectonic plates move around the planet,” he said.

Scientists know that slow slip events are an important part of the earthquake cycle because they occur in similar places and can release as much pent-up tectonic energy as a high magnitude earthquake, but without causing sudden seismic shaking. In fact, the events are so slow, unfolding over the course of weeks, that they escaped detection until only about 20 years ago.

New Zealand’s Hikurangi subduction zone is an ideal site to study slow slip quakes because they occur at depths shallow enough to be imaged at high resolution, either by listening to the internal rumblings of the Earth, or by sending artificial seismic waves into the subsurface and recording the echo.

The study’s seismic data was provided by GNS Science and the New Zealand Ministry of Economic Development. The research was funded by UTIG and an MBIE Endeavour fund for GNS Science. UTIG is a unit of the Jackson School of Geosciences.