Going with the Flow

Scientists are releasing hundreds of floating GPS devices into the Gulf of Mexico this week near the Deepwater Horizon site to study the role of ocean currents in oil spills. The experiment is the largest in scale of its kind, deploying 300 satellite-tracked, untethered buoys, called drifters, over the course of two and a half weeks.

“We’re trying to use the drifters as a simulation of an oil spill,” said Dennis Kirwan, Mary A.S. Lighthipe Professor of Marine Studies in the University of Delaware’s College of Earth, Ocean, and Environment. “This is a big event in oceanography.”

Analysis of the drifters’ travels will help researchers better understand ocean flow and improve predictions of oil plume movement should another spill occur in the Gulf or elsewhere in the world.

The experiment is being conducting by the Consortium for Advanced Research on Transport of Hydrocarbon in the Environment (CARTHE), a 12-institution collaboration supported through the Gulf of Mexico Research Initiative with funds allocated as part of BP’s settlement of the 2010 Deepwater Horizon incident.

Bruce Lipphardt, UD associate research professor, is among the CARTHE scientists aboard the research ship through Aug. 3 to release the equipment into the Gulf. 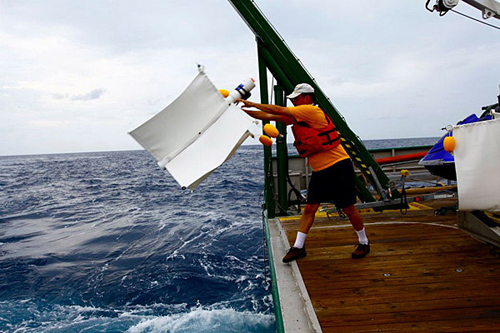 UD researcher Bruce Lipphardt releases one of 300 drifting buoys equipped with a GPS device near the Deepwater Horizon site as part of a large-scale experiment on ocean currents. Photo by Tamay Ozgokmen

Each drifter contains a satellite GPS unit normally used by hikers to alert others of their locations. As the devices float along with surface currents, they are programmed to automatically communicate their precise coordinates to researchers every five minutes.

When the first set of 90 drifters were released earlier this week, Kirwan and Helga Huntley, assistant research professor, helped track the data in real time from their offices in Newark, compiling maps of the devices’ paths using Google Earth. 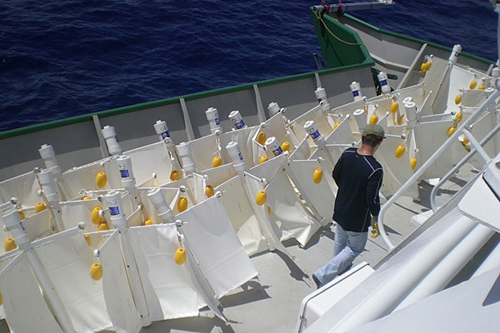 GPS-equipped drifters await release aboard the R/V Walton Smith in the Gulf of Mexico. Photo by Bruce Lipphardt

By Wednesday the team was preparing for the release of the next two sets. Typically projects such as this use only 10 to 20 drifters, making this experiment remarkable for its scope.

In tracking a larger area, the scientists aim to bring together different kinds of models used to predict the movement of fluid, such as oil, through bodies of water. Some models measure oil movement vertically from the spill site to the water’s surface, while others track circulation along the surface or predict movement near shore. Predictions made during the 2010 spill had mixed results in terms of accuracy, partly because these models were not integrated.

The work has other potential applications, such as tracking harmful algal blooms, measuring low-oxygen zones and aiding search and rescue efforts.