From a Few Bones, the Most Primitive Snake Emerges

Researchers at Yale have identified an ancient slithering creature from the time of T. rex as the most primitive known snake, a finding with implications for the debate over snake origins.

“It’s the missing-link snake,” said Nicholas Longrich, a postdoctoral fellow in Yale’s Department of Geology & Geophysics and the lead author of a paper about the lizard-like snake published July 25 online in the journal Nature. “It’s the ‘Lucy’ of snakes.”

The paper argues that snakes descend from terrestrial rather than marine ancestors, as recently proposed by others, and that snakes emerged once lizards developed long, limbless bodies for burrowing.

A relatively small creature with a serpentine body and a lizard-like head, the ancient protosnake — Coniophis precedens — represents an extremely rare transitional life form and sheds light on the divergence of snakes from the broader family of lizards.

“It moves like a snake, but it doesn’t feed like a snake,” said Longrich, who noted that Coniophis’ body is made up of vertebrae characteristic of snakes, allowing it to slither “beneath the feet of T. rex.”

In contrast to modern snakes, this elongate creature’s jaws remain fixed, limiting the size of its prey, probably to salamanders and other small lizards, according to Longrich.

Fully evolved snakes have jaws that unhinge, allowing many species to eat mammals and other prey larger than themselves. Over time, this competitive advantage contributed to exceptional diversification. Snakes today are the most diverse lizard group. 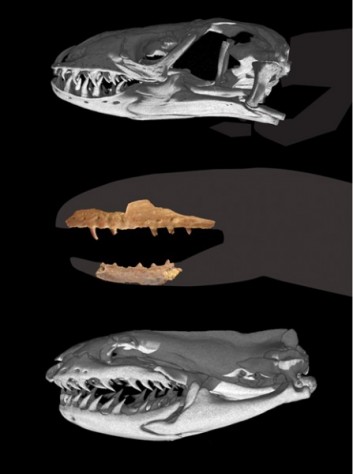 For [more than a century] Coniophis was known primarily by a single isolated vertebra, and hardly anything was known about its anatomy or lifestyle, much less its place in snake evolution. Longrich and colleagues established their more detailed picture after identifying additional tiny bones that had been collected but never studied.

These additional bones — pieces of upper and lower jaw, teeth and additional vertebrae — lay in existing museum collections around the country, including Yale’s Peabody Museum.

All known Coniophis fossils come from floodplains in eastern Wyoming and Montana — from the same soil deposits as mammals and terrestrial lizards, including the dinosaurs T. rex and Triceratops — indicating that snakes evolved as terrestrial rather than as marine animals, Longrich said. (They might have been able to swim, but did not adapt specialized features for it, he said.)

Coniophis’s status as the most primitive snake does not make it the oldest known snake. Rather, it appears to have been “a living fossil” in its own time, co-existing with more advanced snakes, as chimpanzees and humans still do, Longrich said. “It’s not the direct ancestor of modern snakes, but it tells us what the ancestor looks like,” he said. “A lot of evolution happened around it.”

The other authors of the paper are Jacques A. Gauthier, professor of geology and geophysics at Yale, and Bhart-Anjan S. Bhullar, a former Yale graduate student now at Harvard. Gauthier also is curator of vertebrate paleontology and vertebrate zoology at the Yale Peabody Museum of Natural History.

The paper is titled “A transitional snake from the Late Cretaceous of North America.” The Yale Institute of Biospheric Studies and the National Science Foundation provided support for the research.