Photovoltaics from Any Semiconductor

A technology that would enable low-cost, high efficiency solar cells to be made from virtually any semiconductor material has been developed by researchers with the U.S. Department of Energy (DOE)’s Lawrence Berkeley National Laboratory (Berkeley Lab) and the University of California (UC) Berkeley. This technology opens the door to the use of plentiful, relatively inexpensive semiconductors, such as the promising metal oxides, sulfides and phosphides, that have been considered unsuitable for solar cells because it is so difficult to tailor their properties by chemical means.

“It’s time we put bad materials to good use,” says physicist Alex Zettl, who led this research along with colleague Feng Wang. “Our technology allows us to sidestep the difficulty in chemically tailoring many earth abundant, non-toxic semiconductors and instead tailor these materials simply by applying an electric field.”

Zettl, who holds joint appointments with Berkeley Lab’s Materials Sciences Division and UC Berkeley’s Physics Department where he directs the Center of Integrated Nanomechanical Systems (COINS), is the corresponding author of a paper describing this work in the journal Nano Letters. The paper is titled “Screening-Engineered Field-Effect Solar Cells.” Co-authoring it were William Regan, Steven Byrnes, Will Gannett, Onur Ergen, Oscar Vazquez-Mena and Feng Wang.

Solar cells convert sunlight into electricity using semiconductor materials that exhibit the photovoltaic effect – meaning they absorb photons and release electrons that can be channeled into an electrical current. Photovoltaics are the ultimate source of clean, green and renewable energy but today’s technologies utilize relatively scarce and expensive semiconductors, such as large crystals of silicon, or thin films of cadmium telluride or copper indium gallium selenide, that are tricky or expensive to fabricate into devices.

“Solar technologies today face a cost-to-efficiency trade-off that has slowed widespread implementation,” Zettl says. “Our technology reduces the cost and complexity of fabricating solar cells and thereby provides what could be an important cost-effective and environmentally friendly alternative that would accelerate the usage of solar energy.” 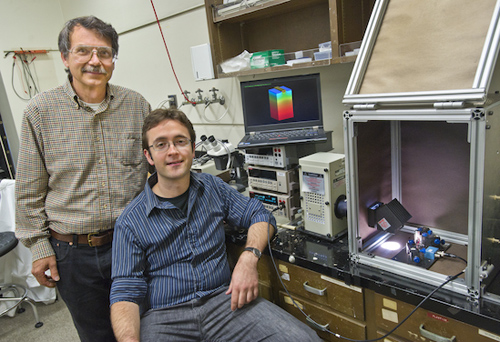 This new technology is called “screening-engineered field-effect photovoltaics,” or SFPV, because it utilizes the electric field effect, a well understood phenomenon by which the concentration of charge-carriers in a semiconductor is altered by the application of an electric field. With the SFPV technology, a carefully designed partially screening top electrode lets the gate electric field sufficiently penetrate the electrode and more uniformly modulate the semiconductor carrier concentration and type to induce a p-n junction. This enables the creation of high quality p-n junctions in semiconductors that are difficult if not impossible to dope by conventional chemical methods.

“Our technology requires only electrode and gate deposition, without the need for high-temperature chemical doping, ion implantation, or other expensive or damaging processes,” says lead author William Regan. “The key to our success is the minimal screening of the gate field which is achieved through geometric structuring of the top electrode. This makes it possible for electrical contact to and carrier modulation of the semiconductor to be performed simultaneously.” 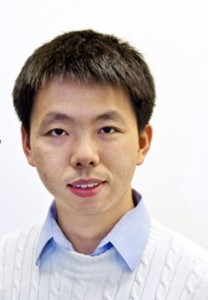 Under the SFPV system, the architecture of the top electrode is structured so that at least one of the electrode’s dimensions is confined. In one configuration, working with copper oxide, the Berkeley researchers shaped the electrode contact into narrow fingers; in another configuration, working with silicon, they made the top contact ultra-thin (single layer graphene) across the surface. With sufficiently narrow fingers, the gate field creates a low electrical resistance inversion layer between the fingers and a potential barrier beneath them. A uniformly thin top contact allows gate fields to penetrate and deplete/invert the underlying semiconductor. The results in both configurations are high quality p-n junctions.

Says co-author Feng Wang, “Our demonstrations show that a stable, electrically contacted p-n junction can be achieved with nearly any semiconductor and any electrode material through the application of a gate field provided that the electrode is appropriately geometrically structured.”

The researchers also demonstrated the SFPV effect in a self-gating configuration, in which the gate was powered internally by the electrical activity of the cell itself.

“The self-gating configuration eliminates the need for an external gate power source, which will simplify the practical implementation of SFPV devices,” Regan says. “Additionally, the gate can serve a dual role as an antireflection coating, a feature already common and necessary for high efficiency photovoltaics.”