To determine how crowd behavior emerges from individual actions, William Warren, professor of cognitive, linguistic, and psychological sciences, assembled his own crowds and engaged them in an unusual four-day experiment in Sayles Hall. The subjects were equipped with motion capture markers affixed like antennae to bike helmets.

PROVIDENCE, R.I. [Brown University] — What must the staid-faced University luminaries in those portraits around Sayles Hall have thought while they watched this scene play out for four days last week? Over and over, two to 20 young men and women in bike helmets adorned with what appeared to be five large antennae walked back and forth across a cardboard-covered floor. En route to goals marked by numbers just beneath the portraits, they dodged each other and arrangements of cardboard pillars. Each time they generated patterns of foot traffic.

The group was the “Sayles Swarm,” assembled for the week by William Warren, professor of cognitive, linguistic, and psychological sciences, and his students to generate a rich set of data on how individual actions add up to the collective behavior of crowds. The antennae were motion-capture markers. They were the only objects visible to 16 pole-mounted infrared cameras ringing the room. The floors were covered in cardboard to minimize infrared reflections. The pillars were barriers meant to perturb the patterns of walking. The patterns themselves were the point of the research. 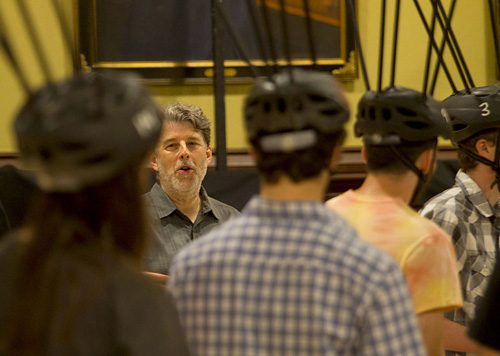 Is crowd behavior “self-organized”. William Warren prepares to send a cohort of test subjects onto the floor in Sayles Hall. Helmets with motion-capture markers and an array of infrared cameras recorded the precise movements of individuals as their groups avoided obstacles, crossed paths with other groups, and followed pathways marked on the floor. Image credit: Mike Cohea/Brown University

“What we’re after is a pedestrian model, a mathematical model of how people walk around in the world,” said Warren. “Up to this point we’ve developed a model of how a single person walks to goals, avoids obstacles, intercepts moving targets, or follows a friend. Now we’re trying to build from the bottom up to see whether such local interactions between people generate the global patterns of a human crowd, much like a flock of birds or a school of fish.”

Understanding how people move as crowds could help architects and planners improve the design of airport concourses, hotel lobbies, stadium exits, and urban centers. Crowds that morph into stampedes have turned tragic at events as diverse as soccer matches and the annual pilgrimage to Mecca (the Haj). A pedestrian model also has applications to designing robots that behave more as people do.

But Warren is primarily interested in the basic science of it all, which he describes as something of a fusion of human behavior and physics. The underlying question, he said, is whether crowd behavior is “self-organized,” attributable to local forces rather than a central plan or program.

Warren’s hypothesis is that the mathematics of crowd cohesion is something like a human version of the laws of electromagnetism. The nearer two walkers are to each other, the greater their influence on each other. That influence drops off with distance, like a magnetic field. So as a crowd gets packed closer together, he said, its behavior may become more coherent and organized.

In the experiments, Warren’s team noticed all kinds of patterns spontaneously emerge in the groups they marched around. When they directed a group of four head-on into a group of 10, for example, the groups arranged themselves into lanes to let the smaller group sluice through the larger one. The lane structure persisted even after it was no longer needed.

In another experiment they told participants to randomly veer left or right but also to stay together as a group. For a good 15 seconds at one point, he said, the entire group ended up parading around in a circle — people simply followed the “leaders” in front of them. When that finally broke down after a few people veered, little eddies of smaller groups began to swirl about. 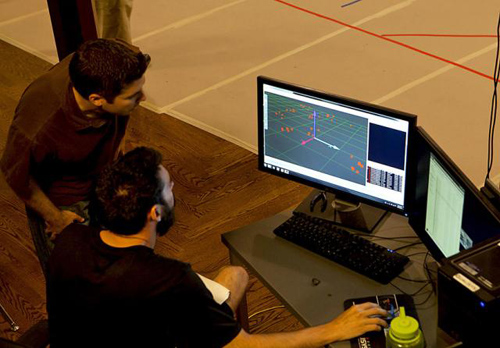 What do behaviors like that reveal about human crowds? It’s in all the data somewhere. Analysis has begun now that the Sayles Swarm has dispersed.