The number of basking sharks recorded in Britain’s seas could be increasing, decades after being protected from commercial hunting in the late 20th century.

The most comprehensive analysis ever undertaken of basking shark sightings in UK waters, by the University of Exeter, the Marine Conservation Society (MCS), Cornwall Wildlife Trust (CWT) and Wave Action, is published in  the journal Marine Ecology Progress Series.

The northeast Atlantic hosted an extensive commercial fishery for basking sharks, mainly in Norway, Ireland and Scotland, where more than 81,000 were killed between 1952 and 2004, hunted largely for their liver oil. Large-scale hunting ended in the UK in the middle of the twentieth century, though it continued at low levels in Norway until 2000.

Protected under UK legislation since 1998 and more recently under international conservation agreements, basking sharks are regularly seen off the coast of the UK during the summer, but very little is known about where and how they live for the rest of the year. The research team set about understanding patterns in summer basking shark sightings in UK waters. They analysed 20-years-worth of data from public sightings – a total of 11,781 records – from databases generated by the Marine Conservation Society and Cornwall Wildlife Trust. They combined these data with records from dedicated boat-based basking shark surveys to complete the largest study of its kind. 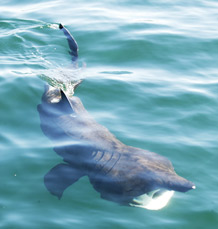 Their analysis shows a rise in the number of sightings from the 1980s through to the 2000s. It also suggests an increase in the proportion of medium and large-sized animals, suggesting an increase in the number of older sharks. Basking shark populations are believed to recover slowly from over-exploitation due to their slow growth to maturity and the relatively few offspring they produce in comparison to other fish species. These new results show that long-term protection may well be paying off, with UK basking shark populations showing increasing body size: a classic sign of recovery for over-exploited fish stocks.

The researchers identified three hotspots for sightings off the coasts of South West England, Western Scotland and the Isle of Man. Each year, the earliest records were of sharks off South West England’s coastline in April, with the latest being in Scottish waters in August. This could mean that sharks are moving northwards during the summer, possibly following the arrival of the plankton which they feed on, or may suggest the existence of different groups of sharks in each location.

Professor Brendan Godley of the University of Exeter’s Centre for Ecology and Conservation at the Cornwall Campus said: “Our research shows that basking sharks could be recovering from the extensive hunting that took place in the 20th century. We are also helping to shed light on their key habitats in British waters: important information as the use of our seas changes and grows. It is notoriously challenging to carry out long-term monitoring of marine wildlife but with the help of many hundreds of volunteers reporting their records, we have made a leap forward. Anyone who has had the experience of seeing a basking shark from our coastline will know what awe-inspiring creatures they are and our research suggests that more of us may be fortunate enough to see them in the future.”

Ruth Williams, Marine Conservation Manager for Cornwall Wildlife Trust said: “This research has proved the value of data collected by members of the public and our volunteers, and highlights the importance of public engagement with such recording schemes. It is hugely encouraging to see the positive trend in numbers of basking sharks in our waters. Collaborative working between conservation organisations and academic institutions makes the most of available resources and the results are vital to help us actively conserve and protect these magnificent animals for the future.”

Dr Jean Luc Solandt, Senior Biodiversity Policy Officer of the Marine Conservation Society said: “These exciting results show that long-term protection for basking sharks seems to be paying off – great news to celebrate the 25th anniversary of MCS Basking Shark Watch, which has been supported by thousands of people across the UK. It is only through public participation that we can see this positive change – citizen science works! The industrial demand for basking shark oil is now over, but the large basking shark gatherings we see each summer in our seas are proving to be popular wildlife spectacles. This conservation success means that these harmless giants will be here to be enjoyed by generations to come.”

This study was funded by the Natural Environment Research Council (NERC).

‘People can follow the progress of the latest basking shark tagging project that is underway in Scotland here.