PROVIDENCE, R.I. [Brown University] — Just 20 years ago, the soils of the Amazon basin were thought unsuitable for large-scale agriculture, but then industrial agriculture — and the ability to fertilize on a massive scale — came to the Amazon. What were once the poorest soils in the world now produce crops at a rate that rivals that of global breadbaskets. Soils no longer seem to be the driver — or the limiter — of agricultural productivity. But a new Brown University-led study of three soybean growing regions, including Brazil, finds that soils have taken on a new role: mediating the environmental consequences of modern farming.

The study focuses on the relationship between soils and phosphorous, a key agricultural nutrient. Typically in short supply, particularly in tropical soils, phosphorus is unique among fertilizer requirements. It is finite, irreplaceable and mined in just a few places around the world.

“If that suggests scarcity, which is a concern, the overuse of phosphorus can also pose another problem, causing harmful algal blooms in waterways,” said Stephen Porder, assistant professor of biology in the Department of Ecology and Evolutionary Biology and co-author of the study in the January 2013 edition of BioScience, posted early online. “It’s a bit of a Goldilocks problem — too much and our waterways are choked with algae, too little and we cannot produce enough food.” 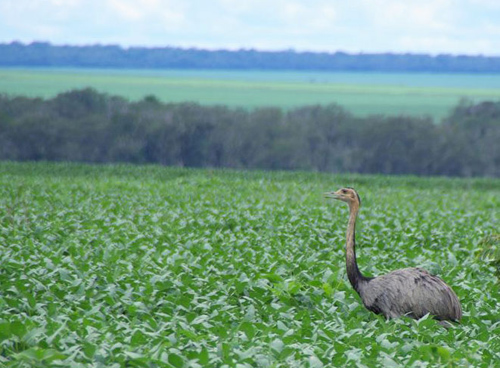 We’re not in Iowa anymore. What was once considered poor agricultural land in Brazil now has soybean yields like Iowa’s. Phosphorous is a key, but overuse can harm waterways and deplete global supplies. How much is too much? That depends on the soil. Researchers compared three soybean-growing regions. Image credit: Brown University

The new study compares the production of a single crop, soybeans, in the three places they are grown most — Iowa in the United States, Mato Grosso in Brazil, and Buenos Aires in Argentina. What the authors found was an example that illustrates how the combination of management and soil type frames the phosphorus-related concerns associated with these massive agricultural enterprises.

“Here are three regions where the crop that comes off the farm field is the same, but the fertilizer that goes in and the effects of this fertilizer on the environment are very different,” said lead author Shelby Riskin of Brown University and the Marine Biological Laboratory.

In Brazil, farmers must use a tremendous amount of the fertilizer, researchers found. In Iowa, historical overuse of phosphorous continues to harm waterways.

“Having a one-size-fits-all approach to our understanding of interaction between people and their environment via agriculture is going to lead us to some erroneous concerns and conclusions if we don’t take the regional biophysical setting into account,” Porder said. “If you are concerned about the global phosphorous supply, Brazil is your problem — they are using a ton of it. If you are concerned about lakes and rivers being filled with algae, then Iowa is your problem, and learning how to mitigate even very small amounts of loss after decades of overfertilization is a real challenge.” 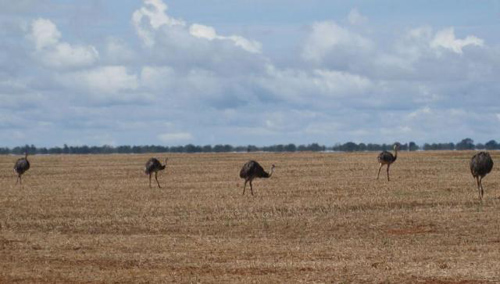 After soybean harvest in Brazil. The environmental fate of phosphorous depends on how tightly the soil holds it. Soil in Iowa stores historic overuse and releases polluting levels. Brazil has seen little pollution, but uses too much of the global supply. Argentina may have found the sweet spot. Image credit: Brown University

A tale of two regions

The Oxisol and Ultisol soils in the soybean fields of Brazil’s Mato Grosso state, which were once rain forest land, absorb phosphorous and don’t easily let go. Successful soybean cultivation there since the 1990s has only been possible with improved soybean varieties, and large inputs of lime (to raise the soil pH) and phosphorus (to overcome the soils native deficiency). These large inputs mean the soils in Mato Grosso are gaining about 31 kg phosphorus per hectare per year, according to the researchers’ measurements.

The good news in Brazil is that the deep soils have kept such a tight grip on their phosphorous that almost none of the fertilizer is ending up in nearby waterways.

The exact opposite has proven true in Iowa, where the relatively fertile Mollisol and Alfisol soils release phosphorous much more readily. Soybean farming goes back to the 1920s in Iowa and in many places excess phosphorus was used to increase and ensure high yields, leading to widespread phosphorus pollution.

Since 1995 Iowa farmers have used much less phosphorous, adding only a net of 3 kg per hectare per year, but local lakes and rivers are being polluted because the soil is still releasing all that phosphorous applied long ago. Half of the waterways in Iowa assessed under the Clean Water Act are listed as impaired. 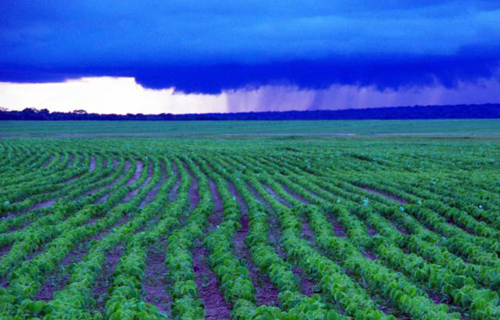 If there is a best of both worlds, according to Riskin and Porder, it seems to be in the Buenos Aires province of Argentina, which has soils similar to Iowa’s. There farmers who started growing soybeans much more recently than their Iowan counterparts have been able to achieve similar yields without applying much phosphorous. Until 2000, the researchers found, soybeans were drawing more phosphorous out of the soil than farmers were adding, leading to net deficits of phosphorus without much pollution. More recently, the Argentines have been adding more of the fertilizer, leading to a roughly break-even phosphorous budget.

“They are in sort of a sweet spot in a way,” Porder said. “They have these very fertile soils and came to the game a little bit later. They essentially mined the soils for nutrients for a while and now they are bringing it back into balance.”

By 2050, Porder said, the world’s farmers will need to need to grow about 70 percent more food. With limited supplies both of phosphorous and clean water, farmers must balance adding enough phosphorus to maximize yields but little enough to avoid unintended losses.

Learning the lessons of Brazil and Iowa, Porder said, may allow new farmers in places where productivity is not yet but could be great to avoid polluting water and exhausting the world’s phosphorous supply.

“With increasing global demands from a growing population and growing appetites for commodities like meat, we will need to produce much more from cropland over the coming decades,” said Riskin. “To do this least badly, that is, with a minimum of environmental costs, will be one of the great environmental challenges of the 21st century. Phosphorus in soybeans is just one example, but illustrates a broader point: We have to produce a lot while being aware of local and global environmental costs. What this means for management is different in different places.”

The paper’s other authors are Christopher Neill of the Marine Biological Laboratory, Meagan Schipanski of Pennsylvania State University and Elena Bennett of McGill University.

Funding from the National Science Foundation (Grant: DEB-0640661) and the Andrew Mellon Foundation and collaboration with the Instituto de Pesquisa Ambiental da Amazonia supported the research.