Berkeley, Calif., Dec. 2012 — Researchers with the U.S. Department of Energy (DOE)’s Lawrence Berkeley National Laboratory (Berkeley Lab) and the University of California, Berkeley, have developed an elegant and powerful new microscale actuator that can flex like a tiny beckoning finger. Based on an oxide material that expands and contracts dramatically in response to a small temperature variation, the actuators are smaller than the width of a human hair and are promising for microfluidics, drug delivery, and artificial muscles.

A single actuator curls and extends as the temperature is changed by 15 degrees Celsius, as shown in this micrograph. On right, a palm-like configuration of actuators all curl together, opening and closing like a tiny hand. The scale bar is 50 microns. Image credit: Berkeley Lab

Wu is corresponding author of a paper appearing in Nano Letters this month that reports these findings, titled “Giant-Amplitude, High-Work Density Microactuators with Phase Transition Activated Nanolayer Bimorphs.” As often happens in science, Wu and his colleagues arrived at the microactuator idea by accident, while studying a different problem.

Vanadium dioxide is a textbook example of a strongly correlated material, meaning the behavior of each electron is inextricably tied to its neighboring electrons. The resulting exotic electronic behaviors have made vanadium dioxide an object of scientific scrutiny for decades, much of it focused on an unusual pair of phase transitions.

When heated past 67 degrees Celsius, vanadium dioxide transforms from an insulator to a metal, accompanied by a structural phase transition that shrinks the material in one dimension while expanding in the other two. For decades, researchers have debated whether one of these phase transitions drives the other or if they are separate phenomena that coincidentally occur at the same temperature.

Wu shed light on this question in earlier work published in Physical Review Letters, in which he and his colleagues isolated the two phase transitions in single-crystal nanowires of vanadium dioxide and demonstrated that they are separable and can be driven independently. The team ran into difficulty with the experiments, however, when the nanowires broke away from their electrode contacts during the structural phase transition. 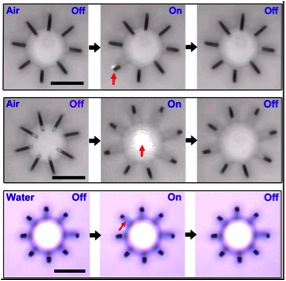 A pulse of laser light can induce the microactuator to flex. In this microscope image, a palm-like array of actuators flex one at a time (top panel) or all at once (middle panel). The lower panel shows individual fingers flexing underwater—a capability that makes the device suitable for biological applications. Image credit: Berkeley Lab

“At the transition, a 100-micron long wire shrinks by about 1 micron, which can easily break the contact,” says Wu, who has a dual appointment as a professor in UC Berkeley’s department of Materials Sciences and Engineering. “So we started to ask the question: this is bad, but can we make a good thing out of it? And actuation is the natural application.”

To take advantage of the shrinkage, the researchers fabricated a free-standing strip of vanadium dioxide with a chromium metal layer on top. When the strip is heated via a small electrical current or a flash of laser light, the vanadium dioxide contracts and the whole strip bends like a finger.

“The displacement of our microactuator is huge,” says Wu, “tens of microns for an actuator length on the same order of magnitude—much bigger than you can get with a piezoelectric device—and simultaneously with very large force. I am very optimistic that this technology will become competitive to piezoelectric technology, and may even replace it.”

Piezoelectric actuators are the industry-standard for mechanical actuation on micro scales, but they’re complicated to grow, need large voltages for small displacements, and typically involve toxic materials such as lead. “But our device is very simple, the material is non-toxic, and the displacement is much bigger at a much lower driving voltage,” says Wu. “You can see it move with an optical microscope! And it works equally well in water, making it suitable for biological and microfluidic applications.”

The researchers envision using the microactuators as tiny pumps for drug delivery or as mechanical muscles in micro-scale robots. In those applications, the actuator’s exceptionally high work density—the power it can deliver per unit volume—offers a great advantage. Ounce for ounce, the vanadium-dioxide actuators deliver a force three orders of magnitude greater than human muscle. Wu and his colleagues are already partnering with the Berkeley Sensing and Actuation Center to integrate their actuators into devices for applications such as radiation-detection robots for hazardous environments.

The team’s next goal is to create a torsion actuator, which is a much more challenging prospect. Wu explains: “Torsion actuators typically involve a complicated design of gears, shafts and/or belts, and so miniaturization is a challenge. But here we see that with just a layer of thin-film we could also make a very simple torsional actuator.”

“Decoupling of Structural and Electronic Phase Transitions in VO2”