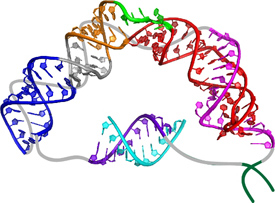 Telomerase is an enzyme that maintains the DNA at the ends of our chromosomes, known as telomeres. In the absence of telomerase activity, every time our cells divide, our telomeres get shorter. This is part of the natural aging process, as most cells in the human body do not have much active telomerase. Eventually, these DNA-containing telomeres, which act as protective caps at the ends of chromosomes, become so short that the cells die.

But in some cells, such as cancer cells, telomerase, which is composed of RNA and proteins, is highly active and adds telomere DNA, preventing telomere shortening and extending the life of the cell.

UCLA biochemists have now produced a three-dimensional structural model of the RNA “core domain” of the telomerase enzyme. Because telomerase plays a surprisingly important role in cancer and aging, understanding its structure could lead to new approaches for treating disease, the researchers say.

“We still do not know how the RNA and the proteins cooperate to do this magical thing —  extend the ends of our telomeres — but we are now one step closer to understanding that,” said Juli Feigon, a UCLA professor of chemistry and biochemistry and senior author of the research, which was published Nov. 2 in the print edition of the journal Proceedings of the National Academy of Sciences.

“Telomerase is the most amazing complex,” said Feigon, who began studying telomere DNA structure in the early 1990s, which led to her interest in telomerase. “Some people think if we activate telomerase, we can live forever. However, we don’t want our cells to be able to divide indefinitely. As they get older and older, they accumulate all kinds of DNA damage and defects; that is why we don’t want to have a high level of telomerase activity in most of our cells.”

“There is so much potential for treating disease if we understand how telomerase works,” Feigon said.

She and members of her laboratory are studying its structure at a very detailed level, which provides insights into how telomerase functions. However, Feigon emphasized that her laboratory conducts basic scientific research and is not involved in cancer treatment.

The research was federally funded by the National Institutes of Health, with American Recovery and Reinvestment Act funds, and the National Science Foundation.

The core domain consists of three pieces: a “pseudoknot” required for telomerase activity, at whose core three strands of RNA come together to form a triple helix; an “internal bulge loop,” which had been largely ignored but turns out to be quite significant; and a “helical extension” — all of which Feigon and her colleagues modeled using a new method they developed.

“We have the first useful model of the core domain of telomerase RNA,” said Feigon, who was elected to the National Academy of Sciences in 2009. “We have put the three pieces together to produce a three-dimensional model of the core domain, the first time this has ever been done at a high resolution. This is exciting in terms of learning how telomerase works because it is the first time we have had a useful picture of the shape of this critical part of the RNA.”

The new research, she said, could lead to targets for drug intervention.

“If you want to target drugs to telomerase, you need to know what it’s doing at every stage of the cell cycle,” Feigon said “If you know the three-dimensional structure of any protein or nucleic acid that is involved in essential activities in the cell, then the ability to target it with small molecules or other pharmaceuticals to either inhibit or activate it is helped tremendously.”

There are diseases in which a mutation in telomerase RNA or in a telomerase protein results in inactivation of telomerase.

“We try to see the global picture with structural biology, including learning how telomerase functions and how to make it dysfunctional,” said Qi Zhang, a UCLA postdoctoral scholar in Feigon’s laboratory and lead author of the PNAS paper. “This is a very large piece that we are reporting.”

The scientists who discovered how chromosomes are protected by telomerase won the 2009 Nobel Prize in physiology or medicine. Yet there is still very little known about the structural biology of the enzyme; its overall three-dimensional structure is not known. Almost all of the three-dimensional structural information about vertebrate telomerase’s RNA component has come from Feigon’s laboratory.

“While much is known of telomerase’s biochemistry, little is known about how the RNA component and the protein component interact in the three-dimensional structure,” Feigon said.

Feigon and her colleagues put together the three pieces — the pseudoknot, the internal bulge loop and the helical extension — to create a three-dimensional model. They determined the structures using state-of-the-art nuclear magnetic resonance (NMR) spectroscopy.

“We decided to study the internal bulge loop’s structure and its dynamics,” Feigon said. “What we found when we determined the structure was, first, it is quite unusual, with an unexpected fold that causes a large bend in the RNA. We then did biochemical studies that showed that the bend and its flexibility is important for telomerase activity. The internal bulge loop turns out to be really important in determining the topology of this domain, which was unpredicted.”

“We are learning how the internal bulge loop functions, and we have characterized its role in the catalytic activity,” said Zhang, who holds a Baltimore Family Fellowship from the Life Sciences Research Foundation.

The structure and dynamics of the internal bulge loop are important for catalytic activity.

“We have found a rare structure,” Feigon said. “We studied the database of all the structures of RNA that have been solved, and it turns out that one other structure has the same type of five-nucleotide bulge. The other one is from an RNA domain of the hepatitis C virus. That was a huge surprise for us. And the bigger surprise is that the nucleotide sequence of that bulge is completely different, but the structure is almost identical. That particular bulge is also critical to the function of the virus; if you disrupt that bulge, the hepatitis C virus becomes less infectious.”

For telomerase to be active, it needs the telomerase RNA and a protein called human telomerase reverse transcriptase. Chromosomes are composed of strings of bases — nucleotides— represented by the letters A, C, G and T. The ‘C’ base always binds to ‘G,’ while ‘A’ binds to ‘T.’ The bases combine to make three-letter codes that specify an amino acid; the corresponding amino acids combine to make proteins.

“Within telomerase, there is an RNA template that is used to code for the telomere DNA repeats,” Feigon said. “If you have the letter ‘A,’ it puts in the letter ‘T,’ and if you have a ‘G,’ it puts in a ‘C.’ This method of copying, from RNA to DNA instead of copying DNA to RNA, is called reverse transcription. The core domain includes the template which does this. HIV also has a reverse transcriptase that copies from RNA to DNA.

“Reverse transcriptases normally copy RNA to DNA but do not contain RNA; in this enzyme, the protein requires the RNA component to function.

“Telomerase is unique because the template is part of the enzyme, and it is used to copy one telomere repeat and then starts over and makes another, and another, all attached to one another. That is how telomerase extends the telomeres,” she said. “Telomerase has its own internal piece of RNA that is used to copy the DNA, but this ‘template’ is only approximately 10 of the 451 nucleotides.”

Telomerase has been extremely difficult to characterize structurally because of its size and complexity and its low level in normal cells.

Feigon’s laboratory studies the 3-D structures of DNA and RNA and how proteins and DNA and RNA recognize one another to switch genes on and off in cells. A member of UCLA’s faculty since 1985, Feigon was the first UCLA scientist to use NMR to determine DNA and RNA structures. She and her colleagues utilize a range of molecular biological, biochemical and biophysical techniques.

Serendipity often plays a prominent role in science, and this is another example. When Feigon began her research on telomeres and telomerase in the early 1990s, she was not even thinking about cancer. Instead, she was interested in studying DNA structure.