The Genetics of Self-Incompatibility 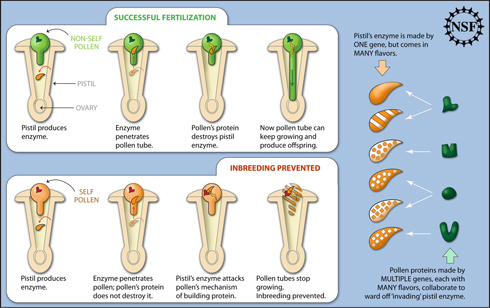 About the image: The female part of the petunia flower secretes an enzyme that is designed to deter pollen tube growth, thereby preventing fertilization. However, in the cases that the pollen has come from a genetically different plant, the pollen produces its own protein that combats the pistil’s enzyme. With the enzyme out of the way, the pollen tube can keep growing and fertilization can occur. Image credit: Zina Deretsky, National Science Foundation

Inbreeding is a bad strategy for any organism, producing weak and problematic offspring. So imagine the challenge of inbreeding prevention in a plant where male and female sexual organs grow right next to each other! Such is the genetic conundrum faced by the petunia.

A research team led by Teh-hui Kao of Penn State University, in collaboration with a team led by Professor Seiji Takayama at the Nara Institute of Science and Technology in Japan, presents new insights into the petunia’s complicated genetic dance of self-incompatibility in the November 5 issue of Science magazine. Kao’s research was supported by the National Science Foundation.

It turns out that the mechanisms behind petunia inbreeding prevention are very similar to those in an immune response. Just like vertebrates have many types of T-cell receptors that specialize in fighting different antigens, petunia pollen proteins are encoded by different types of related genes that all collaborate together to help fight destructive enzymes in the petunia pistil. Through this complicated system, only correct pollen (pollen produced by a plant genetically different from the pistil) will thrive, grow and complete fertilization.

The petunia pistil produces an enzyme that is harmful to any pollen’s RNA production. Every pollen grain that makes contact with the pistil has its own set of proteins. If the pollen is from a genetically different plant, its proteins destroy the pistil enzyme. With the poisonous pistil enzyme out of the way, the pollen tube can keep growing.

If, however, the pollen comes from the same genetic lineage as the pistil, the pollen will lack the appropriate protein to combat the RNA-destroying enzyme from the pistil. In this situation, the enzyme will wreak havoc on the functionality of the pollen, and will prevent the pollen tube from continuing to grow. Fertilization will not be able to occur.

In 1994, Kao’s lab identified a gene in petunias that encodes the RNA-destroying enzyme in the pistil. In 2004, the same lab found another gene on the male side, in the pollen, that interacts with the pistil protein.

Today, the researchers report that it is not just one, but many related genes on the male side of the equation that together help thwart female enzyme attack.

Kao, who has studied self-incompatibility in petunias for more than two decades, marvels: “The more I get to know this system, the more I respect plants. They have a truly sophisticated system to prevent inbreeding!”