Scientists to Spy on People’s Dreams and Thoughts 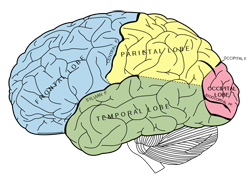 Until now it was believed that a person is unable to read the thoughts of fellow human beings. “Spying” on the dreams of another person appeared unrealistic. However, recent research by American scientists revealed that both these things are quite possible. Overly complex devices and paranormal abilities are not required to do so.

Recently, a respectable scientific journal Nature published an article that ten years ago would have been considered a fiction and would not have been publication at all. A group of American researchers led by Dr. Moran Cerf claims to have found a way to electronically records and decipher human dreams and thoughts. No complicated devices are required. The entire transcript can successfully go through an electroencephalograph – a device that for decades has been used by neuroscientists around the world.

Nearly everyone at least once in a lifetime had a session of electroencephalography, but perhaps not everyone understands the principle of this device. In fact, it is very simple. When two (or more) nerve cells exchange information, a weak electrical disturbance occurs that is called nerve impulses by scholars. These impulses, like any such disturbance, create an electric field that can be captured by special sensors attached to the outer surface of human skull.

However, while this method is found to be very accurate in detecting patterns of neuronal activity of a certain area of the brain, it cannot detect the interaction between two specific neurons, because it never happens that a specific pair of cells works while its neighbors around are silent. In fact, every second millions of impulses are born and die out in the brain, which is merged to encephalograph sensors into a single image.

In order to identify and document the interaction between each pair or chain of neurons, sensors should be placed inside the head, on the very surface of the brain. That, contrary to popular notion, is not painful (there are no pain receptors on the surface of the brain), but technically quite difficult. Therefore, at present, this method is used only in exceptional cases, such as the diagnosis and treatment of people with epilepsy.

These were the patients the team of Dr. Cerf worked with. During the study, the patients who had electrodes attached to their brains were shown images such as photographs of Marilyn Monroe, and the EEG recorded which neurons were particularly active. Such penetration into the skull allowed the experimenters to link some images of objects, people and animals with the activity of various neural chains.

Dr. Cerf believes that, based on similar studies, it will be possible in the future to build a detailed functional map of all nerve cells of the brain, which will trace the process of creation and development of every thought and association. Despite the fact that at this point only brain’s response to visual images has been investigated, it is also possible to map the areas responsible for perception of auditory, tactile, olfactory and other signals, as well as the associative zones – places where processing and analysis of primary data received from the senses takes place.

Scientists believe that the same method can allow penetration into people’s dreams, because, knowing which neurons are activated during dreaming, the researcher can answer what visual images a person saw while sleeping.

Interestingly enough, electrical stimulation of the brain may also help researchers in the mapping of the “thinking” processes. At some point of time, Canadian neurosurgeon Wilder Penfield Graves during surgeries stimulated various parts of the brain by weak electric current discharges. His patients saw patterns from their past, with colors and sound. All patients were aware that they were on a surgical table. This means that past events are stored in our memory as “video files” that preserve quality for a long time.

The “deciphers” of dreams faced another interesting challenge – to see what is stored in each memory cell. This information can be very useful for creating “dream maps” because such information is often used as the material for our dreams. Some scientists doubt the existence of a universal database of memories in the human brain. They believe that the structure and location are specific to each individual.

“According to my observations, it appears that people have certain areas of the brain where the images “settle down.” This area is located in the temporal region of the right hemisphere,” says Oleg Levashov, a researcher of the Research Department of Neurology Brain Research Center of RAS. “However, in some people these images may be “mixed,” for example, located slightly to the left or slightly to the right.

Theoretically, a map of neuronal activity can be created, but it will be slightly different for everybody.”
Nevertheless, such data does not contradict the possibility to build a dream map and thoughts map for each individual. Not surprisingly, such studies have already attracted attention of the U.S. military experts, who immediately after the publication of the article provided a grant in the amount of four million dollars to develop technology that allows reading people’s minds.

The Pentagon believes that development of such technology in the future could lead to invention of a device that will read the thoughts of soldiers with brain injuries. It could also be used during interrogations of prisoners of war. The joint project involves scientists from the University of California, Irvine, Carnegie Mellon University and the University of Maryland .

At the same time, many scholars doubt that it is possible to develop thin and high precision tools in such a short time and construct a complete map of mental activity of the brain.

However, despite all the technical and ethical difficulties, the first step towards creating a mind-reading device has already been made by scientists. Perhaps in the future everyone will be able to record their thoughts and dreams to a media device and share the most enjoyable episodes with friends.