Melt water flowing through ice sheets via crevasses, fractures and large drains called moulins can carry warmth into ice sheet interiors, greatly accelerating the thermal response of an ice sheet to climate change, according to a new study involving the University of Colorado at Boulder.

The new study showed ice sheets like the Greenland Ice Sheet can respond to such warming on the order of decades rather than the centuries projected by conventional thermal models. Ice flows more readily as it warms, so a warming climate can increase ice flows on ice sheets much faster than previously thought, said the study authors.

“We are finding that once such water flow is initiated through a new section of ice sheet, it can warm rather significantly and quickly, sometimes in just 10 years, ” said lead author Thomas Phillips, a research scientist with Cooperative Institute for Research in Environmental Sciences. CIRES is a joint institute between CU-Boulder and the National Oceanic and Atmospheric Administration. 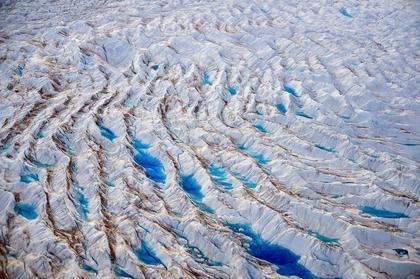 Conventional thermal models of ice sheets do not factor in the presence of water within the ice sheet as a warming agent, but instead use models that primarily consider ice-sheet heating by warmer air on the ice sheet surface. In water’s absence, ice warms slowly in response to the increased surface temperatures from climate change, often requiring centuries to millennia to happen.

But the Greenland ice sheet is not one solid, smooth mass of ice. As the ice flows towards the coast, grating on bedrock, crevasses and new fractures form in the upper 100 feet of the ice sheet. Melt water flowing through these openings can create “ice caves” and networks of “pipes” that can carry water through the ice and spreading warmth, the authors concluded.

To quantify the influence of melt water, the scientists modeled what would happen to the ice sheet temperature if water flowed through it for eight weeks every summer — about the length of the active melt season. The result was a significantly faster-than-expected increase in ice sheet warming, which could take place on the order of years to decades depending on the spacing of crevasses and other “pipes” that bring warmer water into the ice sheet in summer.

“The key difference between our model and previous models is that we include heat exchange between water flowing through the ice sheet and the ice,” said Rajaram.

Several factors contributed to the warming and resulting acceleration of ice flow, including the fact that flowing water into the ice sheets can stay in liquid form even through the winter, slowing seasonal cooling. In addition, warmer ice sheets are more susceptible to increases of water flow, including the basal lubrication of ice that allows ice to flow more readily on bedrock.

A third factor is melt water cascading downward into the ice, which warms the surrounding ice. In this process the water can refreeze, creating additional cracks in the more vulnerable warm ice, according to the study.

Taken together, the interactions between water, temperature, and ice velocity spell even more rapid changes to ice sheets in a changing climate than currently anticipated, the authors concluded. After comparing observed temperature profiles from Greenland with the new model described in the paper, the authors concluded the observations were unexplainable unless they accounted for warming.

“The fact that the ice temperatures warm rather quickly is really the key piece that’s been overlooked in models currently being used to determine how Greenland responds to climate warming,” Steffen said. “However, this process is not the ‘death knell’ for the ice sheet. Even under such conditions, it would still take thousands of years for the Greenland ice sheet to disappear, Steffen said.

This study was funded by NASA’s Cryosphere Science Program.