UCLA researchers have discovered a type of cell that is the “missing link” between bone marrow stem cells and all the cells of the human immune system, a finding that will lead to a greater understanding of how a healthy immune system is produced and how disease can lead to poor immune function.

The research was done using human bone marrow, which contains all the stem cells that produce blood during post-natal life.

“We felt it was especially important to do these studies using human bone marrow, as most research into the development of the immune system has used mouse bone marrow,” said the study’s senior author, Dr. Gay Crooks, co-director of UCLA’s Eli and Edythe Broad Center of Regenerative Medicine and Stem Cell Research and a co-director of the cancer and stem-cell biology program at UCLA’s Jonsson Comprehensive Cancer Center. “The few studies with human tissue have mostly used umbilical cord blood, which does not reflect the immune system of post-natal life.”

The research team was “intrigued to find this particular bone marrow cell, because it opens up a lot of new possibilities in terms of understanding how human immunity is produced from stem cells throughout life,” said Crooks, a professor of pathology and pediatrics. 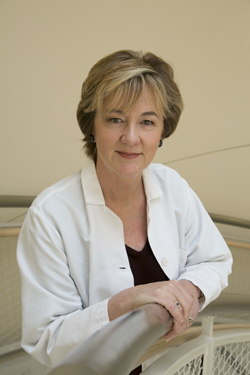 Understanding the process of normal blood formation in human adults is a crucial step in shedding light on what goes wrong during the process that results in leukemias, cancers of the blood.

The findings appear Sept. 2 in the early online edition of the journal Nature Immunology.

Before this study, researchers had a fairly good idea of how to find and study the blood stem cells of the bone marrow. The stem cells live forever, reproduce themselves and give rise to all the cells of the blood. In the process, the stem cells divide and produce cells in intermediate stages of development called progenitors, which make various blood lineages, like red blood cells or platelets.

Crooks was most interested in the creation of the progenitors that form the entire immune system, which consists of many different cells called lymphocytes, each with a specialized function to fight infection.

“Like the stem cells, the progenitor cells are also very rare, so before we can study them, we needed to find the needle in the haystack,” said Lisa Kohn, a member of the UCLA Medical Scientist Training Program and first author of the study.

Previous work had found a fairly mature type of lymphocyte progenitor with a limited ability to differentiate, but the new work describes a more primitive type of progenitor primed to produce the entire immune system, Kohn said.

Once the lymphoid-primed progenitor had been identified, Crooks and her team studied how gene expression changed during the earliest stages of its production from stem cells.

“The gene expression data convinced us that we had found a unique stage of development in the immune system,” Crooks said. “There was a set of genes that the lymphoid-primed cell shares with the bone marrow stem cells and a unique gene expression of its own once it becomes active. This data provided us with an understanding of what genes are important in creating all the cells of the immune system. The information could allow us to manipulate bone marrow to help create a stronger immune system.”

As a bone-marrow transplant clinician who treats children with many diseases, including leukemia and immune deficiency, Crooks is keenly interested in how the immune system is made and, more specifically, in potential new ways to speed that process along in her patients, whose immune systems are wiped out prior to transplant.

“The identification of a progenitor in human bone marrow primed for full lymphoid differentiation will now permit delineation of the molecular regulation of the first stages of lymphoid commitment in human hematopoiesis,” the study states. “It will also allow understanding of how these processes are affected during aberrant hematopoiesis in disease states.”

The study was funded by the California Institute for Regenerative Medicine, the National Institutes of Health (PO1 HL073140 and RO1 HL077912), the Broad Stem Cell Research Center at UCLA and UCLA’s Jonsson Comprehensive Cancer Center.