From the circuit board on up, the new phones – the Nokia Lumia 820 and the Nokia Lumia 920 — were designed to take full advantage of Windows Phone 8, Microsoft’s forthcoming phone operating system, says Terry Myerson, corporate vice president of Microsoft’s Windows Phone Division. At the press event, Nokia showed off the two next-generation Lumias, available in a number of colors, as well as some accessories, including a wireless chargers and speakers.

“These are exciting times around Windows Phone,” Myerson says in a blog post. “In June we showed the first glimpses of Windows Phone 8, our most innovative release ever, and one we can’t wait to get in the hands of people around the world later this year.” 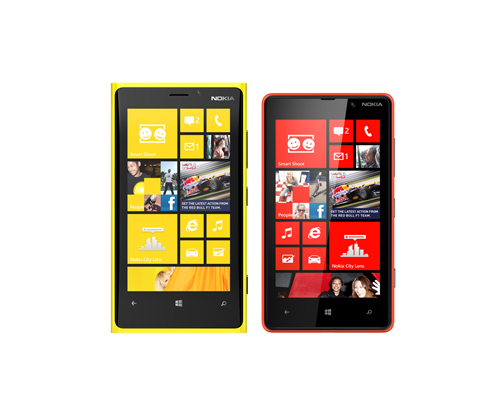 The Nokia Lumias are part of a wide lineup of Windows Phone 8 phones set to hit the market later this year.

Windows Phone 8 Start Screens. From the circuit board on up, the new Nokia phones were built for Windows Phone 8. The new Windows 8 operating system lets users personalize their start screen with a new palette of theme colors and three sizes of Live Tiles to choose from. Image credit: Microsoft

Jo Harlow, executive vice president of Nokia, says the Lumia 920 offers Nokia PureView, cutting-edge technology that makes it possible for smartphone cameras to take the kinds of images usually only seen on a standalone SLR camera.

“With the Nokia Lumia 920 we have made it possible to shoot pictures and video at home, outdoors, in a restaurant or even at night, and come out with professional-looking results,” Harlow says.