Today’s consumers switch between media forms so often – from TV to laptops to smart phones – that capturing their attention with advertising has gone, as one CEO explained, from shooting fish in a barrel to shooting minnows. 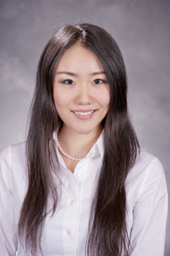 Business scholar Chen Lin has developed the most accurate model yet for predicting when consumers are using media such as TV, computers and smart phones. Image credit: Michigan State University

Now, a Michigan State University business scholar and colleagues have developed the most accurate model yet for targeting those fast-moving minnows. The research-based model predicts when during the day people use the varying forms of media and even when they are using two or more at a time, an increasingly common practice known as media multiplexing.

That’s good news for companies struggling to predict when to buy ads on the Internet, television and radio, and in print publications. Previous models for predicting when consumers use media were 60 percent-70 percent accurate; the new model led by MSU’s Chen Lin has proved 97 percent accurate.

“For businesses, our model does a much better job of predicting where your customers are at any given time,” said Lin, assistant professor of marketing. “It represents a significant advancement over other models because much of that work assumed people consumed one type of media at a time.”

The study, published in the academic journal Marketing Science, is based on a survey of the media-consumption habits of nearly 2,000 U.S. residents. Lin and colleagues used the survey data to create their complex forecasting model.

Among the study findings:

Chen also said she was surprised to find consumers still value print media at certain times, particularly in the morning. Print was especially popular when it was paired with other forms of media.

“The old thinking is that print is endangered, but we found that it doesn’t need to be eliminated,” Lin said. “Print can have a second life if it’s cleverly paired with new media such as personal computers and smart phones.”

In fact, Lin said ad buyers should stop considering the different media forms as competing and instead view them as complimentary. For example, print ads should be partnered with radio and Internet media forms in the key time slots when consumers are likely to be using all three forms.

“Our findings underscore the need to move away from a competitive mindset to a coordinated viewpoint,” Lin said, “as consumers increasingly use combinations of media forms in short periods.”

Lin’s co-authors are Sriram Venkataraman from the University of North Carolina and Sandy Jap from Emory University.