A Neural Basis for Benefits of Meditation

Mindfulness meditation training in awareness of present moment experience, such as body and breath sensations, prevents depression and reduces distress in chronic pain. In a new paper, Brown University scientists propose a neurophysiological framework to explain these clinical benefits.

The proposal, based on published experimental results and a validated computer simulation of neural networks, derives its mechanistic framework from the intimate connection in mindfulness between mind and body, since standardized mindfulness meditation training begins with a highly localized focus on body and breath sensations. This repeated localized sensory focus, the scientists write, enhances control over localized alpha rhythms in the primary somatosensory cortex where sensations from different body are “mapped” by the brain. 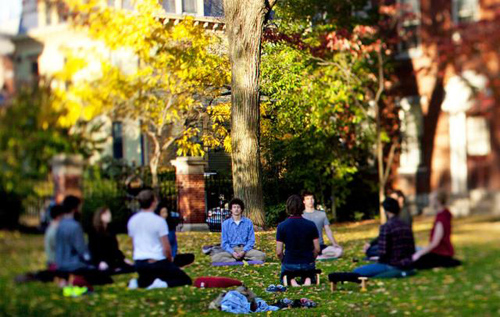 Measuring the difference. Magnetoencephalographic studies show that people who have been trained in mindfulness have quicker and larger changes in alpha wave amplitude when they shift focus. Image credit: Mike Cohea/Brown University

In effect, what the researchers propose in their paper in Frontiers in Human Neuroscience, is that by learning to control their focus on the present somatic moment, mindfulness meditators develop a more sensitive “volume knob” for controlling spatially specific, localized sensory cortical alpha rhythms. Efficient modulation of cortical alpha rhythms in turn enables optimal filtering of sensory information. Meditators learn not only to control what specific body sensations they pay attention to, but also how to regulate attention so that it does not become biased toward negative physical sensations such as chronic pain. The localized attentional control of somatosensory alpha rhythms becomes generalized to better regulate bias toward internally focused negative thoughts, as in depression.

“We think we’re the first group to propose an underlying neurophysiological mechanism that directly links the actual practice of mindful awareness of breath and body sensations to the kinds of cognitive and emotional benefits that mindfulness confers,” said lead author Catherine Kerr, assistant professor (research) of family medicine at the Alpert Medical School and director of translational neuroscience for the Contemplative Studies Initiative at Brown.

In experiments that Kerr and neuroscientist co-authors Stephanie Jones and Christopher Moore have published over the last few years, the team has used a brain imaging technology called magnetoencephalography (MEG) to show that alpha rhythms in the cortex correlate with sensory attention and that the ability to regulate localized alpha brainwaves on a millisecond scale is more distinct in people who have had standardized mindfulness training than in those who have not. The trio led these experiments at the Massachusetts Institute of Technology, Harvard, and Massachusettes General Hospital before they all came to Brown in 2011.

In one experiment published in the Journal of Neuroscience in 2010, they observed that when people focused their attention on sensations in the left hand, the corresponding “map” for the hand in the cortex showed a marked drop in alpha wave amplitude (as if to reduce filtering there). When the subjects’ attention shifted away from that body part, the alpha rhythm amplitude in the corresponding brain map went back up (as if restoring the alpha filter). Other research groups have shown this to be the case for other kinds of attention-related tasks including focusing spatial attention and working memory.

Then in 2011 in Brain Research Bulletin, the team published another paper. They randomized subjects to eight weeks of mindfulness training versus a control group. In MEG, they asked members of each group to focus attention on sensations in their hand and then to switch their attention to their foot. The people trained in mindfulness displayed quicker and larger changes in alpha wave amplitude in their brain’s hand map when they made the attentional shift than the six people who did not have mindfulness training.

In addition to the emerging experimental evidence, the research framework is also informed by a computer model that Jones has developed to simulate the alpha brainwaves through reciprocal interactions between the cortex, which processes information and thoughts, and the thalamus, which is like a switchboard that mediates information flow from the rest of the brain to the cortex. The model is well validated in that it produces alpha rhythms that closely match those observed in live MEG scans of real subjects.

Jones, assistant professor (research) of neuroscience, did not originally develop the model to aid meditation research.

“We were investigating what are the brain mechanisms that can create this prominent alpha rhythm and mediate its impact on sensory processing,” Jones said. “The model simulates the electrical activity of neural networks and makes very specific predictions about how this rhythm is generated. Once we understand the brain processes regulating alpha rhythm expression, we can better understand how it can be modulated with mindfulness practice and why this is beneficial.”

Among the most important predictions is one that could explain how gaining control of alpha rhythms not only enhances sensory focus on a particular area of the body, but also helps people overcome persistent competing stimuli, such as depressive thoughts or chronic pain signals.

To accomplish this, the model predicts, meditators must achieve proper control over the relative timing and strength of alpha rhythms generated from two separate regions of the thalamus, called thalamic nuclei, that talk to different parts of the cortex. One alpha generator would govern the local “tuning in,” for instance of sensations in a hand, while the other would govern the broader “tuning out” of other sensory or cognitive information in the cortex.

It’s a bit like focusing a telescope by precisely aligning the position of two different lenses. The authors’ framework hypothesizes that experienced meditators gain the ability to turn that proverbial focus knob to align those different rhythms.

Working with the framework

In the new paper the authors propose that training chronic pain patients in the standardized mindfulness techniques of focusing on and then focusing away from pain, should result in MEG-measurable, testable improvements in alpha rhythm control.

“By this process of repeatedly engaging and disengaging alpha dynamics across the body map, according to our alpha theory, subjects are re-learning the process of directly modulating localized alpha rhythms,” they wrote. “We hypothesize that chronic pain patients trained in mindfulness will show increased ability to modulate alpha in an anticipatory tactile attention paradigm similar to that used in [the 2011 study].”

Many such experiments are yet to be done, Kerr acknowledges, and her group can only do so many.

“There are a number of hypotheses in this framework that can be tested,” Kerr said. “That’s one of the reasons we wanted to put this out as a framework. It is beyond our ability to test all of these ideas. We wanted to make this available to the scientific field and present this unified view.”

In addition to Kerr, Jones, and Moore, the paper’s other authors are Matthew Sacchet of Stanford University and Sara Lazar of Massachusetts General Hospital.

The team’s research has received support from the National Institutes of Health, the Hershey Family Foundation, and the Osher Institute.