TORONTO, ON – It is time to put the nature versus nurture debate to rest and embrace growing evidence that it is the interaction between biology and environment in early life that influences human development, according to a series of studies recently published in a special edition of the Proceedings of the National Academy of Sciences (PNAS).

“Biologists used to think that our differences are pre-programmed in our genes, while psychologists argued that babies are born with a blank slate and their experience writes on it to shape them into the adults they become. Instead, the important question to be asking is, ‘How is our experience in early life getting embedded in our biology?’” says University of Toronto behavioural geneticist Marla Sokolowski. She is co-editor of the PNAS special edition titled “Biological Embedding of Early Social Adversity: From Fruit Flies to Kindergarteners” along with professors Tom Boyce (University of British Columbia) and Gene Robinson (University of Illinois).

Sokolowski, who is a University Professor in the Department of Ecology & Evolutionary Biology (EEB), the inaugural academic director of U of T’s Fraser Mustard Institute for Human Development and co-director of the Experience-based Brain and Biological Development Program (EBBD) at the Canadian Institute for Advanced Research (CIFAR) says that relatively little is known about the gene-environment interplay that underlies the impact of early life adversity on adult health and behaviour. 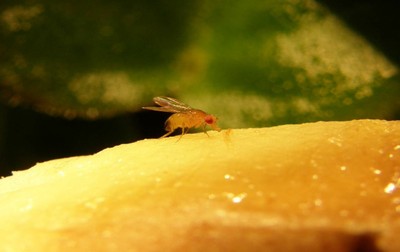 A fruit fly feeding. A genetic study by evolutionary biologists at the University of Toronto using fruit flies (Drosophila melanogaster) showed that chronic food deprivation and lack of adequate nutrition in early life had significant impact on adult behaviour and quality of life. Image credit: Chris Reaume/University of Toronto

In one of the studies in the series, Sokolowski and her colleagues found that chronic food deprivation and lack of adequate nutrition in the early life of the fruit fly Drosophila melanogaster had significant impact on adult behaviour and quality of life. Fruit flies are especially useful for genetic studies because they share a surprising number of qualities with humans, are inexpensive to care for and reproduce rapidly, allowing for several generations to be studied in just a few months.

The researchers examined two types of fruit flies with variants in the foraging gene (for) known as rovers and sitters because of their different behaviours in the presence of food.

When well fed as larvae, rover adults exhibit darting exploration into open areas as they move about in search of food, while sitters show little of this behaviour. When nutritionally deprived as larvae, both rover and sitter adults exhibit darting exploration. Further, the sitters that faced nutritional adversity in early life displayed a reduction in their ability to reproduce. Rovers exhibited no effect on their reproductive fitness.

“The foraging gene makes an enzyme called PKG, which is found in the fly as well as in most other organisms, including humans. When faced with a nutritionally adverse environment while growing up, the levels of the enzyme dropped in flies,” says Sokolowski. “This told us that the foraging gene listens to its environment.” Transgenic manipulations of PKG levels altered darting exploration in well fed but not nutritionally deprived flies.

The research team included James Burns, a CIFAR junior fellow in Sokolowski’s lab, U of T EEB professor Locke Rowe and EEB post-doctoral fellow Nicolas Svetec, as well as colleagues from the University of British Columbia and the Université Paris-Sud. The findings are reported in the paper “Chronic food deprivation in early life affects adult exploratory and fitness traits” in the October 16, 2012 issue of the Proceedings of the National Academy of Science.

The papers in the volume are authored largely by CIFAR researchers, and comprise a multidisciplinary collection of research into fields from molecular genetics, evolutionary biology and neuroscience, to social and behavioural science, epidemiology and social policy – as well as the emerging field of epigenetics, which investigates deviations in a gene’s ability to produce its products (e.g. RNA, protein) caused by mechanisms other than changes in an organism’s underlying DNA sequence.

The collection of papers in the volume sets out an emerging new field of the developmental science of childhood adversity, and changes conventional understanding of the early years of human life.

“This is the first volume of collected research to provide a substantial and comprehensive picture of the interaction between experience and biology in the early years,” says Sokolowski.

“Developmental neuroscience is extraordinarily intricate and complex, and so by approaching this question from multiple angles we’re able to reveal a convergence on a number of themes and set a clearer direction for future research.”