The super-massive black hole at the center of the Milky Way Galaxy has a healthy appetite, frequently snacking on asteroids and comets. Now, a cloud of gas and dust called G2 is on a dangerous course to become its next meal.

Even though Sagittarius A* (pronounced “Sagittarius A-star”) hasn’t been easy to see through the cosmic dust, sitting 25,000 light years away at galaxy central, scientists know it is a black hole — and a hungry one at that. Its weight has been estimated to be more than that of 4 million suns.

“It’s so massive because it’s been eating stars for 10 billion years,” said Mark Morris, professor of physics and astronomy at UCLA.

Morris captivated an audience of nearly 500 as the guest speaker at the Harcourt C. (Ace) Vernon Memorial Lecture, held Oct. 25 at the University of Delaware’s Clayton Hall Conference Center. Sponsored by the University’s Delaware Asteroseismic Research Center and Mount Cuba Astronomical Observatory, the lecture honors one of the observatory’s founders and first board chairman. 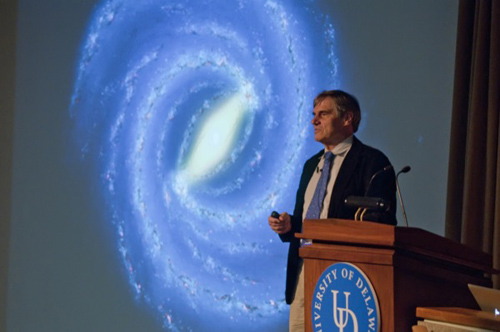 Introduced by Harry Shipman, UD’s Annie Jump Cannon Professor of Astronomy, as “one of the leading lights” on black holes, Morris shared how he and his colleagues have been unmasking the “slumbering giant” in the hard-to-see region at the heart of the galaxy with the aid of sophisticated infrared, microwave and X-ray telescopes and adaptive optics that correct for the spatial fluctuations caused by our turbulent atmosphere like noise-canceling headphones.

Morris displayed images of dark gray dust clouds with occasional pink spots where stars are forming. He showed the cluster of stars in the central bulge of the disk-shaped, spiraling Milky Way. He presented an artist’s fantasy illustration of Sagittarius A* (abbreviated by astronomers as Sgr A*), the black center of a giant pinwheel with arms of stars and gas and dust.

“For every star we can see from Earth, there are a million viewed from the center of the galaxy,” Morris said.

Actually, most galaxies have black holes at the center, and ours is of the “garden variety,” according to Morris. But that does not make it any less fascinating.

“Light cannot leave a black hole. If you get inside its radius, you are doomed. You need to be moving at the speed of light to get out of there,” he says. 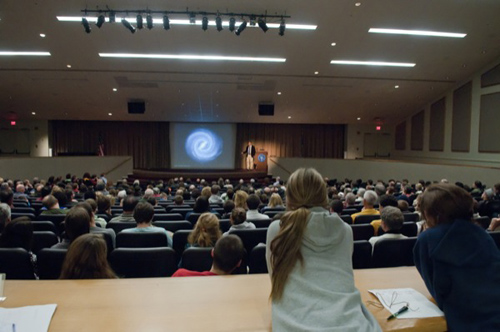 Nearly 500 turned out for the lecture at UD's Clayton Hall. Photo by Doug Baker

Morris says his team knows that Sgr A* is a black hole based on several important pieces of evidence. For one thing, nearby stars are orbiting it at outrageous speeds, succumbing to its gravitational pull. One star, So-16, has been clocked at 12,000 kilometers a second.

“That’s like going from Delaware to Australia in a second, which is significant for a massive star. These stars are really hauling,” he notes.

The researchers also see things falling into the black hole — streams of gas that go faster, get hotter and emit more radiation. Materials accrete on the black hole, and it shines.

As the researchers watch the black hole during the night from the Keck Observatory, its emissions flare up and down. “It puts on a continuous light show,” Morris says.

The black hole typically is a weak source of X-rays. “But about once a day, it goes kablooey and X-ray flares tell us that material is falling in,” he says. An asteroid or comet accounts for these mini-explosions or “burps.”

Mysteries remain to be solved. Although it is hard for a cloud of gas to overcome the tidal forces of a black hole, the young “S-stars” near Sgr A* have shown up in the last 100 million years, fairly recent in astronomical time. How did they get there? 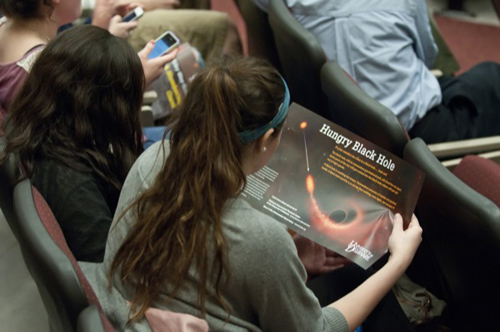 A student checks out the poster before the lecture starts. Photo by Doug Baker

To illustrate one theory, Morris showed a YouTube clip of a black hole’s tremendous tidal force splitting apart a binary system, or “double star” into two stars, one an S-star.

Morris says that energetic X-ray data show that something explosive happened at galaxy central about 4 million years ago, and even more recently, 100 to 200 years ago.

Now, he and his colleagues are poised for another explosion — “like next year,” he says.

They have predicted that the gas cloud G2, three times the mass of Earth, is on track to become the black hole’s next victim. It will get stretched by the massive force, setting off colossal celestial fireworks.