A genome-wide association study published in the August issue of Nature Medicine has found two tiny genetic variations that can predict which patients with Hodgkin’s lymphoma are most likely to develop radiation-induced second cancers years after treatment. Knowing in advance who is at risk could help physicians tailor treatment to reduce the risks for patients who are most susceptible to long-term damage.

Hodgkin’s lymphoma is one of the most treatable cancers, with more than 90 percent of patients surviving after a combination of radiation and chemotherapy. But nearly 20 percent of patients treated as children develop a second cancer within 30 years. The younger the patients are when treated and the higher the radiation dose, the greater the risk. This late side effect of treatment is the second leading cause of death for long-term Hodgkin’s survivors.

“This finding means we can better identify children who are most susceptible to radiation-induced cancers before treatment begins and modify their care to prevent this serious long-term complication,” said Kenan Onel, associate professor of pediatrics and senior author of the study. “Luckily our options for Hodgkin’s are broad enough that we can find ways to control the initial disease without relying on radiation therapy.” 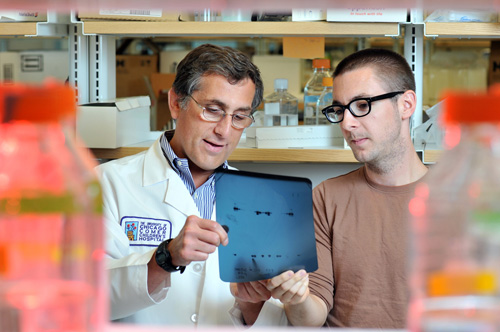 “This is also a triumph for genome-wide association studies,” he added. “Many previous GWAS studies found multiple genetic differences, with each of them playing only a modest role, with minimal impact on clinical management. In this study, which focused on the interaction between genes and a very specific environmental factor—cancer long after radiation therapy—a small number of genetic differences produced a very big impact.”

Onel and colleagues analyzed the genomes of 178 Hodgkin’s patients who had been treated between the ages of 8 and 20 with chemotherapy and radiation therapy. Within 30 years after treatment, 96 of them had developed second cancers and 82 had not.

When they scanned each patient’s genome, focusing on 665,313 tiny genetic variations known as single nucleotide polymorphisms, they found three variations that appeared far more often in patients with second cancers. When they repeated the study using a different set of patients—62 cases with second cancers and 71 without—two of the three markers were significant.

Those two markers were both from a small region known as 21q on chromosome 6. Both are positioned near a gene known as PRDM1.

The genetic variations closely associated with increased cancer risk, and with each other, appeared to decrease activation of the PRMD1 gene. They had no detectable effect any other genes. Cells with the protective version of both markers expressed PRDM1 after being exposed to radiation. Cells with the variants linked to subsequent cancers did not produce any PRDM1.

Previous studies have found that PRDM1 is involved in a variety of fundamental cellular processes, including proliferation, differentiation and apoptosis—which can all go awry in cancer. The gene’s activity is lost in many cancer types.

“Taken together,” the authors note, “our findings support a novel role for PRDM1 as a radiation-responsive tumor suppressor.” PRMD1 may be important for understanding the causes of second cancers in survivors of pediatric Hodgkin’s lymphoma as well as in other cancer patients treated with radiation therapy.”

This study should also “bring some optimism” back to genome-wide association studies, Onel added. Most previous cancer-related markers found through GWAS have been “of little clinical value for predicting risk, response to therapy or survival.” But by incorporating environmental exposure, such as radiation therapy, into genomic investigations, “much of the missing heritability can be revealed,” he said. “By folding in the environmental component, we were able to ask a more targeted question. This approach could improve our ability to integrate genomics into routine cancer care.”