Armonk, NY, USA – 27 Jul 2011: The IBM Selectric typewriter turns 50 on July 31, commemorating a design icon that revolutionized the day-to-day lives of office workers around the world. The Selectric’s half-century birthday coincides with IBM’s Centennial year and the release of a new U.S. postage stamp honoring the Selectric as an icon of design.

The IBM Selectric became an instant sensation upon its debut on July 31, 1961, and remained the typewriter found on most office desks until the brand was retired 25 years later, in 1986. With 2,800 parts, many designed from scratch, it was a major undertaking even for IBM, which had been in the typewriter business since the 1930s and was already a market leader.  The Selectric marked a radical change from previous typewriter designs, and it took IBM seven years to work out the manufacturing and design challenges before it went on sale. 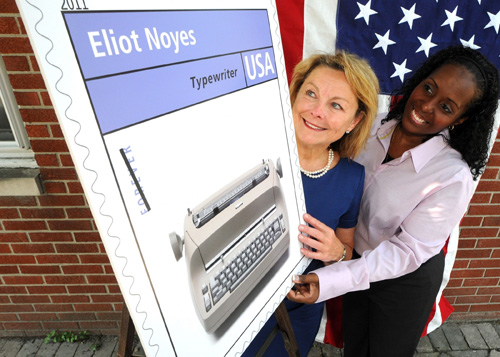 Linda Sanford, Senior Vice President at IBM, left, and Kathya Dunn-Moodie, Officer-in-Charge of the U.S. Post Office in Armonk, N.Y., where IBM is headquartered, celebrate the 50th birthday of the IBM Selectric typewriter. The typewriter's 50th birthday coincides with IBM's Centennial and the release of a new postage stamp honoring the Selectric as an icon of design. IBMs Sanford worked as a development engineer on the Selectric, which revolutionized the day-to-day lives of office workers and turns 50 on July 31, 2011. Image credit: IBM

The Selectric typewriter was a game-changer in many ways:

The Selectric also formed the basis for early computer terminals and paved the way for keyboards to emerge as the primary way for people to interact with computers, as opposed to pressing buttons or levers.  A modified Selectric could be plugged into IBM’s System/360 computer, enabling engineers and researchers to interact with their computers in new ways.

“The Selectric typewriter, from its design to its functionality, was an innovation leader for its time and revolutionized the way people recorded information,” said Linda Sanford, Senior Vice President, Enterprise Transformation, IBM, who was a development engineer on the Selectric. “Nearly two decades before computers were introduced, the Selectric laid the foundation for word-processing applications that boosted efficiency and productivity, and it inspired many user-friendly features in computers that we take for granted today.”

The Selectric’s elegant, curvaceous form was a hallmark of IBM’s industrial design and product innovation. It was created by Eliot Noyes, the famed architect and industrial designer who served as IBM’s consulting designer for 21 years.  The Selectric is featured in the new “Pioneers of American Industrial Design” stamp series from the U.S. Postal Service, which cites Noyes as among 12 important industrial designers who helped shape the look of everyday American life in the 20th century. The stamp displays Noyes’ name and an image of the typewriter.

A Bellwether of Corporate Design

Design has long been a tenet of corporate culture at IBM, whose Chairman Thomas J. Watson, Jr. declared that “good design is good business.”  Watson hired Noyes in 1956 as a design consultant, and together they created the first corporate design program that would shape thinking around corporate design and culture for decades to come.  The program encompassed IBM’s products, buildings, logo and marketing material.  Noyes brought in a wide variety of artists, designers and architects – including Paul Rand, Charles and Ray Eames, Eero Saarinen and Isamu Noguchi – who created many lasting icons of corporate design, from the T.J. Watson Research Center in Yorktown Heights, N.Y., to IBM’s instantly-recognizable eight-bar logo.

“IBM has always believed that corporate design has to be purposeful,” said Lee Green, vice president of Brand Experience and Strategic Design at IBM.  “Design is not about cosmetics and decoration.  It’s about reflecting all aspects of our brand, from the solutions we provide to clients, to the corporate culture and values that permeate our organization.”