EAST LANSING, Mich. — Besides helping each other plant and harvest, rural Chinese neighbors also influence each other’s environmental behavior – farmers are more likely to reenroll their land in a conservation program if they talk to their neighbors about it.

Scientists from Michigan State University’s Center for Systems Integration and Sustainability used a simulation model to study the amount of land farmers in the Wolong Nature Reserve in southwestern China re-enrolled in the Grain-to-Green Program, which aims to reduce soil erosion by converting sloping cropland to forest or grassland. Farmers receive an annual payment of either 5,000 pounds of grain or $498 for each 2.5 acres enrolled in the program. In 2005, this was about 8 percent of the farmers’ income.

“To achieve global environmental sustainability, it is important to go beyond traditional economic and regulatory approaches,” said Jianguo “Jack” Liu, center director and a co-author on the paper. Liu holds the Rachel Carson Chair in Sustainability at MSU. 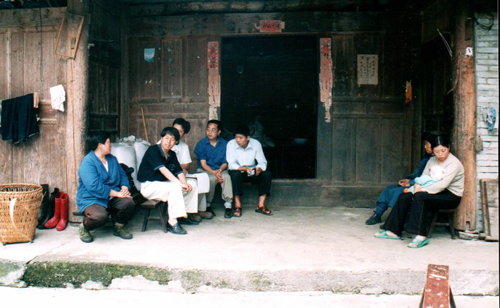 Farmers are more likely to be green if they talk to their neighbors. Image credit: MSU.

Xiaodong Chen, who conducted the research while working on his doctorate at MSU, and colleagues found that if farmers had the opportunity to interact with each other, they were willing to reenroll their land in the GTGP. And the more times they interacted, the more land was reenrolled.

The study is published online in the journal Ecological Modeling.

“When people talked to each other, they learned of the others’ decisions and were more likely to reenroll their land at the same payment,” said Chen, now assistant professor of geography at the University of North Carolina-Chapel Hill. “More than 15 percent more land was reenrolled when people had 10 interactions with their neighbors. With three interactions, 7.5 percent more land was reenrolled. The study shows that if people interact, it improves the efficiency of the program and is good for the environment.”

The research builds on earlier findings by Liu and Chen showing that employed people in larger Chinese cities were more likely to adopt environmental behaviors, such as separating recyclables from trash, recycling plastic bags or participating in environmental education programs.

“The GTGP takes advantage of the general trend of rural-to-urban migration in China,” Chen added. “People want to work off-farm, but they don’t want to give up their land. Grain-to-Green allows them to do that and still get some income from the land. We found that if they talked to their neighbors, most people would actually leave the land in the program even if the payments stopped.”

In addition to Liu and Chen, other study authors are Frank Lupi, MSU professor of environmental and natural resources economics and fisheries and wildlife; Andrés Viña, MSU research specialist; and researchers from San Diego State University and Harvard University.

The research was funded by the National Science Foundation, NASA, the National Institutes of Health, the MSU Environmental Research Initiative, MSU AgBioResearch, and the Giorgio Ruffolo Fellowship in Sustainability Science at Harvard University.