New Details on the Molecular Machinery of Cancer

Researchers with Lawrence Berkeley National Laboratory (Berkeley Lab) and the University of California (UC) Berkeley have provided important new details into the activation of the epidermal growth factor receptor (EGFR), a cell surface protein that has been strongly linked to a large number of cancers and is a major target of cancer therapies.

“The more we understand about EGFR and the complex molecular machinery involved in the growth and proliferation of cells, the closer we will be to developing new and more effective ways to cure and treat the many different forms of cancer,” says chemist Jay Groves, one of the leaders of this research. “Through a tour-de-force of quantitative biology techniques that included cutting edge time-resolved fluorescence spectroscopy in living cells, Nuclear Magnetic Resonance, and computational modeling, we’ve determined definitively how EGFR becomes activated through to its epidermal growth factor (EGF) ligand.”

Groves, who holds joint appointments with Berkeley Lab’s Physical Biosciences Division and UC Berkeley’s Chemistry Department, and is also a Howard Hughes Medical Institute (HHMI) investigator is one of two corresponding authors of a paper in the journal Cell that describes this research. The paper is titled “Conformational Coupling across the Plasma Membrane in Activation of the EGF Receptor.” The other corresponding author is John Kuriyan, who also holds joint appointments with Berkeley Lab, UC Berkeley and HHMI.

In high school biology classes we learn that genes contain coded instructions that are translated into the assembly of specific proteins. Many proteins, however, must be activated by post-translational processes such as autophosphorylation, the addition of phosphate. Protein activation can impact many important cellular processes including proliferation, differentiation and migration. Cancer is essentially a case of these cellular functions gone wild, often the result of problems with the EGFR. However, despite its well-established links to cancer, EGFR activation has only been partially understood.

Groves says while the picture is accurate, it is an oversimplification of the mechanics behind the process because isolated intracellular kinase domains in solution can be active on their own at relatively low concentration without EGF ligand-induced dimerization. Dimerization is the combining of two identical molecules into a single compound molecule. 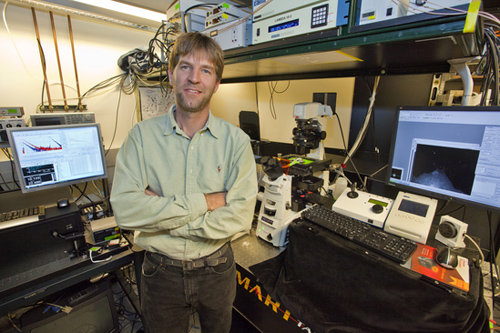 Jay Groves is a chemist who holds appointments with Berkeley Lab, UC Berkeley and HHMI. (Photo by Roy Kaltschmidt)

Measuring autophosphorylation as a function of EGFR surface density in cells, Groves, Kuriyan and their colleagues found that structural coupling between the EGFR transmembrane helix and extracellular juxtamembrane modules in addition to EGF ligand-engagement is required for EGFR activation. This structural coupling permits dimerization to take place in the presence of the EGF ligand.

“The un-ligated EGFR sits in a structural configuration that prevents the intracellular kinase domains from being able to reach each other,” Groves says. “When the EGF ligand binds, this restraint is removed, dimerization occurs, and one kinase phosphorylates the other.” 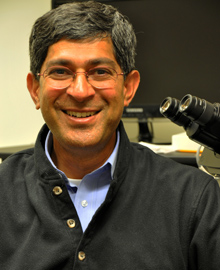 John Kuriyan is a chemist who holds appointments with Berkeley Lab, UC Berkeley and HHMI. (Photo by Rahul Das)

The inclusion by Groves and his colleagues of time-resolved fluorescence spectroscopy on living cells is another new advance in bringing a quantitative approach to the biological sciences. By combining picosecond light pulses from two different colors of lasers into a single beam, then genetically modifying EGFRs to carry either a red or green fluorescent protein, the researchers were able to monitor in real time how EGFRs move and assemble into dimers during activation by the EGF ligands.

“Focusing on the cell membrane and monitoring each fluorescent photon emitted, then determining both its color and precise time of arrival at the detector, allows unambiguous assignment of which photon was triggered by which color light pulse,” Groves says. “All of this can be done in real time and in living cells.”

With the mechanics behind the activation of EGFR now fully explained, Groves and his colleagues are now applying their quantitative biology techniques to another group of receptor tyrosine kinases, the Eph receptors, as well as T cell receptors that are so important to the immune system.

“Our broader goal with these quantitative biology techniques is to transform biology into a hard physical science,” Groves says. “The idea is to move from simply describing a collage of observations to being able to understand how biological systems work based on fundamental physics.”

This research was primarily support by a grant from the National Cancer Institute.