Former U.S. Secretary of State Madeleine Albright told an audience at the University of Chicago that her worldview was shaped early in life, when she witnessed the impact the United States had during and immediately following World War II.

“I learned at a very young age that American involvement and engagement was absolutely essential, so that things turned out in a decent way,” said Albright, who immigrated to the United States with her diplomat family at age 11. 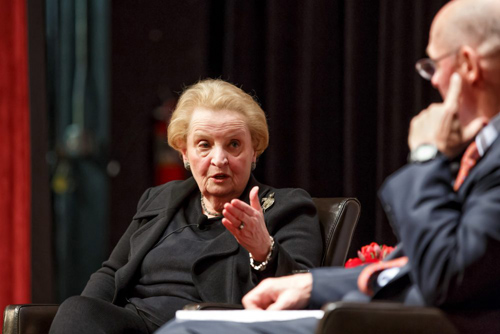 Former U.S. Secretary of State Madeleine Albright was on campus on Feb. 7 for a wide-ranging discussion with Henry M. Paulson Jr. about international affairs and her path-breaking career. Photo by Jason Smith

Albright was on campus Feb. 7 for a wide-ranging discussion with Henry M. Paulson Jr. about international affairs and her path-breaking career. She currently serves as chair of Albright Stonebridge Group, a global strategy firm, and of Albright Capital Management, an investment advisory firm.

Paulson, a distinguished senior fellow at the Harris School of Public Policy and former U.S. Treasury secretary, hosted the event. Albright was invited to campus as part of an ongoing speaker series organized by the Paulson Institute, an independent entity located at the University of Chicago that works to address pressing economic and environmental challenges facing the United States and China. Prior guests have included former World Bank president Robert B. Zoellick and former ambassador to China Jon Huntsman.

Calling the U.S. “indispensible” in world affairs, Albright told the audience that America needs to resist its natural instinct to isolate itself during difficult times. However, while she said the nation’s security depends on the United States playing an active international role, she clarified that it did not mean the U.S. should act unilaterally.

“There is nothing about the word ‘indispensible’ [that means] ‘alone,’” said Albright, who was awarded the Presidential Medal of Freedom by President Barack Obama in 2012. “It just means to be engaged. I believe that it is important to have partners. Americans don’t like the word ‘multilateralism’—it has too many syllables and ends in an ‘ism.’ But the bottom line is it is a matter of burden sharing, partnership and working with others.”

Over the course of the 90-minute event, Albright spoke about important foreign policy issues, past and present. She talked about the U.S. intervention in the conflict in Bosnia in 1999, calling the decision tough but correct, despite the accidental bombing of the Chinese embassy that occurred. Albright expressed her view that intervening in Iraq was a strategic mistake that hurt America’s image and took its focus off the war in Afghanistan. When asked by a student if the United States should be doing more in Syria, Albright talked about what she called the “do-ability doctrine”—weighing the most effective options for a specific crisis, from sending troops or imposing a no-fly zone to offering non-lethal assistance or giving humanitarian aid.

“One of the hardest parts of being a decision-maker is trying to figure out where you can make a difference,” said Albright. 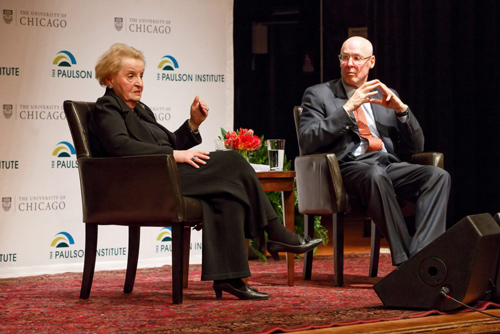 “One of the hardest parts of being a decision-maker is trying to figure out where you can make a difference,” said Madeleine Albright in response to a student question about whether the United States could be doing more in Syria. Photo by Jason Smith

When President Bill Clinton appointed Albright as the 64th U.S. secretary of state in 1997, she became the highest ranking woman in U.S. government history. However, since that time, women have led the State Department for 12 of the last 16 years. Much of the discussion between the two former Cabinet secretaries at the event touched on Albright’s pioneering leadership as a female diplomat.

In speaking of her historic appointment, Albright said that while many people expressed concern about how Arab leaders would react to a female secretary of state, her most difficult relationships were with male colleagues in the U.S. government.

“I didn’t have trouble dealing with foreign leaders,” said Albright. “I arrived in a very large plane that said ‘United States of America.’”

However, her male U.S. colleagues, who Albright said had long regarded her more as a mother and a friend to their wives than as a peer, had trouble adjusting to her new position. 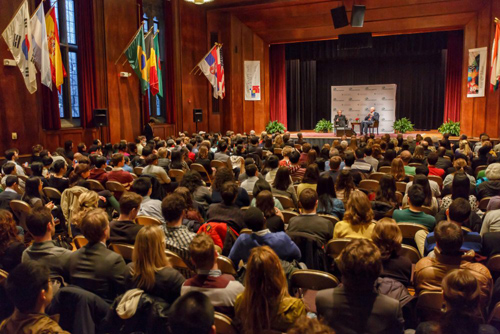 Madeleine Albright and Henry Paulson spoke to a packed audience at International House. Albright, who became the highest ranking woman in U.S. history when President Bill Clinton appointed her as the 64th U.S. secretary of state in 1997, spoke about her experiences as a pioneer for female government leadership. Photo by Jason Smith

When Paulson asked about qualities that differentiate female leaders, Albright pointed to the importance of follow-through, education, strength of character, learning to listen and interrupt, and being able to write briefly and clearly. Plus, there should always be more than one token woman in the room.

“For me, the best decision-making is co-ed decision-making,” said Albright. Jokingly she added, “I do not believe the world would be better off completely run by women, and if anybody thinks that, they have forgotten high school.”