Get off my lawn: Song Sparrows Escalate Territorial Threats

Territorial song sparrows use increasingly threatening signals to ward off trespassing rivals. First an early warning that matches the intruder’s song, then wing waving – a bird’s version of “flipping the bird” – as the dispute heats up, and finally, if all other signals have failed, attack.

This hierarchical warning scheme, discovered by researchers at the University of Washington, adds nuance to a communication system that has been long-used as a model to study how people use and learn language

“This is one of the most complicated communication systems outside of human language,” said lead author Çağlar Akçay, who did the study as a UW graduate student. He is now a postdoctoral researcher at Cornell University.

“Here we find that if a sparrow matches the intruder’s song as the intruder invades his territory, this almost always predicts that he will eventually attack the intruder,” Akçay said. 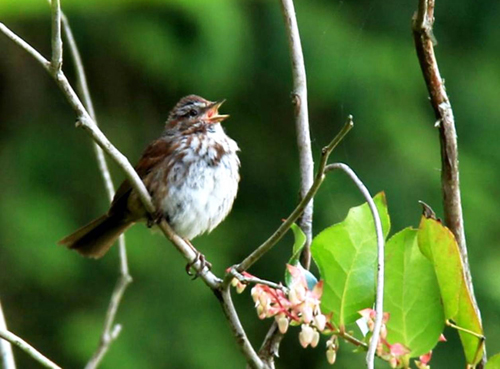 “We succeeded here because we recognized that song-matching is an early warning signal,” said co-author Michael Beecher, a UW professor of psychology. “We designed our experiment to simulate an escalating intrusion by another song sparrow, so that our subject would begin with low-level threat signals before switching to higher-level threat signals.”

The researchers recorded songs from 48 sparrows living in Discovery Park in Seattle. To feign an intruder, they perched a stuffed song sparrow in a bush or tree and played the recorded song.

The song was first played just outside of the sparrow’s territory. Believing the song to come from a hidden aggressor close to their home turf, the provoked bird sang and approached the speaker.

The song was then played from a different speaker placed 20 meters (60 feet) inside his boundary, which simulated movement by the rival into the territory. At the same time, the researchers uncovered the stuffed sparrow just above the speaker, with its beak posed as if it was singing.

It was enough to fool the live birds. Many of the sparrows responded first by matching the intruder’s song. When the simulated intruder moved into the territory and persisted in singing, the defending sparrow progressed to higher-level warnings including soft songs and wing waves.

Soft song is not lullaby-like, but is perceived as menacing by enemies. Wing waving, a vigorous vibrating of one wing at a time, likewise looks harmless enough, but it too is an assertive signal. See wing waving at the 27-second mark of this video:

When the stuffed bird did not react to those higher-level warning signals, the live bird attacked:

“Birds generally do all this signaling,” Akçay said, “because it’s usually beneficial to avoid getting into a fight if it can be avoided. There are less costly ways to persuade an aggressor to back down.”

Most of the sparrows in the study, 31out of 48, eventually attacked. Birds who had song-matched were the mostly likely to attack.

Not all birds showed the same pattern of signaling. A few “bluffers” matched the trespasser’s song without following through with an attack. Some others – labeled “under-signalers” by the researchers – attacked without giving warning signals.

The researchers are studying these behavioral subtypes now, and have collected evidence that these birds, like humans, have personalities that shape their behavior in distinctive ways.

“These kinds of field studies provide context for laboratory research that uses bird song learning as an animal model for exploring the brain mechanisms of learning,” Beecher said. “Using bird song as a model system without understanding its natural social context would be like studying the neural basis of language without any idea of what humans use their language for.”

Other co-authors are Mari Tom, a recent UW graduate, and Elizabeth Campbell, a research technician at the UW. The National Science Foundation funded the study.