The Universe in the Middle of Nowhere

The UA’s Chris Impey has taught cosmology to Tibetan Buddhist monastics in remote parts of India each summer for the past five years. With a grant from the John Templeton Foundation, he detailed his experiences in a book, “Humble Before the Void,” which likely will publish in 2014.

Chris Impey thinks back to the time he spent living on the edge of Tibetan Buddhist monasteries, teaching modern cosmology to Buddhist monastics in India: “On a typical day, they would be up at 5 a.m. and have prayed for a few hours or done meditation before you even see them. And their attention is just as good at the end of a long day as at the beginning.”

In 2008, the University of Arizona Distinguished Professor and deputy head of the department of astronomy first packed his bags for India as part of the Science for Monks program initiated at the Dalai Lama’s bequest. He has returned every year since.

A manuscript of Impey’s book, “Humble Before the Void,” is in reach as he speaks. 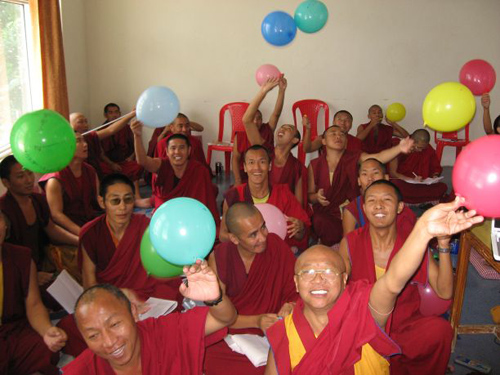 Monks release their “universes” after an experiment to measure Hubble expansion using balloons as analogs for curved space-time. (Photo by: Chris Impey)

The book was written with a grant from the John Templeton Foundation, a philanthropic organization that seeks to support scientific research and efforts to further the dialogue between science and religion. In it, Impey details his experiences at the crossroads of modern science and a major world religion.

“Probably the most important goal of this work is for Americans who are used to the conflict between science and some forms of religion to show that there’s a completely harmonious meeting ground between a major world religion and the cutting edge of modern science,” Impey says.

His Holiness the Dalai Lama, the spiritual leader of the Tibetan people, is perhaps the only leader of a major world religion to whole-heartedly embrace the findings of modern science.

“Buddhist teachings stress the importance of understanding reality. Therefore, we should pay attention to what modern scientists have actually found through experiment and through measurement the things they have proved to be reality,” the Dalai Lama said in 2003.

“The Dalai Lama decided that he wanted his monks to be trained for the modern world where science and technology are important,” Impey says. “And he has said that if something in modern science is found to disagree with Buddhist doctrine then Buddhism will change. It’s very hard to imagine some other religious leaders of other persuasions ever saying that. It’s a very striking starting point.” 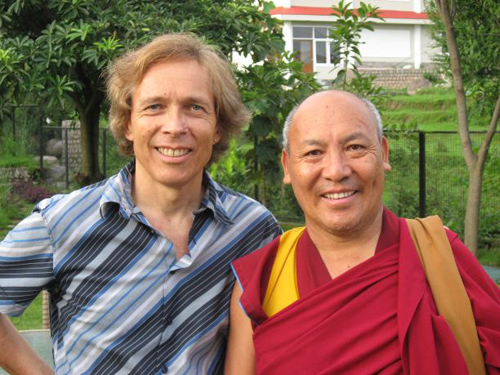 Chris Impey stands with the Venerable Geshe Lhakdor, director of the Library of Tibetan Works, who was for longer than a decade the personal translator for the Dalai Lama. (Photo by: Karma Thupten)

To that end, Western educators in the Science for Monks program routinely give workshops to the Tibetan monastic community in India, on topics ranging from biology and neuroscience to mathematics and quantum physics, emphasizing scientific inquiry.

Exiled from their country, more than 20,000 Tibetans make their home in isolated monasteries in the south of India, or clustered around Dharamsala, the home of the Tibetan government in exile, in the northern part of the country.

Impey has gone to a different place each time he has traveled to India. “Last month I was in the south – it’s actually so remote it almost doesn’t have a name. There’s a tea shop, not much Internet, no hot water.”

“It’s just a monastery almost in the middle of nowhere,” he says. In this isolated setting, the discussion of the universe begins.

It is perhaps surprising to some, Impey says, that “in its core aspects, there is nothing dissonant in modern cosmology with the fundamental Buddhist precepts.”

“I give them a conventional scientific view of the 13.7 billion-year-old universe, with 100 billion galaxies and the Big Bang theory. And they assimilate it, and they clearly find it exciting and interesting. There is no science-religion conflict.” 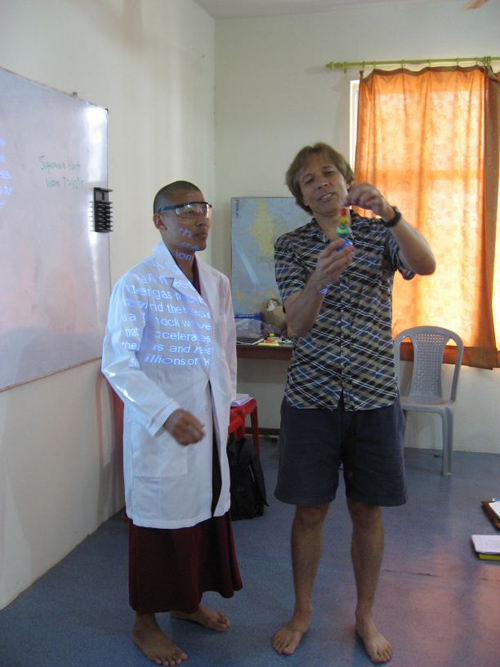 “A tea shop, not much Internet, no hot water.” Chris Impey travels to remote areas of India to teach cosmology to Tibetan Buddhist monastics. Here, Thabke Lodoe and Impey perform an experiment to demonstrate the violent expulsion of material from a star at the end of its life. (Photo by: Karma Thupten)

Buddhism deals with astronomical numbers already, Impey says. “The largest time scales in Buddhism are trillions of years, and the number of world systems is either infinite or billions.”

Buddhist philosophy describes time as cyclic rather than linear in nature, without an origin or a Big Bang-type episode. “But, interestingly,” Impey says, “the Big Bang theory itself is now starting to venture to talk about a precursor state, or multiverses.”

Teaching the monks and nuns was a remarkable experience in itself, Impey says. “It’s not like a classic western archetype of teaching where in 15 minutes you’ve lost half your audience. The monks have fantastic discipline. Their powers of concentration, application, enthusiasm and alertness are so formidable you actually could fall into a bad habit of lecturing too much.”

“They have a willingness to do what in the west would be considered tedious activities in the service of learning,” Impey adds. “We used grains of sand as analogies for the number of stars in the universe or a galaxy. They had graph paper and they had to line up grains of sand in a square centimeter with no magnifying glass.” 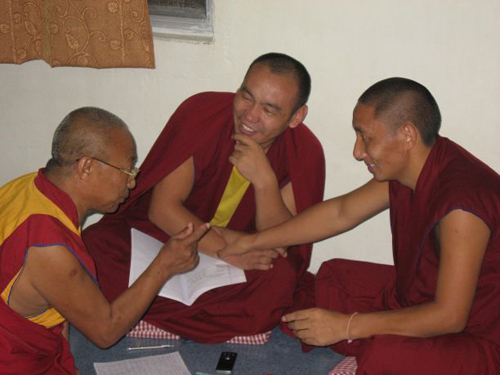 Geshe Yeshi Choephel, Jime Gyatso and Sonam Choephel discuss whether the universe is finite or infinite. (Photo by: Chris Impey)

Once, Impey prepared about 35 sheets of paper with images of events in the universe from the Big Bang to geological happenings on Earth and human history. The monastics worked in groups to organize the images into a timeline, and then were tasked with critiquing each other’s timelines.

“That becomes a very vigorous debate,” Impey says. “When they debate, it’s really quite remarkable. It seems aggressive, but it isn’t, because they’re always smiling and laughing. It’s just the way that they like to argue. They’re hugely engaged.”

To demonstrate the dispersal of the four forces of nature in the early universe, four monks donned Mexican wrestling masks and each acted out the role of one specific force. Representing gravity, one held things together. Another, acting as the strong nuclear force, assembled atomic nuclei out of a modeling toy called Zoob. One monk held a flashlight, representing electromagnetism, and the monk representing the weak nuclear force, or radioactivity, pulled the model atomic nuclei apart.

Tenzin Sonam, a doctoral candidate in astronomy education at the UA, has translated for Impey every year since 2008. “Chris is a great student-centered educator,” Sonam says. “The monks love him.” 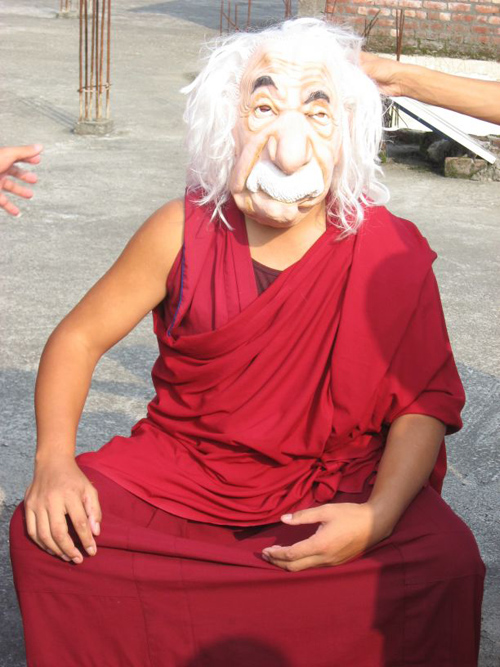 Ngawang Lobsang dons the mask of Einstein after the master of space and time appeared in the classroom to answer questions about relativity. (Photo by: Chris Impey)

For the many Westerners with an interest in Buddhism, Impey says his book discusses a substantial part of Buddhist philosophy as well as modern cosmology, and has a strong educational focus. The book likely will be published in 2014.

Impey found that the discussion between science and religion goes both ways. “That dialogue leads scientists to recognize the limits of their knowledge,” he says. “And to understand that they don’t ascribe meaning to anything but just explain how things work, and that you need to have other traditions, philosophy or religion that will let you address meaning.”