Microbe That Can Handle Ionic Liquids

In the search for technology by which economically competitive biofuels can be produced from cellulosic biomass, the combination of sugar-fermenting microbes and ionic liquid solvents looks to be a winner save for one major problem: the ionic liquids used to make cellulosic biomass more digestible for microbes can also be toxic to them. A solution to this conundrum, however, may be in the offing.

Researchers with the U.S. Department of Energy (DOE)’s Joint BioEnergy Institute (JBEI), a multi-institutional partnership led by Berkeley Lab, have identified a tropical rainforest microbe that can endure relatively high concentrations of an ionic liquid used to dissolve cellulosic biomass. The researchers have also determined how the microbe is able to do this, a discovery that holds broad implications beyond the production of advanced biofuels.

“Our findings represent an important first step in understanding the mechanisms of ionic liquid resistance in bacteria and provide a basis for engineering ionic liquid tolerance into strains of fuel-producing microbes for a more efficient biofuel production process,” says Blake Simmons, a chemical engineer who heads JBEI’s Deconstruction Division and one of the senior investigators for this research.

Adds Michael Thelen, the principal investigator and a member of JBEI’s Deconstruction Division, “Our study also demonstrates that vigorous efforts to discover and analyze the unique properties of microorganisms can provide an important basis for understanding microbial stress and adaptation responses to anthropogenic chemicals used in industry.” 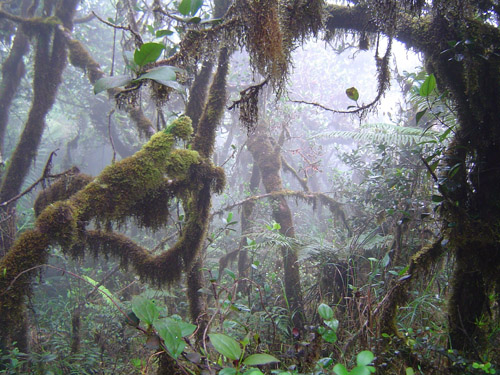 The El Yunque National Forest in Puerto Rico is a tropical rainforest where a strain of the microbe Enterobacter lignolyticus was found that can tolerate an ionic liquid used to dissolve cellulosic biomass for microbial-based biofuel production. (Photo by Kristen DeAngelis)

Thelen is the corresponding author and Simmons a co-author of a paper reporting the results of this research in the Proceedings of the National Academy of Sciences (PNAS). The paper is titled “Global transcriptome response to ionic liquid by a tropical rain forest soil bacterium, Enterobacter lignolyticus.” Other co-authors are Jane Khudyakov, Patrik D’haeseleer, Sharon Borglin, Kristen DeAngelis, Hannah Wooa, Erika Lindquist and Terry Hazen.

The burning of fossil fuels releases nearly 9 billion metric tons of excess carbon into the atmosphere each year. Meanwhile the global demand for gasoline and other petroleum-based fuels continues to rise. Clean, green and renewable fuels that won’t add excess carbon to the atmosphere are sorely needed. Among the best candidates are advanced biofuels synthesized from the cellulosic biomass in non-food plants. Such fuels could displace petroleum-based fuels on a gallon-for-gallon basis and be incorporated into today’s vehicles and infrastructures with no impact on performance. 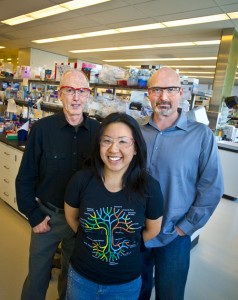 From left, Michael Thelen, Hannah Woo and Blake Simmons of the Joint BioEnergy Institute have determined how a rain forest microbe is able to survive in an ionic liquid used to pre-treat cellulosic biomass for the production of advance biofuels. (Photo by Roy Kaltschmidt, Berkeley Lab)

To this end, researchers at JBEI have already engineered a strain of E. coli bacteria to digest the cellulosic biomass of switchgrass, a perennial grass that thrives on land not suitable for food crops, and convert its sugars into biofuel replacements for gasoline, diesel and jet fuels. A key to this success was the pretreatment of the switchgrass with an ionic liquid to dissolve it.

“Unlike the starch sugars in grains, the complex polysaccharides in cellulosic biomass are semicrystalline and deeply embedded within a tough woody material called lignin,” Simmons says. “Lignin can be removed and cellulose crystallinity can be reduced if the biomass is pretreated with ionic liquids, environmentally benign organic salts often used as green chemistry substitutes for volatile organic solvents.”

Current strategies for processing cellulosic biomass into biofuels involve multiple production steps in which the bulk of ionic liquids used to pretreat biomass can be washed out before the microbes are added. However, to cut production costs, a “one pot” strategy in which processing steps take place in a single vat would be highly desirable. This strategy requires microbes that can tolerate and grow in ionic liquids used to pretreat cellulosic biomass.

In search of such microbes, a team of JBEI researchers led by microbiologist and PNAS paper co-author Kristen DeAngelis ventured into the El Yunque National Forest in Puerto Rico, a tropical rain forest where microbial communities have demonstrated exceptionally high rates of biomass decomposition, and a tolerance to high osmotic pressures of the sort generated by exposure to ionic liquids. They returned with a prime candidate in the SCF1 strain of Enterobacter lignolyticus.

“We first determined that the SCF1 strain of Enterobacter lignolyticus grows in the presence of the ionic liquid [C2mim]Cl at concentrations comparable to the concentrations that remain in the cellulose after pretreatment and recovery,” Thelen says. “Next, through a combination of phenotypic growth assays, phospholipid fatty acid analysis, and RNA sequencing technologies, we investigated the mechanisms by which SCF1 tolerates this ionic liquid.”

Working in collaboration with researchers at DOE’s Joint Genome Institute, another multi-institutional partnership led by Berkeley Lab, Thelen and Simmons and their JBEI colleagues developed a preliminary model of ionic liquid tolerance for SCF1.

“Our model suggests that SCF1 bacteria resist the toxic effect of the [C2mim]Cl ionic liquid by altering the permeability of their cell membrane and pumping the toxic chemical out of the cell before damage occurs,” Thelen says. “These detoxifying mechanisms are known to be involved in bacterial responses to stress, but not in a coordinated manner as we have shown for the response of SCF1 to ionic liquid.”

Thelen says the information gained from this study will be used at JBEI to help engineer new fuel-producing microbes that can tolerate ionic liquid pretreatments. Beyond biofuels, the techniques developed in this study should also be applicable to the screening of microbial responses to other chemical compounds, such as antibiotics. 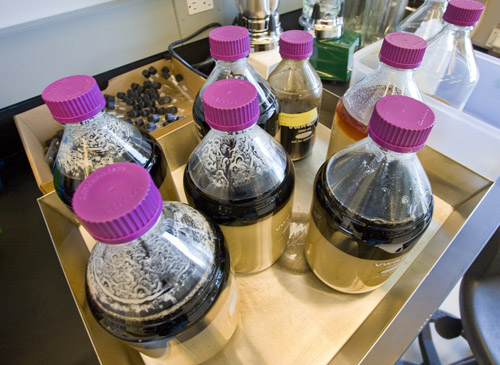 This work was supported by the DOE Office of Science.