Internet Explorer launches the second episode of “The Random Adventures of Brandon Generator,” an interactive animated Web series created by luminaries from the film and comic worlds – with a big assist from the audience.

REDMOND, Wash. – May 17, 2012 – A blocked writer, haunted by the cursor blinking cruelly on his blank laptop screen, blacks out in the midst of an epic espresso binge. He awakes to find prose, sketches and story ideas on his Dictaphone – none of which he can remember creating.

Welcome to The Random Adventures of Brandon Generator, the brainchild of filmmaker Edgar Wright, comic book artist Tommy Lee Edwards, Microsoft’s Internet Explorer team – and you. The audience is being invited to help shape the four-episode series of animated shorts by suggesting characters, plots, nemeses and entire scenes. The site received thousands of submissions after the first episode premiered in mid-April, which ended with a plea to help Brandon overcome his writer’s block. 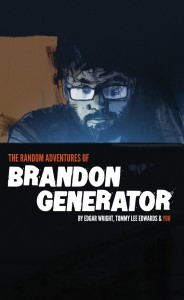 Brandon Is Lost. Can You Help? "The Random Adventures of Brandon Generator" invites the audience to collaborate with filmmaker Edgar Wright and illustrator Tommy Lee Edwards on the ongoing story of Brandon, a caffeine-addled writer. Image credit: Microsoft

Wright, the director of “Shaun of the Dead “and “Hot Fuzz,” describes the HTML5-powered experience as equal parts interactive movie, animated comic, choose your own adventure and “Internet head trip.”

“I think the fact that it’s neither one thing nor the other probably means it’s something entirely new,” he says. “The idea was to give people with different talents, whether you’re an artist or a writer or a want-to-be actor, different ways to contribute. I think those people who have their material used are going to flip out when they see it.”

The second episode of Brandon Generator launches today, and it brings to life the audience collaborations now shaping the story, Wright says. He sifted through every idea submitted to the site, where visitors can leave messages on Brandon’s phone, sketch on his notepad, and leave plot and character ideas on his laptop. He picked the 60 best ideas to continue the saga of Brandon, a “romanticized version” of himself.

Wright believes the 5-7 minute episodes are the perfect length for in the animated series – both for the audience and the overloaded animators, who worked frantically to add the audience’s ideas to Episode 2.

Wright says he enjoyed dabbling with the new forms of storytelling the Internet offers. “I think technology allows you to be a part of an ongoing piece of art or narrative, and that’s cool,” he says. “There’s definitely a hunger for a faster delivery system. I think film has to catch up to the fact that the Internet has become a leveler worldwide, which is an amazing thing – someone can post a picture, a short film or a piece of writing on the Internet and it can go viral overnight.”

More than 3,000 people have contributed drawings, prose and voicemails to the Brandon Generator site, which is a perfect showcase for HTML5 and the rich and immersive new Web experiences that can be delivered with a modern browser like IE9, says Gabby Hegerty, Internet Explorer Lead UK. It joins other Internet Explorer experiences including the Hunger Games’ Capitol Tour, Cut the Rope, and Jasmin V’s Just a Friend that have been designed to push the Web forward by demonstrating the power of HTML5, take advantage of the full power of the PC with hardware acceleration and showcase what’s possible. 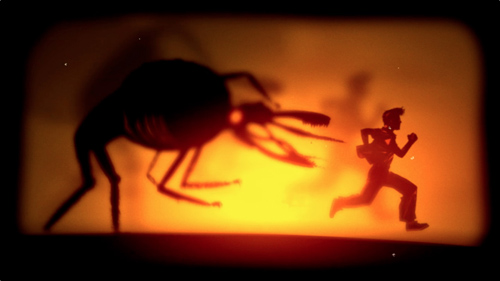 Fans Supply Monsters and More. Visitors to the Brandon Generator site can leave messages on Brandon’s phone, submit plot ideas on his laptop, and sketch monsters on his notepad. Episode 2 weaves in 60 ideas submitted by the audience. Image credit: Microsoft

“We couldn’t have hoped for a better reaction from people who have watched the first episode of Brandon Generator through IE9,” Hegerty says. “I encourage everyone to experience for themselves just how beautiful the Web can be by checking out Episode 2 of Brandon Generator.”

Many journalists and industry watchers agree. T3 said Brandon Generator “pushes HTML5 boundaries,” while The Next Web called the site “a beautiful combination of sights and sounds” that “boosts interactive storytelling for IE9 users.” And Pocket Lint dubbed the site “extraordinary.”

Collaborating with an Audience

Wright, a huge comic book fan, says he was initially drawn to the project because of Edwards’ involvement. But he was also excited by the idea of interacting and collaborating with an online audience. 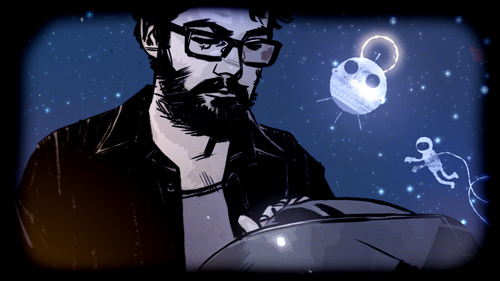 Site Comes Alive With HTML5. The HTML5-powered site aims to highlight the rich and immersive new Web experiences that can be delivered with a modern browser like Internet Explorer 9. Image credit: Microsoft

“Over the years I’ve interacted with fans on Twitter, Facebook and my blog,” Wright says. “But usually I’m just answering questions. This was a chance to go further and work with creative people on the Internet. Brandon is essentially a fictitious version of me, and I’m asking people to help the character, but essentially they’re collaborating with me and Tommy and Julian.”

(“Julian” is Julian Barratt, one half of British comedy troupe The Mighty Boosh and the actor who narrates each episode of Brandon Generator.)

On a recent screenwriting project, Wright found himself distracted by having “the world’s greatest newsstand at your fingertips.” He wasn’t as paralyzed as Brandon, but he did find the Web’s siren song tempting. And he knows he’s not alone. 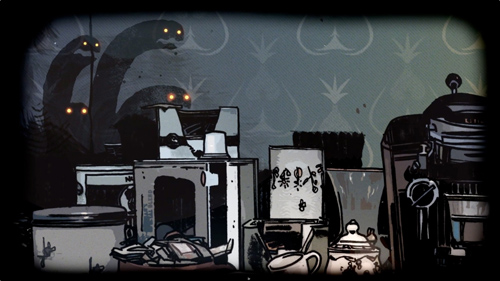 Coffee Monsters. Director Edgar Wright calls Brandon "a romanticized version" of himself. They share a caffeine addiction – both have put down 13 espressos in a single day. Image credit: Microsoft

“Brandon’s problems stem from procrastination, and I think that’s something that everybody who works on a computer understands,” he says. “Especially if you’re trying to do something creative and you’re just staring at your laptop, it’s both a blessing and a curse to have that technology at your fingertips.”

Wright shares something else in common with Brandon: a severe espresso addiction. He admits there must have been a day when he drank 13 espressos like Brandon. He would not recommend it to anyone. In the wake of Brandon Generator, Wright has received a number of emails telling him that the story perfectly captures their daily routine. “I think I’m speaking to an unsung group of people who need help: caffeine addicts. Myself included.”

Wright says he hopes the audience continues to submit their ideas after viewing the second episode, which also ends with a cliffhanger and a plea for help. The story arc for Brandon has already been mapped out, Wright says. But it’s up to the audience to fill in the gaps before the final episode, which will post in June. “I have an idea about where Brandon is going, but I have no idea how he’s going to get there.” 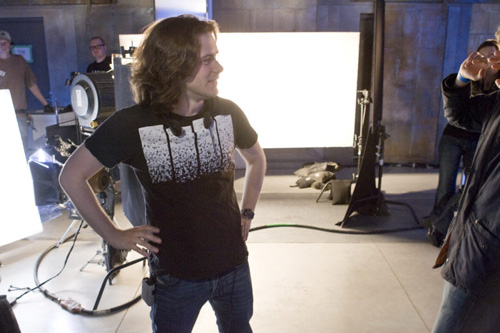 On the Set With Director Edgar Wright. Edgar Wright, the director of "Shaun of the Dead" and "Hot Fuzz,” describes Brandon Generator as equal parts interactive movie, animated comic, choose your own adventure, and "Internet head trip." Image credit: Microsoft