Poor Phineas Gage. In 1848, the supervisor for the Rutland and Burlington Railroad in Vermont was using a 13-pound, 3-foot-7-inch rod to pack blasting powder into a rock when he triggered an explosion that drove the rod through his left cheek and out of the top of his head. As reported at the time, the rod was later found, “smeared with blood and brains.”

Miraculously, Gage lived, becoming the most famous case in the history of neuroscience — not only because he survived a horrific accident that led to the destruction of much of his left frontal lobe but also because of the injury’s reported effects on his personality and behavior, which were said to be profound. Gage went from being an affable 25-year-old to one that was fitful, irreverent and profane. His friends and acquaintances said he was “no longer Gage.” 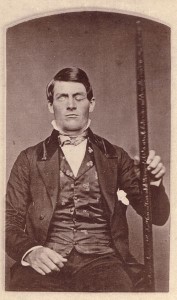 Phineas Gage holding the iron rod that was blasted through his skull. Image source: Wikipedia

Over the years, various scientists have studied and argued about the exact location and degree of damage to Gage’s cerebral cortex and the impact it had on his personality. Now, for the first time, researchers at UCLA, using brain-imaging data that was lost to science for a decade, have broadened the examination of Gage to look at the damage to the white matter “pathways” that connect various regions of the brain.

Reporting in the May 16 issue of the journal PLoS ONE, Jack Van Horn, a UCLA assistant professor of neurology, and colleagues note that while approximately 4 percent of the cerebral cortex was intersected by the rod’s passage, more than 10 percent of Gage’s total white matter was damaged. The passage of the tamping iron caused widespread damage to the white matter connections throughout Gage’s brain, which likely was a major contributor to the behavioral changes he experienced.

Because white matter and its myelin sheath — the fatty coating around the nerve fibers that form the basic wiring of the brain — connect the billions of neurons that allow us to reason and remember, the research not only adds to the lore of Phineas Gage but may eventually lead to a better understanding of multiple brain disorders that are caused in part by similar damage to these connections.

“What we found was a significant loss of white matter connecting the left frontal regions and the rest of the brain,” said Van Horn, who is a member of UCLA’s Laboratory of Neuro Imaging (LONI). “We suggest that the disruption of the brain’s ‘network’ considerably compromised it. This may have had an even greater impact on Mr. Gage than the damage to the cortex alone in terms of his purported personality change.” 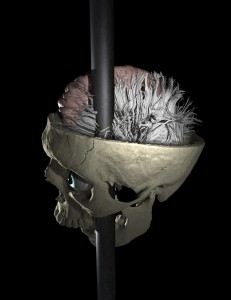 LONI is part of an ambitious joint effort with Massachusetts General Hospital and the National Institutes of Health to document the trillions of microscopic links between every one of the brain’s 100 billion neurons — the so-called “connectome.” And because mapping the brain’s physical wiring eventually will lead to answers about what causes mental conditions that may be linked to the breakdown of these connections, it was appropriate, as well as historically interesting, to take a new look at the damage to Gage’s brain.

Since Gage’s 189-year-old skull, which is on display in the Warren Anatomical Museum at Harvard Medical School, is now fragile and unlikely to again be subjected to medical imaging, the researchers had to track down the last known imaging data, from 2001, which had been lost due to various circumstances at Brigham and Women’s Hospital, a teaching affiliate of Harvard, for some 10 years.

The authors were able to recover the computed tomographic data files and managed to reconstruct the scans, which revealed the highest-quality resolution available for modeling Gage’s skull. Next, they utilized advanced computational methods to model and determine the exact trajectory of the tamping iron that shot through his skull. Finally, because the original brain tissue was, of course, long gone, the researchers used modern-day brain images of males that matched Gage’s age and (right) handedness, then used software to position a composite of these 110 images into Gage’s virtual skull, the assumption being that Gage’s anatomy would have been similar.

Van Horn found that nearly 11 percent of Gage’s white matter was damaged, along with 4 percent of the cortex.

“Our work illustrates that while cortical damage was restricted to the left frontal lobe, the passage of the tamping iron resulted in the widespread interruption of white matter connectivity throughout his brain, so it likely was a major contributor to the behavioral changes he experienced,” Van Horn said. “Connections were lost between the left frontal, left temporal and right frontal cortices and the left limbic structures of the brain, which likely had considerable impact on his executive as well as his emotional functions.”

And while Gage’s personality changed, he eventually was able to travel and find employment as a stagecoach driver for several years in South America. Ultimately, he died in San Francisco, 12 years after the accident.

“The extensive loss of white matter connectivity, affecting both hemispheres, plus the direct damage by the rod, which was limited to the left cerebral hemisphere, is not unlike modern patients who have suffered a traumatic brain injury,” he said. “And it is analogous to certain forms of degenerative diseases, such as Alzheimer’s disease or frontal temporal dementia, in which neural pathways in the frontal lobes are degraded, which is known to result in profound behavioral changes.”

Van Horn noted that the quantification of the changes to Gage’s brain’s pathways might well provide important insights for clinical assessment and outcome-monitoring in modern-day brain trauma patients.

Other authors of the study were Andrei Irimia, Micah C. Chambers, Carinna M. Torgerson and Arthur W. Toga, all of UCLA, and Ron Kikinis of Harvard Medical School. The work was performed as part of the Human Connectome Project (www.humanconnectomeproject.org). The authors report no conflict of interest.