Iron overload is a common condition affecting millions of people worldwide. Excess iron in the body is toxic, and deposits can cause damage to the liver, heart and other organs. Current treatments, researchers say, are not ideal and have significant side effects.

Iron in the body is regulated by a hormone called hepcidin, and a deficiency in this hormone can cause the iron overload seen in genetic disorders like hereditary hemochromatosis and Cooley’s anemia.

In the hopes of finding a treatment for iron overload, UCLA researchers have developed a new type of therapy based on small molecules that mimic the effects of hepcidin in mice. Published online Nov. 1 in the peer-reviewed Journal of Clinical Investigation, their findings could lead to new drugs to help prevent the condition.

Hepcidin works by fitting into a receptor protein known as ferroportin, which causes a change in iron flow in the body. The UCLA team systematically worked with the hormone–receptor interface to learn how the two pieces fit together and which part of hepcidin is the most important for binding to ferroportin.

“Like with jigsaw puzzle pieces, we tried to find the best fit,” said Dr. Elizabeta Nemeth, the study’s senior author and an associate professor of medicine at the David Geffen School of Medicine at UCLA. 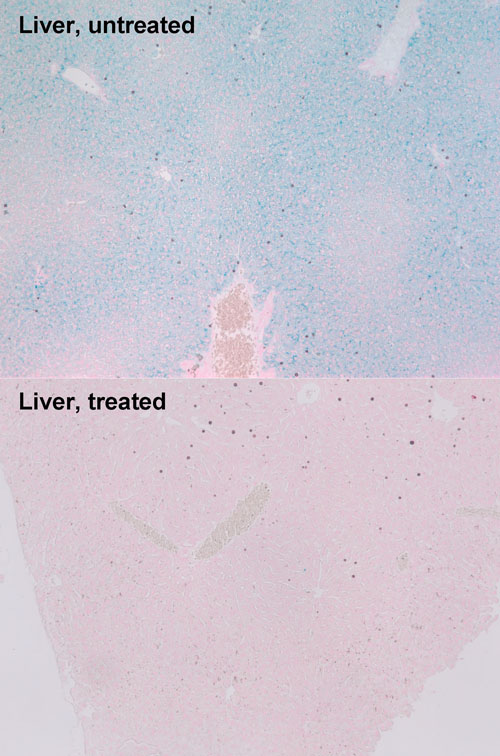 Nemeth, co-director of the UCLA Center for Iron Disorders, noted that this is the first attempt to develop medications that mimic hepcidin. Because hepcidin contains 25 amino acids and numerous disulfide bonds, it would be expensive and difficult to reproduce the hormone as a medication.

The UCLA team zeroed in on the areas of hepcidin and ferroportin that provided the best fit to generate iron-regulating activity. Surprisingly, they found that the first third of the hepcidin molecule had an effect similar to that of the whole molecule. They then re-engineered this portion of the molecule to make it even more effective and named the resulting new molecules “minihepcidins.”

“We found that just a few amino acids were enough to provide an effective scaffold for the minihepcidin design,” said Piotr Ruchala, a visiting assistant professor of medicine at the Geffen School of Medicine. 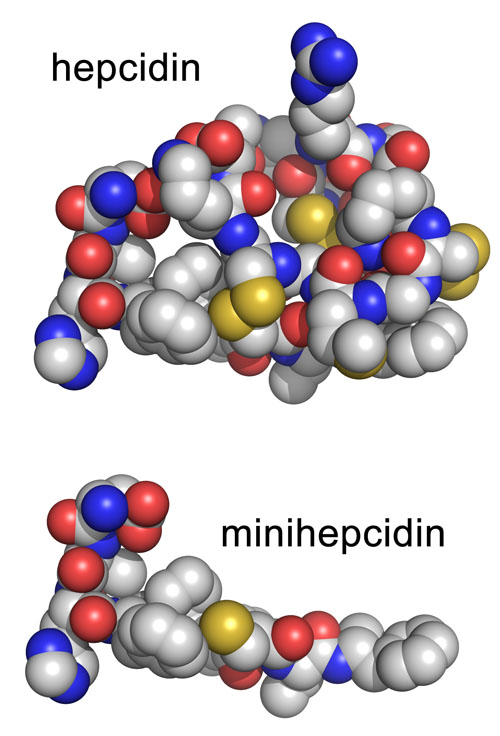 Structure of the human hormone hepcidin (top panel) and the portion used for the minihepcidin design (bottom panel). Image credit: University of California

The team confirmed that the minihepcidins were effective in healthy mice and demonstrated that they could prevent iron overload in mouse models of hereditary hemochromatosis.

“Using this structure and function analysis, we were able to develop minihepcidins that were even more effective than the naturally occurring hormone,” said study author Dr. Tomas Ganz, a professor of medicine and pathology and co-director of the Center for Iron Disorders at the Geffen School of Medicine.

Ganz added that the UCLA findings built on previous research by the team and collaborators around the world that originally helped identify the role of hepcidin and ferroportin in iron regulation.

The next step is to identify the optimal form of minihepcidin for human trials. According to UCLA researchers, if the molecules’ safety and efficacy is confirmed, minihepcidins could be used alone or together with current treatments for iron-overload diseases.

UCLA is currently negotiating a license to this technology with a biotechnology company that will take the minihepcidins through pre-clinical development and into clinical trials.