*A new study at the UA’s Laboratory of Tree-Ring Research has revealed a previously unknown multi-decade drought period in the second century A.D. The findings give evidence that extended periods of aridity have occurred at intervals throughout our past.*

Almost nine hundred years ago, in the mid-12th century, the southwestern U.S. was in the middle of a multi-decade megadrought. It was the most recent extended period of severe drought known for this region. But it was not the first.

The second century A.D. saw an extended dry period of more than 100 years characterized by a multi-decade drought lasting nearly 50 years, says a new study from scientists at the University of Arizona. 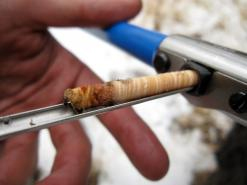 Dendrochronologists extract a small, pencil-shaped sample of wood from a tree with a tool called an increment borer. The tiny hole left in the tree's trunk quickly heals as the tree continues to grow. (Photo by Daniel Griffin/Laboratory of Tree-Ring Research)

“These mountains are very important for both the San Juan River and the Rio Grande River,” said Routson, a doctoral candidate in the environmental studies laboratory of the UA’s department of geosciences  and the primary author of the study, which is upcoming in Geophysical Research Letters.

Dendrochronology is a precise science of using annual growth rings of trees to understand climate in the past. Because trees add a normally clearly defined growth ring around their trunk each year, counting the rings backwards from a tree’s bark allows scientists to determine not only the age of the tree, but which years were good for growth and which years were more difficult. 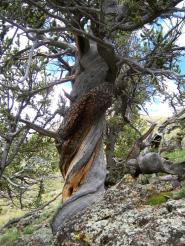 Twisting with time, bristlecone pine trees live for thousands of years on high mountain slopes and record each passing year with a new ring of growth. (Photo by Cody Routson)

“If it’s a wet year, they grow a wide ring, and if it’s a dry year, they grow a narrow ring,” said Routson. “If you average that pattern across trees in a region you can develop a chronology that shows what years were drier or wetter for that particular region.”

To develop their chronology, the researchers looked for indications of climate in the past in the growth rings of the oldest trees in the southern San Juan region. “We drove around and looked for old trees,” said Routson.

Literally nothing is older than a bristlecone pine tree: The oldest and longest-living species on the planet, these pine trees normally are found clinging to bare rocky landscapes of alpine or near-alpine mountain slopes. The trees, the oldest of which are more than 4,000 years old, are capable of withstanding extreme drought conditions.

“We did a lot of hiking and found a couple of sites of bristlecone pines, and one in particular that we honed in on,” said Routson. 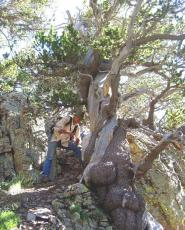 Doctoral candidate Cody Routson of the environmental studies laboratory at the UA's department of geosciences scrambles up a mountain slope to sample a bristlecone pine tree. (Photo by Mark Losleben/Laboratory of Tree-Ring Research)

To sample the trees without damaging them, the dendrochronologists used a tool like a metal screw that bores a tiny hole in the trunk of the tree and allows them to extract a sample, called a core. “We take a piece of wood about the size and shape of a pencil from the tree,” explained Routson.

“We also sampled dead wood that was lying about the land. We took our samples back to the lab where we used a visual, graphic technique to match where the annual growth patterns of the living trees overlap with the patterns in the dead wood. Once we have the pattern matched we measure the rings and average these values to generate a site chronology.”

“In our chronology for the south San Juan mountains we created a record that extends back 2,200 years,” said Routson. “It was pretty profound that we were able to get back that far.”

The chronology extends many years earlier than the medieval period, during which two major drought events in that region already were known from previous chronologies.

“The medieval period extends roughly from 800 to 1300 A.D.,” said Routson. “During that period there was a lot of evidence from previous studies for increased aridity, in particular two major droughts: one in the middle of the 12th century, and one at the end of the 13th century.” 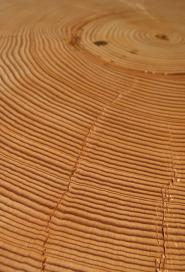 A cross section of wood shows the annual growth rings trees add with each growing season. Dark bands of latewood form the boundary between each ring and the next. Counting backwards from the bark reveals a tree's age. (Photo by Daniel Griffin/Laboratory of Tree-Ring Research)

“Very few records are long enough to assess the global conditions associated with these two periods of Southwestern aridity,” said Routson. “And the available records have uncertainties.”

But the chronology from the San Juan bristlecone pines showed something completely new:

“There was another period of increased aridity even earlier,” said Routson. “This new record shows that in addition to known droughts from the medieval period, there is also evidence for an earlier megadrought during the second century A.D.”

“What we can see from our record is that it was a period of basically 50 consecutive years of below-average growth,” said Routson. “And that’s within a much broader period that extends from around 124 A.D. to 210 A.D. – about a 100-year-long period of dry conditions.”

“We’re showing that there are multiple extreme drought events that happened during our past in this region,” said Routson. “These megadroughts lasted for decades, which is much longer than our current drought. And the climatic events behind these previous dry periods are really similar to what we’re experiencing today.”

The prolonged drought in the 12th century and the newly discovered event in the second century A.D. may both have been influenced by warmer-than-average Northern Hemisphere temperatures, Routson said: “The limited records indicate there may have been similar La Nina-like background conditions in the tropical Pacific Ocean, which are known to influence modern drought, during the two periods.”

Although natural climate variation has led to extended dry periods in the southwestern U.S. in the past, there is reason to believe that human-driven climate change will increase the frequency of extreme droughts in the future, said Routson. In other words, we should expect similar multi-decade droughts in a future predicted to be even warmer than the past.

Routson’s research is funded by fellowships from the National Science Foundation, the Science Foundation Arizona and the Climate Assessment of the Southwest. His advisors, Woodhouse of the School of Geography and Development and Overpeck of the department of geosciences and co-director of the UA’s Institute of the Environment, are co-authors of the study.