A team of researchers from UH Mānoa’s Hawai‘i Institute of Marine Biology (HIMB) has developed an interactive global map of corals and zooxanthellae, commonly known as flagellate protozoa, as part of a hybrid web application titled GeoSymbio. This application provides global-scale biological and ecosystem information on symbiotic zooxanthellae called Symbiodinium, which are uni-cellular, photosynthetic dinoflagellates that live inside the cells of other marine organisms like anemones, jellyfish and corals.

The GeoSymbio application provides the genetic identification and taxonomic description of over 400 distinct Symbiodinium subclades or genetic lineages in invertebrate hosts that have been sampled from a variety of marine habitats, thereby providing a wealth of information for symbiosis researchers in a single online location. By utilizing Google Apps, the team was able to develop this web-based tool to discover, explore, visualize and share data in a rapid, cost-effective and engaging manner. 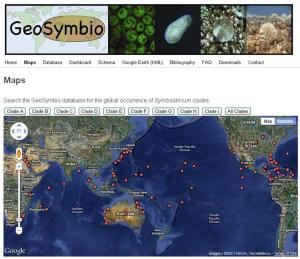 Screenshot of the GeoSymbio maps webpage for geographic visualization of Symbiodinium clades. Image credit: University of Hawaii at Manoa

GeoSymbio is the first comprehensive effort to collate and visualize Symbiodinium ecology, diversity and geography in an online web application that is freely accessible and searchable by the public. To provide access to this information, GeoSymbio was designed to serve four basic functions: (1) geospatial visualization, (2) text-based queries, (3) knowledge summaries, and (4) downloadable data products for further analyses. The application structure draws information from a variety of digital sources and uses a suite of query and visualization tools, with the core of the application hosted remotely or “in the cloud” using Google Sites.

Symbiodinium are responsible for providing energy to their coral hosts, which drives the deposition of calcium carbonate and results in the creation of coral reefs. The differential responses of corals and Symbiodinium types to environmental stressors have important implications for the resiliency of coral reef ecosystems to climate change.

Dr. Tim McClanahan, Senior Conservation Zoologist for the Wildlife Conservation Society, stated that, “Given the pace of climate change and scientific developments around Symbiodinium, GeoSymbio will catalyze the use of this knowledge toward increasing reef resilience and improved management decisions.” 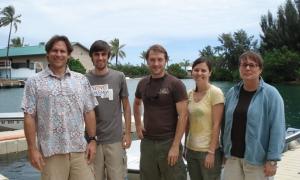 The application’s development began in early 2011, when the HIMB researchers were tasked with compiling global data on coral-based Symbiodinium for analysis, as part of the “Tropical Coral Reefs of the Future” working group at the National Center for Ecological Analysis and Synthesis (NCEAS). In previous years, the team had created a database with approximately 2,500 records of these Symbiodinium data from sources such as GenBank (the primary repository for Symbiodinium and all other organisms’ genetic sequence information) and journal articles, however, the information was only accessible within the research group. All this changed in 2011, when the research team decided to create and share a low-cost, integrative web application based on the symbiont database.

HIMB Junior Specialist Erik Franklin, one of the lead developers of the project, is excited about the product. He recently presented the website at the Environmental Information Management 2011 Conference. Franklin stated that “building the capacity to examine the diversity of Symbiodinium on coral reefs has global and societal implications for tropical nations and thus, the dissemination of this information is essential. One of the major barriers to progress was that the geographic details of the Symbiodinium records were not documented well in existing databases, and our GeoSymbio app now resolves this problem and provides open data sharing.”

GeoSymbio provides the first and only web-based application for data discovery, visualization and sharing of global-scale Symbiodinium research. This tool should expedite new insights into their ecology, biogeography, and evolution in the face of a changing global climate.