The site of a volcano isn’t the first place one might think of to study cooperation. But neuroscientist Eric Fortune of Johns Hopkins University and colleagues went to the slopes of Antisana volcano in Ecuador to study cooperation as it plays out with a very special songbird, the plain-tailed wren. Funded in part by the National Science Foundation, the researchers report their observations in the Nov. 4, 2011, issue of Science.

Rapidly alternating their singing back and forth, female and male wrens cooperate to sing a duet that sounds as if a single bird sang it. The researchers assumed that the brain of each bird would have a memory of its own part of the duet, and also have a memory of the cues from its partner. They were surprised to find that both brains had a record of the complete duet–a performance that neither bird can do by itself. 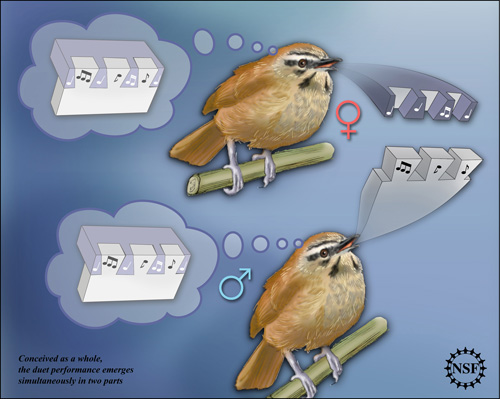 The researchers were surprised to find that the brains of both birds had a record of the complete duet--a performance that neither bird can do by itself. Image credit: Zina Deretsky, National Science Foundation

As with humans dancing a tango, one could assume that both people know their own parts of the dance and the cues from their partner, but this research suggests that both partners’ brains have a powerful representation of the complete tango performance.

This simple insight from these dueting wrens is a new way to looking at cooperation. Perhaps in human endeavors it is more important to have an image of what a group wants to achieve than each participant’s own tasks.

More information on this research is available in this news release from Johns Hopkins University.