Speaking to University of Delaware faculty and students and community members in Brown Lab on Monday night, Oct. 15, environmental philosopher Kathleen Dean Moore discussed how important it is for humans to realize their ethical responsibility to save the world from a climate crisis.

In a lecture titled “Why It’s Wrong to Wreck the World: Climate Change and the Moral Obligation to the Future,” Moore reflected on the relationship humans have with the environment and argued that once humans realize the impact of their actions, they will naturally feel a moral obligation to care for the planet.

Moore, who is Distinguished Professor of Philosophy at Oregon State University, co-edited Moral Ground: Ethical Action for a Planet in Peril, a collection of essays by more than 80 figures from around the world who give various ethical reasons why humans should protect the planet.

In her discussion, Moore speculated that aliens visiting and observing Earth would be struck by how humans can love their planet, taking long walks into nature and letting animals live in their homes, and yet inflict such great harm on the environment.

“We treat the oceans like dirt, cause the extinction of one-tenth of all organisms, torch the forests and release carbon dioxide into the atmosphere,” she said. “Then we are surprised when the climate turns on us.”

Moore said that countless people around the world are suffering because of famine, droughts and other phenomena fueled by climate change.

“Climate change will be the biggest human rights violation in history,” she said, as a picture of a family in a poor country walking through floodwaters flashed on the screen behind her. “The suffering will be unjust by any principle of distribution. People who suffer the most will suffer to pay the cost of the privilege of others.” 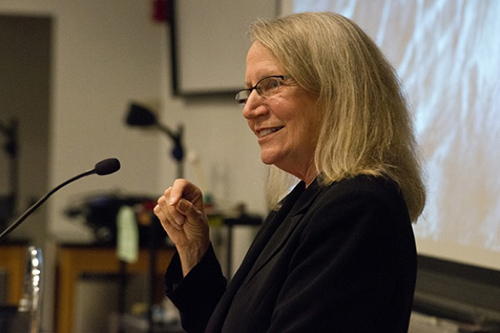 Kathleen Dean Moore: “We treat the oceans like dirt, cause the extinction of one-tenth of all organisms, torch the forests and release carbon dioxide into the atmosphere. Then we are surprised when the climate turns on us.” Photo by Lane McLaughlin

Moore also spoke about the harm the climate crisis is inflicting on animals. Her presentation included a picture of the decomposing remains of a baby albatross whose mother had inadvertently poisoned it by feeding it plastic. The decomposed remains showed that, at the time of death, the bird’s stomach was full of everyday household items including a lighter and several bottle caps.

While Moore emphasized the damage humans are causing to the environment and to the planet’s species, she said she opposed the notion that each person individually is the planet’s enemy.

“How can we blame ourselves individually while oil companies continue to take actions to increase their harm on the planet and suppress any measures of resistance we try to take?” she said. “I don’t think we were the ones who took shortcuts that caused an oil spill in the Gulf of Mexico.”

Moore ended her lecture on a positive note, reminding her audience of the beauty and joy of life, and then emphasized the planet’s role in allowing people to experience it.

“You are truly the Earth’s last hope to save the beauty and joy of our lives,” she said.

In addition to Moral Ground, Moore has authored and edited several other books including, Wild Comfort: The Solace of Nature and Holdfast: Riverwalking: Reflections on Moving Water. She is the co-founder of Spring Creek Project for Ideas, Nature and the Written Word at Oregon State University. Her talk Monday night was presented by the Center for Science, Ethics and Public Policy at UD and was co-sponsored by the Delaware Environmental Institute, Delaware EPSCoR, and the College of Arts and Sciences Environmental Humanities Working Group.