A Tradition is Born

It’s not every day you get to meet somebody who’s made history.

That happened in September for the young men of Huntley House, a section of Sanford Hall for black, male first-year students.

The students met Huntley House namesake Horace Huntley, who in 1969 took part in the takeover of Morrill Hall and occupation of the president’s office. The action called attention to the situation of black University of Minnesota students and led to the creation of what is now the Department of African American & African Studies. 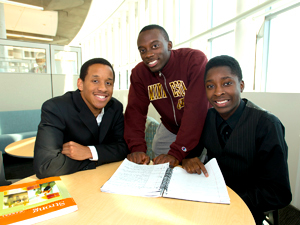 Kohlman Thompson, Eric Dormoh, and Barflaan Tedoe (l to r.) are making their marks as part of the first members of Huntley House. Photo by: Patrick O'Leary

The meeting happened during a kickoff for Huntley House, which is in its inaugural year. It has three residents and one member from another residence hall; together, these four are a small but solid nucleus of what the students and their advisers hope will grow into a large fellowship of black male undergraduates who help each other and the surrounding community.

Huntley House exists to provide “a sense of community and connectedness for African American males that will foster their personal and academic growth and their success in college and beyond.”

With only about 75 black male undergrads (excluding varsity athletes) on campus, “there’s a need to decrease isolation and create a sense of community in this big institution,” says Patrick Troup, coordinator for Huntley House and the U’s director of retention initiatives. “[They should] have role models and links with faculty and staff who’ve been through the kinds of experiences they have. We want to expose them to the variety of being African-American and push them to be true leaders on campus, socially and academically.”

The impetus for Huntley House came from Jasmine Omorogbe, an alum now studying at Harvard, who was working in the Office of Admissions and had noted the dearth of black male undergrads.

“She said, ‘This idea has been kicking around for a long time’ and got us together last October,” says Walt Jacobs, an associate professor of African American & African studies and special projects coordinator in the Office of Undergraduate Education. “So Patrick and I led it from there.”

The members of Huntley House get together regularly with Troup, Jacobs, peer adviser Allan Kerandi, and community adviser Profit Idowu, who guides them as they select community service projects for the spring.

“I want to be around young black men because it’s powerful to be together and do good things around the community,” says freshman Eric Dormoh, who plans a career in pharmacy. “Our image hasn’t always been favorable.”

“In high school, I didn’t care about volunteering, but now I want to get involved,” says freshman Kohlman Thompson, who is interested in English and journalism. “They immerse us in our culture—for example, by showing and discussing the films of Spike Lee and what they mean to kids like me.” 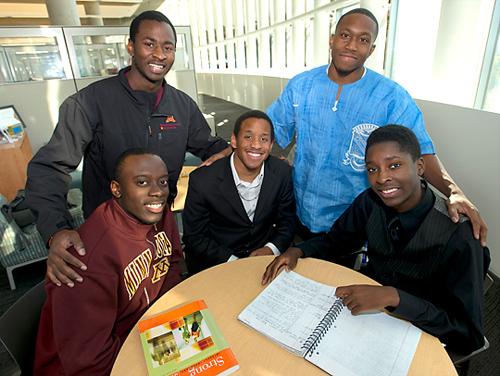 Meeting a living historical figure like Huntley and hearing how he and fellow students took risks to bring about change brought home to the students that they have a chance to make history of their own.

“I’d like this first group to put Huntley House on the map and make people want to get involved,” says Thompson.

Idowu holds one focused initiative, one hallwide event, and one social event for Huntley House students every month. He and Thompson arranged for the group to watch the opening of the NFL season (Giants vs. Cowboys), and they’re planning to visit the Dead End Hay Ride in Wyoming, Minnesota before Halloween. The group is also making a video to document its first year with Huntley House.

All are eager to draw more young men into the program and see it grow next year. For freshman Barflaan Tedoe, who contemplates a career in law or sports management, the draws are many.

“It made me feel a little bit special,” he says. “Our advisers are willing to help with anything—it’s like having a second dad, or a third dad. [With the video] we want to show that Huntley House is fun, even though we’re serious.”