Unlike most organisms, they don’t need iron, but they crave manganese

Scientists have confirmed that the pathogen that causes Lyme Disease—unlike any other known organism—can exist without iron, a metal that all other life needs to make proteins and enzymes. Instead of iron, the bacteria substitute manganese to make an essential enzyme, thus eluding immune system defenses that protect the body by starving pathogens of iron.

To cause disease, Borrelia burgdorferi requires unusually high levels of manganese, scientists at Johns Hopkins University (JHU), Woods Hole Oceanographic Institution (WHOI), and the University of Texas reported. Their study, published March 22, 2013, in The Journal of Biological Chemistry, may explain some mysteries about why Lyme Disease is slow-growing and hard to detect and treat. The findings also open the door to search for new therapies to thwart the bacterium by targeting manganese.

“When we become infected with pathogens, from tuberculosis to yeast infections, the body has natural immunological responses,” said Valeria Culotta, a molecular biologist at the JHU Bloomberg School of Public Health. The liver produces hepcidin, a hormone that inhibits iron from being absorbed in the gut and also prevents it from getting into the bloodstream. “We become anemic, which is one reason we feel terrible, but it effectively starves pathogens of iron they need to grow and survive,” she said. 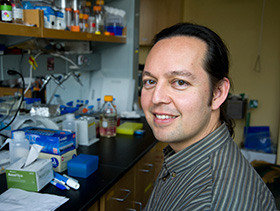 Borrelia, with no need for iron,has evolved to evade that defense mechanism. In 2000, groundbreaking research on Borrelia’s genome by James Posey and Frank Gherardini at the University of Georgia showed that the bacterium has no genes that code to make iron-containing proteins and typically do not accumulate any detectable iron.

Culotta’s lab at JHU investigates what she called “metal-trafficking” in organisms­—the biochemical mechanisms that cells and pathogens such as Borrelia use to acquire and manipulate metal ions for their biological purposes.

“If Borrelia doesn’t use iron, what does it use?” Culotta asked. 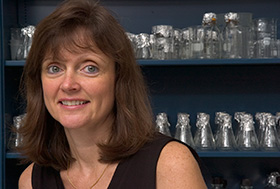 Valeria Culotta’s lab at Johns Hopkins University’s Bloomberg School of Public Health investigates what she called “metal-trafficking” in organisms¬—the biochemical mechanisms that cells and pathogens use to acquire and manipulate metal ions for their biological purposes. Knowing details of how that happens offers ways to disrupt the process and deter disease. (Photo by JHU Bloomberg School of Public Health)

To find out, Culotta’s lab joined forces with Mak Saito, a marine chemist at WHOI, who had developed techniques to explore how marine life uses metals. Saito was particularly intrigued because of the high incidence of Lyme Disease on Cape Cod, where WHOI is located, and because he specializes in metalloproteins, which contain iron, zinc, cobalt, and other elements often seen in vitamin supplements. The metals serve as linchpins, binding to enzymes. They help determine the enzymes’ distinctive three-dimensional shapes and the specific chemical reactions they catalyze.

It’s difficult to identify what metals are within proteins because typical analyses break apart proteins, often separating metal from protein. Saito used a liquid chromatography mass spectrometer to distinguish and measure separate individual Borrelia proteins according to their chemical properties and infinitesimal differences in their masses. Then he used an inductively coupled plasma mass spectrometer to detect and measure metals down to parts per trillion. Together, the combined analyses not only measured the amounts of metals and proteins, they showed that the metals are components of the proteins.

“The tools he has are fantastic,” Culotta said. “Not too many people have this set of tools to detect metalloproteins.” 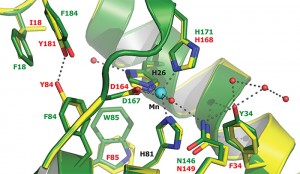 Saito collaborated with biomedical researchers at Johns Hopkins University, applying his proteomic techniques to explore proteins in a terrestrial organism, the bacteria that cause Lyme Disease. Unlike all other known organisms, Borrelia burgdorferi need manganese (blue dot), rather than iron, to serve as linchpins bonded into key enzymes. The scientists found that to cause disease, Borrelia require unusually high levels of manganese. The findings open new avenues to search for ways to attack the bacteria. Illustration by P. John Hart, University of Texas (Click image to enlarge)

The experiments revealed that instead of iron, Borrelia uses that element’s next-door neighbor on the periodic chart, manganese, in certain Borrelia enzymes. These include an amino peptidase and an important antioxidant enzyme called superoxide dismutase.

The discoveries open new possibilities for therapies, Culotta said. “The only therapy for Lyme Disease right now are antibiotics like penicillin, which are effective if the disease is detected early enough. It works by attacking the bacteria’s cell walls. But certain forms of Borrelia, such as the L-form, can be resistant because they are deficient in cell walls.”

“So we’d like to find targets inside pathogenic cell that could thwart their growth,” she continued. “The best targets are enzymes that the pathogens have, but people do not, so they would kill the pathogens but not harm people.” Borrelia’s distinctive manganese-containing enzymes such as superoxide dismutase may have such attributes.

In search of new avenues of attack, the groups are planning to expand their collaborative efforts by mapping out all the metal-binding proteins that Borellia uses and investigating biochemical mechanisms that the bacteria use to acquire manganese and directs it into essential enzymes. Knowing details of how that happens offers ways to disrupt the process and deter Lyme Disease.