ARMONK, N.Y. – 11 Oct 2011: A new IBM study of more than 1,700 chief marketing officers from 64 countries and 19 industries reveals that the majority of the world’s top marketing executives recognize a critical and permanent shift occurring in the way they engage with their customers, but question whether their marketing organizations are prepared to manage the change.

At the same time, the research shows that the measures used to evaluate marketing are changing. Nearly two-thirds of CMOs think return on marketing investment will be the primary measure of the marketing function’s effectiveness by 2015. But even among the most successful enterprises, half of all CMOs feel insufficiently prepared to provide hard numbers.

And most of these executives – responsible for the integrated marketing of their organization’s products, services and brand reputations – say they lack significant influence in key areas such as product development, pricing and selection of sales channels.

“The inflection point created by social media represents a permanent change in the nature of customer relationships,” said Carolyn Heller Baird, CRM research lead for the IBM Institute for Business Value and the global director of the study. “Approximately 90 percent of all the real-time information being created today is unstructured data. CMOs who successfully harness this new source of insight will be in a strong position to increase revenues, reinvent their customer relationships and build new brand value.”

Customers are sharing their experiences widely online, giving them more control and influence over brands. This shift in the balance of power from organizations to their customers requires new marketing approaches, tools and skills in order to stay competitive. CMOs are aware of this changing landscape, but are struggling to respond. More than 50 percent of CMOs think they are underprepared to manage key market forces – from social media to greater customer collaboration and influence – indicating that they will have to make fundamental changes to traditional methods of brand and product marketing.

Baird likened marketers who underestimate the impact of social media to those who were slow to view the Internet as a new and powerful platform for commerce. Like the rise of e-business more than a decade ago, the radical embrace of social media by all customer demographic categories represents an opportunity for marketers to drive increased revenue, brand value and to reinvent the nature of the relationship between enterprises and the buyers of their offerings. Marketers who establish a culture receptive to deriving insight from social media will be far better prepared to anticipate future shifts in markets and technology.

While they identify customer intimacy as a top priority, and recognize the impact of real-time data supplementing traditional methods of channel marketing and gathering market feedback, most CMOs say they remain mired in 20th century approaches. Eighty-percent or more of the CMOs surveyed are still focusing primarily on traditional sources of information such as market research and competitive benchmarking, and 68 percent rely on sales campaign analysis to make strategic decisions.

Collectively, the study findings point to four key challenges that CMOs everywhere are confronting: the explosion of data, social media, channel and device choices and shifting demographics will be pervasive, universal game changers for their marketing organizations over the next three to five years. But a large majority of CMOs feel unprepared to manage their impact. 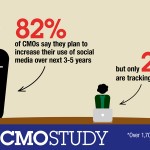 A new IBM study of more than 1,700 chief marketing officers reveals that most CMOs feel underprepared to manage the impact of key changes in the marketing arena. While 82 percent say they plan to increase their use of social media over the next three to five years, only 26 percent are currently tracking blogs to shape their marketing strategies. Image credit: IBM

Data explosion: Every day we create 2.5 quintillion bytes of data – so much that 90 percent of the world’s data today has been created in the last two years alone. The increasing volume, variety and velocity of data available from new digital sources like social networks, in addition to traditional sources such as sales data and market research, tops the list of CMO challenges. The difficulty is how to analyze these vast quantities of data to extract the meaningful insights, and use them effectively to improve products, services and the customer experience.

Social platforms: Social media enables anyone to become a publisher, broadcaster and critic. Facebook has more than 750 million active users, with the average user posting 90 pieces of content a month. Twitter users send about 140 million tweets a day. And YouTube’s 490 million users upload more video content in a 60-day period than the three major U.S. television networks created in 60 years. Marketers are using social platforms to communicate – with 56 percent of CMOs viewing social media as a key engagement channel – but they still struggle with capturing valuable customer insight from the unstructured data that customers and potential customers produce.

Channel and device choices: The growing number of new marketing channels and devices, from smart phones to tablets, is quickly becoming a priority for CMOs. Mobile commerce is expected to reach $31 billion by 2016, representing a compound annual growth rate of 39 percent from 2011 to 2016. Meanwhile, the tablet market is expected to reach nearly 70 million units worldwide by the end of this year, growing to 294 million units by 2015.

Shifting demographics: New global markets and the influx of younger generations with different patterns of information access and consumption are changing the face of the marketplace. In India, as one example, the middle class is expected to soar from roughly 5 percent of the population to more than 40 percent in the next two decades. Marketers who have historically focused on affluent Indian consumers must adapt their strategies to market to this emerging middle class. In the United States, marketing executives must respond to the aging baby boomer generation and growing Hispanic population.

Today’s CMOs have to cover more ground than ever before. They have to manage more data from disparate sources, understand and engage with more empowered customers, adopt and adapt to more sophisticated tools and technologies – while being more financially accountable to their organizations.

In fact, 63 percent of CMOs believe return on investment (ROI) on marketing spend will be the most important measure of their success by 2015. However, only 44 percent feel fully prepared to be held accountable for marketing ROI.

Most CMOs have not traditionally been expected to provide hard financial evidence of their ROI. But given the current economic volatility and pressure to be profitable, organizations can no longer afford to write a blank check for their marketing initiatives. CMOs recognize they now need to quantify the value they bring to the business, be it from investing in advertising, new technologies or any other activity.

This increasing emphasis on ROI also reflects the scrutiny the marketing function is currently attracting, itself a reflection of the function’s growing prominence. Today’s CMOs are in much the same position as chief financial officers (CFOs) were a decade ago, when the CFO’s role was evolving from guardian of the purse strings to strategic business adviser.

If CMOs are to be held responsible for the marketing returns they deliver, they must also have significant influence over all “Four Ps”: promotion, products, place and price. The study found that this is often not the case.

CMOs say they exert a strong influence over promotional activities such as advertising, external communications and social media initiatives. But, in general, they play a smaller role in shaping the other three Ps. Less than half of the CMOs surveyed have much sway over key parts of the pricing process, and less than half have much impact on new product development or channel selection.

To meet these new challenges, CMOs must boost their own digital, technological and financial proficiency – but many seem surprisingly reticent in this respect. When asked which attributes they will need to be personally successful over the next three to five years, only 28 percent said technological competence, 25 percent said social media expertise and 16 percent said financial acumen.

About the Global CMO Study

The 2011 IBM Global Chief Marketing Officer Study is IBM’s first study of CMOs — and the fifteenth in the ongoing series of C-suite Studies developed by the IBM Institute for Business Value. Between February and June 2011, IBM met face to face with 1,734 CMOs in 19 industries and 64 countries to better understand their goals and the challenges they confront. The respondents came from a wide variety of organizations, ranging from 48 of the top 100 brands listed in the 2010 Interbrand rankings to enterprises with a primarily local profile.

To join the conversation on the 2011 IBM Global CMO Study, follow @IBMIBV and #IBMCMOStudy on Twitter, or join us on LinkedIn.