A technique for creating a new molecule that structurally and chemically replicates the active part of the widely used industrial catalyst molybdenite has been developed by researchers with the U.S. Department of Energy’s Lawrence Berkeley National Laboratory (Berkeley Lab). This technique holds promise for the creation of catalytic materials that can serve as effective low-cost alternatives to platinum for generating hydrogen gas from water that is acidic.

Christopher Chang and Jeffrey Long, chemists who hold joint appointments with Berkeley Lab and the University of California (UC) Berkeley, led a research team that synthesized a molecule to mimic the triangle-shaped molybdenum disulfide units along the edges of molybdenite crystals, which is where almost all of the catalytic activity takes place. Since the bulk of molybdenite crystalline material is relatively inert from a catalytic standpoint, molecular analogs of the catalytically active edge sites could be used to make new materials that are much more efficient and cost-effective catalysts.

“Using molecular chemistry, we’ve been able to capture the functional essence of molybdenite and synthesize the smallest possible unit of its proposed catalytic active site,” says Chang, who is also an investigator with the Howard Hughes Medical Institute (HHMI). “It should now be possible to design new catalysts that have a high density of active sites so we get the same catalytic activity with much less material.” 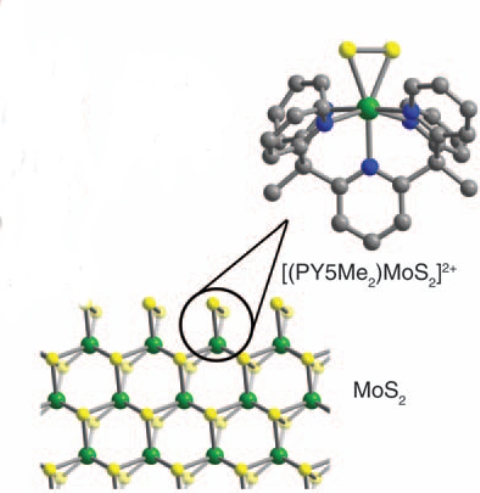 Says Long, “Inorganic solids, such as molybdenite, are an important class of catalysts that often derive their activity from sparse active edge sites, which are structurally distinct from the inactive bulk of the molecular solid. We’ve demonstrated that it is possible to create catalytically active molecular analogs of these sites that are tailored for a specific purpose. This represents a conceptual path forward to improving future catalytic materials.”

Chang and Long are the corresponding authors of a paper in the journal Science describing this research titled “A Molecular MoS2 Edge Site Mimic for Catalytic Hydrogen Generation.” Other authors are Hemamala Karunadasa, Elizabeth Montalvo, Yujie Sun and Marcin Majda.

Molybdenite is the crystalline sulfide of molybdenum and the principal mineral from which molybdenum metal is extracted. Although commonly thought of as a lubricant, molybdenite is the standard catalyst used to remove sulfur from petroleum and natural gas for the reduction of sulfur dioxide emissions when those fuels are burned. Recent studies have shown that in its nanoparticle form, molybdenite also holds promise for catalyzing the electrochemical and photochemical generation of hydrogen from water. Hydrogen could play a key role in future renewable energy technologies if a relatively cheap, efficient and carbon-neutral means of producing it can be developed. 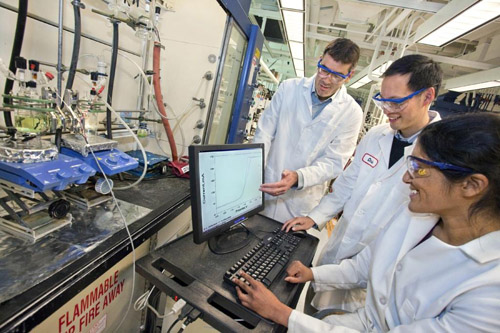 From left, Jeffrey Long, Christopher Chang and Hemamala Karunadasa are paving the way for the creation of catalytic materials that can serve as effective low-cost alternatives to platinum for generating hydrogen gas from water. (Photo by Roy Kaltschmidt, Berkeley Lab Public Affairs)

Currently, the best available technique for producing hydrogen is to split water molecules into molecules of hydrogen and oxygen using platinum as the catalyst. However, with platinum going for more than $2,000 an ounce, the market is wide open for a low cost alternative catalyst. Molybdenite is far more plentiful and about 1/70th the cost of platinum, but poses other problems.

“Molybdenite has a layered structure with multiple microdomains, most of which are chemically inert,” Chang says. “High-resolution scanning tunneling microscopy studies and theoretical calculations have identified the triangular molybdenum disulfide edges as the active sites for catalysis; however, preparing molybdenite with a high density of functional edge sites in a predictable manner is extremely challenging.”

Chang, Long and their research team met this challenge using a pentapyridyl ligand known as PY5Me2 to create a molybdenum disulfide molecule that, while not found in nature, is stable and structurally identical to the proposed triangular edge sites of molybdenite. It was shown that these synthesized molecules can form a layer of material that is analogous to constructing a sulfide edge of molybdenite.

“The electronic structure of our molecular analog can be adjusted through ligand modifications,” Long says. “This suggests we should be able to tailor the material’s activity, stability and required over-potential for proton reduction to improve its performance.”

In 2010, Chang and Long and Hemamala Karunadasa, who is the lead author on this new Science paper, used the PY5Me2 ligand to create a molybdenum-oxo complex that can effectively and efficiently catalyze the generation of hydrogen from neutral buffered water or even sea water. Molybdenite complexes synthesized from this new molecular analog can just as effectively and efficiently catalyze hydrogen gas from acidic water.

“We’re now looking to develop molecular analogs of active sites in other catalytic materials that will work over a range of pH conditions, as well as extend this work to photocatalytic systems” Chang says.

This research was supported by the DOE Office of Science, in part through the Joint Center for Artificial Photosynthesis, a DOE Energy Innovation Hub.