What’s in short supply this winter? If you said snow you guessed the first (and obvious) answer. But you may not have noticed what else has been scarce — birds at backyard feeders.

“Our customers are talking about the fact that fewer birds are coming to feeders this winter,” says Charles Shattuck who, with his wife, Kathy, owns Wild Birds Unlimited in Hockessin. “I’ve heard reports of fewer birds at feeders across the East Coast.”

Although no one can say exactly why birds are staying away, Shattuck has a hunch that lack of snow and mild temperatures are at least part of the reason.

When Shattuck takes a walk through his 14-acre property, he sees plenty of birds in bushes and brambles. But not so many at the feeders, seed logs and suet feeders near his deck and kitchen windows. “Think about this past Wednesday, when it was 60 degrees,” says Shattuck. “The birds can still find bugs to eat when it’s that warm. They don’t need to come to my suet feeders.” 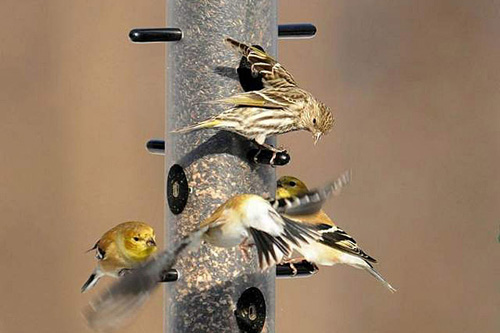 The Great Backyard Bird Count is nearing but figures could be skewed due to recent mild weather. Photo by Derek Stoner

“It’s been a very light winter in terms of bird activity at feeders,” concurs Derek Stoner, an avid birder and naturalist at the Delaware Nature Society. “The big flocks of songbirds — sparrows, juncos, cardinals, titmice, chickadees — are around, but they are dispersed widely. Since we’ve not had extended periods of cold or snow cover, the birds have been fine and doing well with what nature provides.”

When northern Delaware did have a light dusting of snow Jan. 21, the birds decided to pay Shattuck a visit. “Even a small amount of snow drastically changed the activity level at my feeders,” he says.

Several northern species, like red-breasted nuthatches and pine siskins, haven’t arrived in Delaware at all – probably because weather conditions and food supply have been adequate in their breeding grounds in the boreal forests, says Chris Williams, a University of Delaware associate professor of wildlife ecology.

“Pine siskins sometimes appear in Delaware in great numbers; this kind of irregular migration is known as an irruption,” says Williams. “We had such an irruption in 2009.”

The fact that some northern species are staying away and resident birds are staying in the woods and fields doesn’t bode well for the Great Backyard Bird Count. A joint project by Cornell Lab of Ornithology and other partners, the count has become one of the largest citizen-scientist efforts in the nation. This year’s count starts Feb. 17 and concludes Feb. 20 and provides a real-time snapshot of where birds are across the U.S. and Canada.

Last February, 11.4 million birds were counted. This year’s numbers could be lower unless more participants venture out of their backyards. Any bird sighting can be reported to the Great Backyard Bird Count, not just those in the backyard.

“Last year, I saw a common merganser in the Red Clay Creek and vultures in the supermarket parking lot and included both on my checklist,” says Shattuck, who has participated in the count for eight years. His store, along with Wild Birds Unlimited’s other franchise stores, co-sponsor the count.“You can count birds at a park, go on a guided hike or simply make note of birds in a parking lot – any bird seen during the four days of the count qualifies,” he says.

Williams says he believes that the count offers useful data for ornithologists.  Bird populations are dynamic and constantly in flux. No researcher or team of researchers working alone could document the distribution and movements of so many species the way the Great Backyard Bird Count does, he says.

Solny Adalsteinsson is a graduate student in Williams’ research group and a self-avowed “bird nerd.” Growing up in Wilmington and later Kennett Square, Pa., she enjoyed the blue jays, northern cardinals and white-breasted nuthatches in her backyard in wintertime. As an undergraduate at Penn State, she liked to hike in the mountains and look for common ravens, which aren’t found in Delaware.

When she worked in Kauai, Hawaii, in 2009 and 2010, the seasonal shift in birds was subtler. “Many seabirds spend their lives out on the ocean and return to land only to breed so the return of the Laysan Albatross is a sign of ‘winter,’” notes Adalsteinsson. “In November, the albatross pairs return to their nest sites on Kauai and begin their courtship dances, sometimes right in residents’ backyards.”

You’re not going to spot albatrosses in Delaware but there are plenty of other interesting birds you might see if you join the Great Backyard Bird Count.

To register for the Great Backyard Bird Count, or for more info, go to this website. While you’re there, print out a regional bird checklist to help identify what you see. There also are many good bird identification apps to figure out what you’re looking at, says Shattuck.