The wide swings in debate performances by this year’s presidential candidates reflect the fact that in modern campaigns, a candidate’s image is the message, according to linguistic anthropologists who have studied presidential campaigns.

Candidates send important messages to voters through even their smallest gestures, the researchers say. For example, in this year’s first debate, President Barack Obama often looked down at the podium and was criticized for appearing disengaged. In subsequent debates Obama directly addressed his Republican opponent, former Massachusetts Gov. Mitt Romney, and increased the use of a hammering hand gesture sometimes called the “power grip.”

Michael Lempert and Michael Silverstein explore the surprisingly important role of such personal touches in Creatures of Politics: Media, Message and the American Presidency, just published by the Indiana University Press. They conclude that U.S. presidential campaigns are all about a candidate’s brand and celebrity, more than issues brought up at a debate.

“The message is an all-encompassing collage of impressions, including the image politicians project with their personal style and language and the visual images they use to communicate their approachability with the electorate. It’s a form of branding,” said Michael Silverstein, the Charles F. Grey Distinguished Service Professor in Anthropology, Linguistics and Psychology at the University of Chicago.

Candidates take their cues from celebrities who strategically construct and project images to appeal to the public and advance their careers. “In the way of contributing to the message, celebrity becomes a great asset in the realm of political life,” Silverstein said. 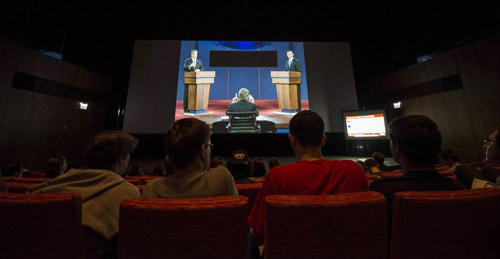 An audience gathers in the Logan Center's Performance Hall for the presidential debate between Barack Obama and Mitt Romney. Photo by Rob Kozloff

Former President George W. Bush, famous for his trouble with language, could be perceived to have done well in the 2004 presidential debate with John Kerry, the researchers say. Bush used the way he spoke, rather than what he said, to create an image that attracted voters.

“Kerry was, ironically, viewed as being the more patrician, based on his grammar and elocution,” Silverstein said. “And so he seemed like somebody who wasn’t real. When you look at Bush’s bloopers, they weren’t really bloopers at all. They were deliberate efforts to seem real, like a regular person with whom the majority of the audience could identify.”

Lempert and Silverstein see the public fascination with this “message” as a variation of the predatory voyeurism that characterizes our culture’s obsession with celebrities.

“It’s really the ‘TMZ-ization’ of politics,” said Lempert, assistant professor of anthropology at the University of Michigan. “We’ve become habituated to this. Basically, we’ve come to rely on the characterizations of candidates that this system has invented to help us make sense of which candidates we should support.”

“As a society, we know that this is happening, and that it’s now the norm,” Silverstein said. “But we still feel a certain sense of discomfort that marketing techniques that used to be applied only to commodities are now taken for granted in the packaging of presidential contenders.”

This discomfort is expressed by our calling for rational discussion of the issues and by commentators’ questions about whether the candidates that we’re seeing are “real” or “authentic,” the researchers say.

“Electoral politics has always involved presenting a publicly imaginable character to the electorate,” Lempert said. “But today’s communications technologies and the rise of professional consultancy and political marketing have amplified the illusion to be real, or to be seen as being real.

“So we not only have debates, but endless debates about the debates. Rather than just being a chance to talk about the issues, the debates are also a form of theater that allows viewers to take the measure of the candidates, through their appearance, their pronunciation, their use of gestures, even their gaffes.”