COLUMBIA, Mo. — For 50 years, the world’s soybean crop has depended on the use of cyst nematode resistant varieties of beans, but no one knew how these plants fought off the nematode pests. Now, the secrets of resistant soybean plants are finally coming to light. Surprisingly, one of the genes related to nematode resistance in soybeans also has been associated with human diseases including lymphocytic leukemia, spina bifida and cardiovascular disease, according to a team of University of Missouri researchers and their colleagues whose breakthrough was recently published in the journal Nature.

“Nine years ago, when I began investigating the molecular basis of soybean resistance to nematodes in an effort to identify the genes involved, I never imagined it would be this complex,” said Melissa Mitchum, co-author of the paper and associate professor of plant sciences at the University of Missouri’s Bond Life Sciences Center. “The gene responsible for nematode resistance was completely unexpected. The gene, called serine hydroxymethyltransferase (SHMT), is common in nature and found in different kingdoms including both animals and plants. In humans, mutations in the SHMT gene can lead to a deficiency of folate, a B vitamin that is essential to the production and maintenance of cells, and this has been linked to a variety of diseases.” 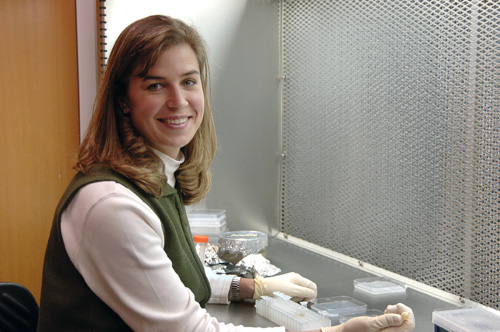 Mitchum and her team collaborated with Khalid Meksem’s group at Southern Illinois University to pinpoint the location of the gene in the soybean genome. They then identified soybean plants from a normally resistant variety, but with a mutated form of the SHMT gene. They observed that these plants had lost resistance to nematodes. In another experiment, the SHMT gene was shut down using two different gene-silencing techniques. These soybeans also became susceptible. A third test put the resistant form of the SHMT gene into normally susceptible soybeans and found that these plants also became resistant.

“Plant breeders can put our results to use immediately,” Mitchum said. “We now know which genes to look for when breeding resistant varieties. Nematode resistance also can now be directly inserted into commercially important breeds of soybean. For farmers, developing new forms of resistance to SCN in soybeans can’t come soon enough. Nematodes are developing their own ways around natural defenses. “Hopefully, our discovery has paved the way to enhance the durability of resistant varieties of soybean”

Although plant breeders can use Mitchum’s discovery now, it may be another decade before she and her team discerns the technicalities of nematode resistance. So far, they know that two mutations in the SHMT gene alter the enzyme’s activity in such a way to provide resistance to the plant. Together with Dmitry Korkin’s group, they found that the deformed enzyme malfunctions, particularly in regions of the enzyme known as the binding pockets, where the enzyme interacts with other molecules. Exactly how this affects the nematode is still unclear.

For more details on the discovery, please visit: https://bondlsc.missouri.edu/news/story/61/1