When she says, ‘It’s not you, it’s me,’ it really might be you, UCLA study suggests

Long after women have chosen Mr. Stable over Mr. Sexy, they struggle unconsciously with the decision, according to a new study by UCLA researchers who look at subtle changes in behavior during ovulation.

At their most fertile period, these women are less likely to feel close to their mates and more likely to find fault with them than women mated to more sexually desirable men, the research shows.

“A woman evaluates her relationship differently at different times in her cycle, and her evaluation seems to be colored by how sexually attractive she perceives her partner to be,” said Martie Haselton, a professor of psychology and communication studies at UCLA and senior author of the study.

Nevertheless, the negative feelings appear fleeting, and they don’t seem to affect a woman’s long-term commitment to her romantic relationship, the study found.

“Even when these women are feeling less positive about their relationship, they don’t want to end it,” said Christina Larson, the study’s lead author and a doctoral candidate in social psychology at UCLA. 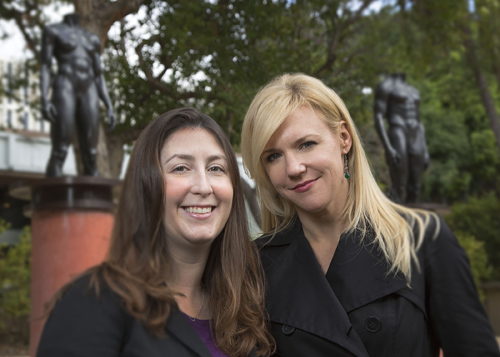 UCLA researchers Christina Larson and Martie Haselton have found that women mated to less sexually appealing men are less likely to feel close to them and more likely to find fault with them during periods of high fertility. (Photo at UCLA's sculpture garden). Image credit: Reed Hutchinson/UCLA

The findings are scheduled to appear in the November issue of the peer-reviewed journal Hormones and Behavior.

Through a series of high-profile studies, Haselton’s lab has revealed telling changes that take place in women’s behavior during ovulation. Possibly to increase the odds of attracting suitable mating partners, these behaviors include a tendency to dress up and to speak in a higher-pitched, more feminine voice and — in a potential inbreeding-avoidance mechanism — to refrain from contact with male kin. In addition, the lab has found that women whose mates are less sexy and masculine tend to be more attracted to other men during the few fertile days leading up to ovulation.

“A lot of research has shown that women’s preferences change over the course of the cycle, but this is the first time that these changes have been shown to have implications for relationship functioning,” Larson said.

She and Haselton began the study by pinpointing the ovulation cycles of 41 undergraduate women involved in long-term heterosexual relationships. They asked the women to rate the sexual attractiveness of their mates by answering such questions as “How desirable do you think women find your partner as a short-term mate or casual sex partner, compared to most men.”

They also asked the women a series of questions designed to measure their partner’s stability or suitability as a long-term mate, including questions about how his present and future financial status compares with that of most men.

Then at two different points in her monthly cycle — at high fertility (just before ovulation) and at low fertility — each woman was asked about the quality of her romantic relationship. The researchers, who used a questionnaire designed exclusively for the study, found no significant change across the cycle in how the women perceived their level of commitment to the relationship or, at least initially, in their satisfaction with it.

But an exercise that required the women to rate how close they felt to their men yielded dramatic results. As women mated to less sexually attractive men moved from their least fertile to most fertile period, their closeness scores dropped one point on a seven-point scale. Women mated to the most sexually attractive men, meanwhile, experienced the opposite effect. As these women moved from their least to most fertile period, their closeness scores rose by a point.

“Women with the really good, stable guy felt more distant at high-fertility periods than low-fertility periods,” Haselton said. “That isn’t the case with women who were mated to particularly sexually attractive men. The closeness of their relationships got a boost just prior to ovulation.” 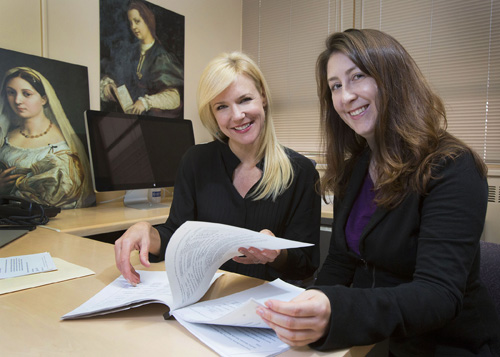 To ensure that the findings were not an anomaly, Haselton and Larson repeated the experiment with 67 other co-eds in long-term relationships. This time, however, the researchers administered a better-recognized measure for relationship satisfaction than the one they originally used. They also administered a questionnaire aimed at illuminating a dimension not studied in the first round: pickiness. The questionnaire asked the women to rate how characteristic such faults as being moody, childish, emotional, thoughtless and critical were of their mate.

The researchers found that women mated to the less sexually attractive men were significantly more likely to find fault with their partners and, again, feel less close to their partners during the high-fertility period than the low-fertility period. Women who rated their mates as more sexually attractive, meanwhile, did not exhibit these changes and instead reported being more satisfied with their relationship at high fertility than at low fertility.

The researchers believe the findings shed light on a suite of conflicting behaviors that stem from mating strategies that might have provided an evolutionary benefit to women’s female ancestors of long ago but today probably serve no other purpose than to stir the domestic pot.

“Since our female ancestors couldn’t directly examine a potential partner’s genetic makeup, they had to base their decisions on physical manifestations of the presence of good genes and the absence of genetic mutations, which might include masculine features such as a deep voice, masculine face, dominant behavior and sexy looks,” said Haselton, who is affiliated with UCLA’s Center for Behavior, Evolution, and Culture.

“It is possible that we evolved to feel drawn to these visible markers because, at least in the past, they proved to be indicators of good genes,” she said. “Ancestral women who were attracted to these features could have produced offspring who were more successful in attracting mates and producing progeny.”

But as any mother with mounting bills and laundry can attest, women do not look only for good genes in a potential partner.

“In the reproductive arena, women probably evolved to desire men who could contribute both quality care and good genes,” Haselton said. “The problem is that there is a limited number of potential mates who are high in both. So many women are forced to make trade-offs.”

She calls the urge for a stable long-term partner along with the increased desire for a more sexually attractive mate during periods of high fertility the “dual mating hypothesis.”

Haselton and Larson next plan to look at whether fault-finding and the feelings of distance and dissatisfaction have any long-term destabilizing effects on the relationships of women with less sexually attractive men.

They also plan to look into how, if at all, the behavior is perceived by the male partners of these women.

“We don’t know if men are picking up on this behavior, but if they are, it must be confusing for them,” Larson said.