When it comes to stress, oysters know how to deal. The tough-shelled mollusks can survive temperature fluctuations, toxic metals and exposure to air, and a new study of their genetic makeup is helping to explain how.

An international team of scientists, including the University of Delaware’s Patrick M. Gaffney, professor of marine biosciences, sequenced the genome of the Pacific oyster, Crassostrea gigas, in a Nature paper published on Sept. 19.

Their analysis revealed that the oysters have unusually high numbers of genes linked to coping with harsh, dynamic environments. For example, oysters have 88 genes for heat shock — five times more than humans — that help them handle temperatures up to 120 degrees Fahrenheit when hit by direct sunlight during low tide. 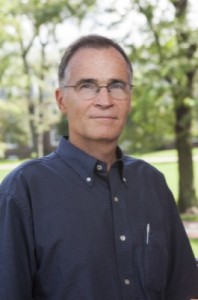 Patrick M. Gaffney, professor of marine biosciences, was a co-author on a Nature paper on the oyster genome. Photo by Ambre Alexander

The oysters are also aided by an abundance of genes that combat toxic chemicals, defend against air exposure, withstand low-salinity surroundings and bolster immune response to pathogens. Forty-eight genes code to prevent apoptosis, or the daily death of cells in an organism, compared with only eight such genes in humans, the researchers found.

The oyster was the first bivalve genome to be sequenced, providing a reference to researchers worldwide for future studies in molluscan biology and evolution.

“It’s basically just a starting point,” Gaffney said. “There is a huge amount of work to do looking at interactions of genes and their affect on growth, survival, disease resistance and other factors.”

Potential implications for future research range from medical applications to aquaculture management. The scientists found that the structure of oyster shells is a highly complex matrix, and better understanding of the way the shells grow could assist bioengineering projects.

“We hope it will provide a framework to look at the eastern oyster,” Gaffney said. “We suspect that a lot of the basic genetic architecture is fairly similar.”

Scientists may also use the genomic data to study how oysters and other shellfish fare as the ocean becomes more acidic. Some suspect that drops in the water’s pH could hinder shell formation.

Currently Gaffney’s next step is examining transposable genes in oysters — bits of DNA that move around the genome. These free riders are abundant and active in the filter feeders, he said, perhaps contributing to the overall variability in oyster physiology.

He is using chromosome sequences that he contributed to the overall genome project, along with his advice to colleagues on making sense of the oyster’s genetic code.

“My involvement was helping to provide the materials and insight for tackling a very variable genome,” Gaffney said.