As the U.S. presidential election approaches, many voters become voracious consumers of online political news. A tool by a University of Washington researcher tracks whether all those articles really provide a balanced view of the debate – and, if not, suggests some sites that offer opinions from the other side of the political spectrum.

Balancer, a free plug-in for Google’s Chrome browser, was developed this summer by Sean Munson, a new UW assistant professor of Human Centered Design and Engineering. The tool analyzes a person’s online reading habits for a month and calculates the political bias in that behavior. It then suggests sites that represent a different point of view and continues to monitor reading behavior and offer feedback.

“I was a bit surprised when I was testing out the tool to learn just how slanted my own reading behavior was,” Munson said. “Even self-discovery is a valuable outcome, just being aware of your own behavior. If you do agree that you should be reading the other side, or at least aware of the dialogue in each camp, you can use it as a goal: Can I be more balanced this week than I was last week?” 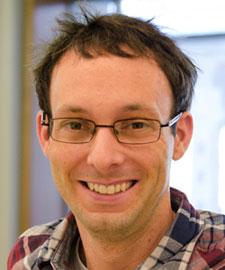 The tool classifies more than 10,000 news websites and sections of news websites on a spectrum ranging from far left to far right, using results of previous studies and existing media-bias indices. For a few popular sites the tool also tries to classify individual columnists whose views may be different from those of the overall publication’s slant.

If a reader’s habits swing to one side of the spectrum, the tool will suggest top news sites on the other side. As more people start using the tool, it will instead suggest articles currently popular among study participants who show a different political bias.

People who install the tool get a cartoon of a tightrope walker holding a stick with a red block on one end and a blue block on the other end. If their reading is balanced, the blocks are equal and the stick is level. If not, the stick begins to tilt to one side as the character appears increasingly distressed. The experimental tool is now used by a few dozen people, and researchers hope to recruit more before the November election.

It’s not perfect. While the tool tracks all the reading in that Web browser, it misses reading on mobile browsers, through mobile apps and, of course, reading on paper. Munson also would like to develop more targeted ways to classify individual articles and to include more than just Democrat and Republican slants.

The tool was developed at the University of Michigan, where Munson earned his doctorate, with funding from the National Science Foundation.

Back when cable news talk shows and the Internet first emerged, Munson said, many experts feared they would fragment news consumers into ideologically specific camps. Instead, it seems some people gravitate toward coverage that reinforces their opinions, he said, while other people use technology to seek out more diverse coverage. His research seeks to understand people’s habits and learn how technology might influence their behaviors.

“Depending on whether I wake up on the right or wrong side of the bed I either think that there’s this incredible potential for political discussion online, if we could only get it right, or that it’s just this huge problem,” he said.

Munson started a political blog as a high school student in New Jersey, and in his junior year in college he was awarded press credentials to the 2004 Democratic National Convention.

“My goal with the blog had been to have a dialogue and in the process educate myself about politics,” he said. But he found most of his readers already shared his opinions. “In the end I didn’t feel like there was any sort of deliberative discussion or progress made, and I hadn’t learned a lot in the process.” He stopped posting and deleted the blog.

His research now explores ways the Internet might be used to encourage constructive political dialogue, as opposed to the echo chamber of partisan news sites or what he describes as the “appalling cesspool” of some online comments.

Munson is also teaching a UW research class this quarter on the Internet and the 2012 election, which will explore topics such as political news reading habits, the spread of political rumors online and the intersection of political preferences and social networking sites.