After a nearly 5,000-year vigil upon a Nevada mountaintop, an ancient tree now finds its home in the UA Laboratory of Tree-Ring Research. A member of the long-lived Bristlecone pine species, the tree called Prometheus is the oldest individual ever known to have lived. Its age was not accurately known until a few years ago.

On a craggy, windswept peak in a lonely Nevada wilderness stands a grove of old-growth trees. Gnarled and twisted, shaped by the weather and whirling winds into erratic growth forms, their roots have clung to the pebble-strewn mountainside for literally millennia.

On the far side of the Earth, the great pyramids were erected in Egypt and Homer wrote his epic tales, the ancient Roman Empire rose and fell, and humans built the North American cities, roads and railways of today – all in the lifespan of these trees.

This is not just any old-growth grove. These are members of the species Pinus longaeva, or Bristlecone pine, the world’s longest-living individual trees.

“There is an argument that unless there’s an extremely stressful period of time or they’re struck by lightning or killed by fire, there’s not a physiological reason for these trees to die,” said Rex Adams, senior research specialist at the University of Arizona’s Laboratory of Tree-Ring Research. 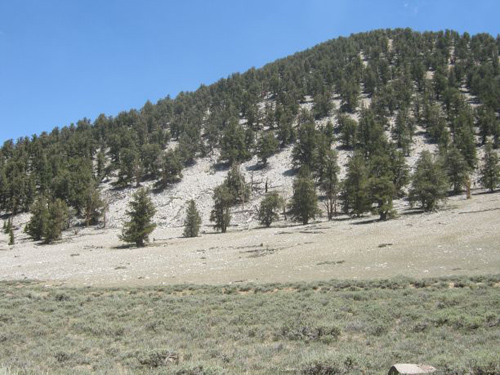 A grove of Bristlecones has kept a silent vigil atop Nevada’s desolate Wheeler Peak for millennia. “The idea of a single individual surviving for 5,000 years rooted in place is truly remarkable and I think strikes awe in most of us,” said UA dendrochronologist Chris Baisan, who first established the age of Prometheus, the oldest known tree. (Image by: Rex Adams/LTRR)

The lab houses pieces of the oldest Bristlecone pine ever known to have lived, a tree called Prometheus after the Titan of Greek mythology. But how the pieces came there is a tragic tale.

In the summers of 1963 and 1964, Donald Currey, a graduate student at the University of North Carolina, climbed Wheeler Peak in Nevada’s Snake Range to where the Bristlecone pines stand in the cold mountain wind.

Currey, a student in geography, wanted to find a minimum date for the formation of the local glacial features. He decided to determine the age of the trees, reasoning that the earliest they could have become established on the mountainside would have coincided with the recession of the glaciers.

As a tree ages, it grows outward, forming a new ring around its trunk each year. Its age can be determined by counting the annual growth rings from the living layer just below the bark all the way to the pith, the center of the tree from which the rings emanate.

Dendrochronologists, who study tree rings, can sample most trees with skill and patience and a tool called a Swedish increment borer that harmlessly removes a slender core from the trunk, which shows the rings of the tree but does no lasting damage.

Since the living part of the tree is the outer layer just below the bark, and all the wood inside is dead, the injury done by an increment borer to a living tree is very small, about equivalent to the skin prick of a human flu shot. 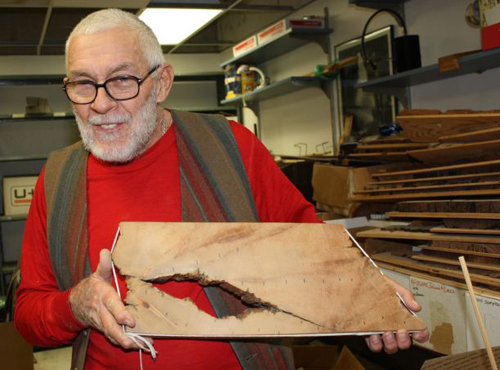 Currey extracted cores from the Bristlecone trees, but found counting the sometimes paper-thin rings of the twisted and gnarly wood an impossible task. He decided only a complete cross-section would give him an accurate ring count. With permission from the U.S. Forest Service, Currey selected an especially old tree, dubbed WPN 114 for his study, and he cut it down.

Only later in his hotel room, counting the rings on the cross-sections of wood that his chainsaw had rendered, did Currey realize that the tree he had felled was more than 4,800 years old – older than any known living tree.

“The tragedy of Prometheus is that it would have been possible with one or two cores to establish the age of the tree with great accuracy – much greater than was possible for Currey by having it cut down and trying to count its rings,” said Chris Baisan, a dendrochronologist at the Laboratory of Tree-Ring Research.

Amidst public outcry in the wake of the event, Wes Ferguson, then a graduate student at the tree-ring laboratory, was tasked with returning to Wheeler Peak to see if he could find a living tree older than the one chopped down by Currey. He didn’t.

And the purloined tree was left to lie on the mountainside for the scientists who followed, seeking the knowledge of centuries past contained in its rings. Ferguson collected some of the wood, and brought it back to the UA. 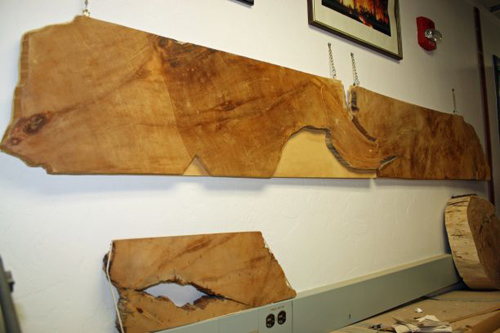 The 7-foot radius of Prometheus, the oldest individual organism ever known, adorns the wall of the UA Laboratory of Tree-Ring Research. (Image by: Beatriz Verdugo/UANews)

The age of the ancient one

Wander down the concrete stairs to the basement on the northwest corner of the Math East building on the UA campus to a shut door bearing the somewhat ominous sign: “Please keep this door closed. The Fire Marshall requires that we do this!”

Past the door you will find the cause of the fire marshall’s concern: Boxes full of wood, circular cross sections of tree trunks, whole logs and branches, boards and remnants of dead wood fill up rows of shelves – and oftentimes the aisles – from the sawdust-strewn floor to the dusty ceiling.

On one wall, a 7-foot slab of wood is mounted with care: A cross section of the radius of the tree known as Prometheus.

A second collection of wood from Prometheus came to the UA only a few years ago, after Currey’s passing. Among this collection was a piece containing the pith, the center of the tree. For the first time, a tree-ring scientist was able to date the wood to establish Prometheus’ age.

By overlapping the rings on the pith piece with a chronology of measured ring-widths from trees in the region provided to him by fellow UA dendrochronologist Matt Salzer and UA Regents’ Professor Malcolm Hughes, Baisan established the age of the tree with great accuracy.

“I had never seen a piece with the pith and was curious to see where it dated,” Baisan said. “The match was really unequivocal from the first test. A reasonable age estimate is right at 5,000 years – an estimate because of the time to grow to about 7 feet, the height from which the piece with the pith came, is subject only to a reasonable guess.” 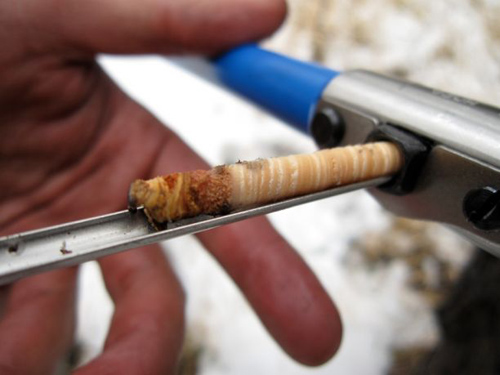 A dendrochronologist extracts a thin core from a tree using a tool called a Swedish increment borer. The method leaves only a tiny hole in the tree’s trunk. The tree’s annual growth rings are visible as thin bands on the core. (Image by: Daniel Griffin/LTRR)

Prometheus is not alone in its great age. Many of the other trees in the grove on Wheeler Peak also are estimated at near 5,000 years old, although none have been found that are as old as Prometheus.

“The odds of by chance selecting the oldest individual of a species of hundreds of thousands, or millions, of individuals spread across the rugged and remote Great Basin terrain are simply not credible,” Baisan said.

“I cannot believe that Prometheus was ever ‘the oldest’ Bristlecone pine. As for finding an older individual,” he added, “this would be a difficult and thankless task for which there is no real research incentive.”

Now the oldest publicly known individual, named Methuselah after the oldest person mentioned in the Bible, and known to be more than 4,700 years old, abides upon a slope of the White Mountains of eastern California. Its exact location is not advertised in an effort to protect the tree from a plight of tourists and plunderers.

And Currey? “His career was OK,” Adams said. “To most people, he was just professor Currey. Nothing bad happened to him, except he died relatively young, and that’s the mysterious part.” 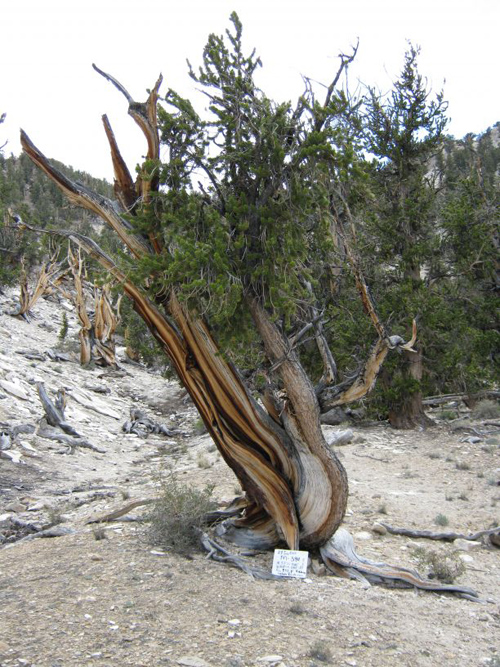 A Bristlecone pine on Wheeler Peak. (Image by: Rex Adams/LTRR)

The curse of the old trees

“There’s this urban myth that goes with the Bristlecone,” Adams explained. “That handling the wood, you’re going to be cursed by the old trees.”

From Edmund Schulman, the dendrochronologist who first established the great age of the Bristlecone pines and died himself at 49, to Currey, Ferguson and other Bristlecone pine researchers, many have died at an alarmingly young age. In one incident, a 32-year-old Forest Service employee who returned with Currey and others to remove the chopped-up pieces of Prometheus from the mountainside suffered a fatal heart attack on the way down.

As improbable as the myth may seem, its portents are dark enough to prevent some from ever touching the wood of the Bristlecones, especially that of Prometheus.

But the myth hasn’t kept all contemporary dendrochronologists away from the old trees. “There are some folks now who are fiddling with the wood,” Adams said. “Some researchers here are working on climatic effects on Bristlecone.”

And then there’s Adams himself. “I’ve handled a lot of old wood, and I’m sitting here now holding a piece that really is supposed to be the cursed piece.” He cradled the pith piece of Prometheus in one arm. “But then I am showing my age these days,” he added and laughed. “So maybe I shouldn’t be touching this.”

He leaned over and gently lay down on the table the remnant of a tree that once weathered the storms of millennia atop lonely Wheeler Peak.