Technology in the Classroom

UD students use iPads to study the presidential election

Ralph Begleiter and Paul Brewer, professors in the University of Delaware’s Department of Communication, wanted to see if students enrolled in their Road to the Presidency class would pay more attention to the presidential election if media were at their fingertips 24/7. Through a UD Information Technologies (IT) Transformation Grant, iPads were distributed to students enrolled in the course.

“There is something about a student laying their finger on the iPad and discovering what event occurred to make a jump in public opinion popularity occur. It’s that interactivity that makes it a personal experience for the student,” Begleiter observed.

The students used the iPads every day, sharing instant reactions to old campaign ads and public opinion polls on the class Facebook group, which, to the surprise of both Brewer and Begleiter, was a primary source of communication between students. Watch the full video interview.

Begleiter, who is also the director of UD’s Center for Political Communication, noted students often continued the discussion beyond class meetings. “I would log on sometimes at night and students were still exchanging opinions about something that had happened in the election campaign,” he said. 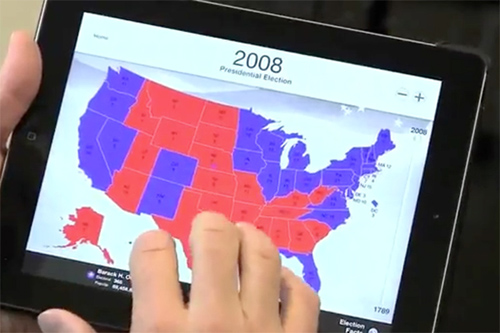 Students enrolled in Road to the Presidency followed the 2012 election with iPads, thanks to a UD Information Technologies Transformation Grant. Image credit: University of Delaware

Brewer, the associate director of the Center for Political Communication, explained, “The biggest goal was to get students to interact with one another, which is what made the combination of the iPads and Facebook so great. The students could talk to each other in real time, which we saw a lot of at live events.”

The class compared data from the 2008 campaign and attended several events, including the Delaware debates, the Center for Political Communication’s National Agenda speaker series and a debate between Karl Rove, a Republican political strategist, and Robert Gibbs, a Democratic political strategist.

Begleiter and Brewer frequently used the iPads to poll students and demonstrate how their peers felt about political events or technology use. One of the polls asked students who they believed had won the Rove-Gibbs debate. A majority, 56.25 percent, said it was a tie.

Brewer conducted a study with several graduate students to gauge student’s use and opinions, finding that, while students had a multitude of apps at their disposal, they only relied on a handful. “We asked the students to install about twenty-five apps ranging from news to information aggregators like Real Clear Politics,” Brewer added, “but they tended to rely on news apps such as The New York Times and Washington Post for information.”

Another poll found that 40.63 percent percent of the class relied on traditional media, like a newspaper, whereas only 15.63 percent relied on social media for information, which the professors found to be an interesting outcome.

Begleiter and Brewer will be presenting their findings and experience at the Winter Faculty Institute, Jan. 22. Registration for this event is still open.