Research underway at the Georgia Tech Research Institute (GTRI) could enable fixed-wing jet aircraft to take off and land at steep angles on short runways, while also reducing engine noise heard on the ground. 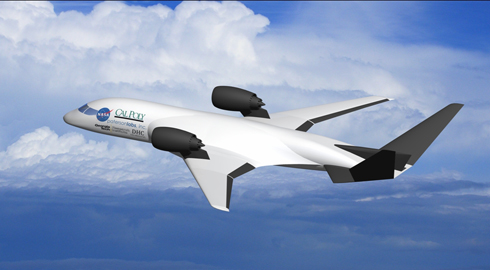 About the image: This computer-generated graphic shows a model of the cruise-efficient, short take-off and landing (CESTOL) aircraft design that GTRI researchers are investigating. Image credit: California Polytechnic State University

Airplanes of this type – called cruise-efficient, short take-off and landing (CESTOL) aircraft – could use runways at much smaller airports, allowing expansion of commercial jet service to many more locations.

Enabling commercial jets to take off and land in ever-shorter distances is an ongoing goal for aircraft designers, and several approaches are under development.  GTRI’s research could result in a CESTOL aircraft comparable to a Boeing 737 in size, with a similar ability to carry 100 passengers at up to 600 miles per hour.

“To take off or land on a short runway, an aircraft needs to be able to fly very slowly near the runway,” said Robert J. Englar, a principal research engineer who is leading the GTRI effort. “The problem is that flying slowly decreases the lift available for taking off and landing.  What’s needed is a powered-lift approach that combines low air speed with the increased lift capability required for successful CESTOL operation.”

The work is part of the NASA Hybrid Wing-Body Low-Noise ESTOL Program.  This four-year program, funded by NASA and led by California Polytechnic State University, includes GTRI and several other team members.  GTRI’s current work involves leadership of the aerodynamic and acoustic design for the program, along with development of large-scale models that will be used for wind-tunnel testing at government facilities. 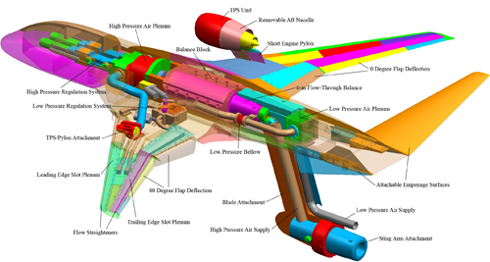 About the image: This graphic shows a cut-away view of the cruise-efficient, short take-off and landing (CESTOL) aircraft design that GTRI researchers are investigating. Image credit: California Polytechnic State University

At the heart of GTRI’s powered-lift design is circulation control wing – also known as blown-wing – technology.  In this type of system, high-speed jets of air are directed over the upper surface of the wings during take-off and landing, creating an unprecedented lift capability.

“Our design has to incorporate several trade-offs, yet the entire wing-engine powered-lift system has to perform all of its functions well,” said Englar, who leads the aerodynamics portion of GTRI’s work.

Specifically, he said, the new design must:

To satisfy those requirements, the GTRI team placed turbo-fan engines above the wing of the conceptual CESTOL aircraft, rather than below the wing as on most commercial aircraft, explained Rick Gaeta, a former GTRI senior research engineer who had led the acoustic portion of the research. 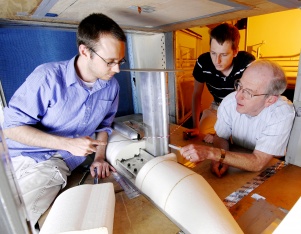 But the lift generated by conventional wings isn’t sufficient for the low flight speeds and steep ascents and descents required by CESTOL aircraft.  The essential element in such extreme lift is circulation control / blown-wing technology.  This approach can far exceed mechanical flaps in achieving high lift coefficient (a lift coefficient is a number that relates an aircraft’s total lift to its wing area and flight speed).

However, that single wing flap is used in tandem with a novel element based on circulation-control technology. A narrow slot, capable of pneumatically blowing out air, runs along the entire trailing edge of each wing, just above the flap.  This system is powered by its own compressed air source located inside the wing.

The wing flap, which forms a sharp trailing edge during level flight to reduce drag, rotates downward on take-off and landing. When thus rotated, it forms a highly curved aft surface; then air from the slot can be blown over that curved surface to generate high lift.

This procedure, called flap-blowing, performs two functions:  it increases air velocity over the top of the wing, and it deflects the ambient wind stream downward so that it curls under the wing.  The combined forces generate a lift coefficient that can be two to four times higher than a conventional mechanical flap.

To achieve even higher lift than flap-blowing alone, the GTRI design takes advantage of an additional phenomenon – the interaction between the air coming from the wing slot and the exhaust of the plane’s over-the-wing jet engines.

During take-off and landing, air flow from the slot interacts with the engine exhaust and pulls this powerful exhaust blast down onto the wing.  This process, called entraining the exhaust, greatly increases the velocity of the air passing over the wing and results in highly augmented upward suction and lift.

“This strategy allows an aircraft to be flying at a very low speed, while the wing is seeing much higher relative wind speeds on its curved upper surface due to this blowing and thrust-entraining combination,” Englar said. “We have measured lift coefficients between 8.0 and 10.0 on these pneumatic powered-lift wings at a level flight condition during testing.  The normal lift coefficient on a conventional wing at a similar flight condition is less than 1.0.”

The benefit of an above-the-wing engine configuration is not limited to providing good short takeoff and landing (STOL) performance.  It also provides two potential sources of noise reduction:  engine-noise shielding and reduced noise footprint in the community.

Gaeta explains the noise-shielding issue by noting that today’s commercial jets have their engines under the wings.  During take-off and approach, a great deal of noise from these jets propagates downward unimpeded, while engine sound that does travel upward bounces off the wing and then reflects downward.

“By putting the noise source above the wing, there is the potential to shield the ground from engine noise, at least partially,” Gaeta said.

The critical design choice in noise shielding involves where to place the engine relative to the wing, he explained.   Closer to the wing helps take-off and landing performance, but it increases noise due to viscous rubbing of the jet exhaust stream acting along the wing upper surface.  Further away from the wing is better from a noise perspective, but not as effective for take-off and landing performance.

Finally, to the extent that placing the engine above the wing can shield exhaust noise, the engine needs to be placed as far forward as possible because maximum jet noise occurs at the exhaust exit, Gaeta said.   Moreover, all of these design choices must not detract from the crucial issue of cruise performance.

The very nature of a STOL flight trajectory – steep takeoff and approach angles – offers another potential noise benefit.  This trajectory keeps much of the offending noise closer to the airport environs.

Explains Gaeta:  “By virtue of steeper takeoff and approach angles, the STOL aircraft can potentially keep its most offending noise within the airport boundary because it is farther from the ground when it passes over communities.”